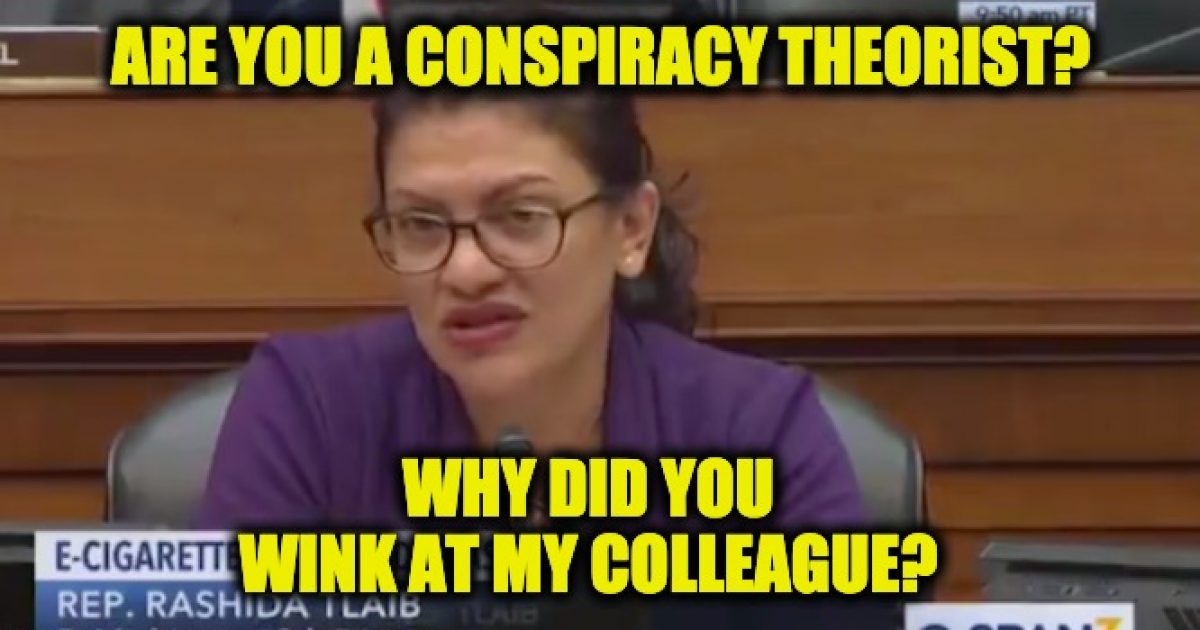 Rep. Rashida Tlaib (D-MI) let the crazy train rumble off the tracks when she asked a witness at a congressional hearing if she was conspiracy theorist, then immediately accused her of a conspiracy for winking at a colleague.

The House Oversight Committee hearing was an investigation of recent instances of lung disease that have been tied to vaping and the CDC warning against the use of e-cigarettes. Vicki Porter, who credits vaping for helping her quit smoking regular cigarettes, was the witness.

“Quitting smoking is very, very, very hard. Nobody tells you that,” Porter told members of Congress. “Vaping is a health miracle to me because without it, I would probably be on my way to a lung cancer diagnosis.”

Tlaib responded by getting strange.

“Ms. Porter, I was reading because I want to know more about you and your beliefs, and I respect that we all have different beliefs, but you call yourself a converted conservative and reformed Marxist?” Tlaib asked. “Are you a conspiracy theorist?”

When Porter responded that “my politics are entirely irrelevant to this hearing,”

Rep. Tlaib introduced a conspiracy theory of her own:

“Oh, okay. Why were you winking at one of my colleagues on the other side of the aisle?” She asked.

“Because I know Glenn Grothman. He introduced me, he’s a friend of mine.”

Tlab either wasn’t paying attention, or perhaps her meds kicked in because when Rep. Glenn Grothman (R-WI) introduced her to the committee at the beginning of the hearing, he said Vicki Porter was a good friend.

Following Porter’s response that she knew Tlaib’s colleague, Tlaib countered: “I didn’t know what the winking was. I thought maybe there was like a conspiracy thing going on.”

Maybe Tlaib thought Ms. Porter was Jewish, so she felt there was some sort of conspiracy after all the Congresswomen is an anti-Semite.

This is absolutely insane to watch, and Exhibit A on why unhinged, uneducated, lunatics have no place in Congress …

Porter, throughout the exchange, carried an exasperated and nervous smile on her face as if she’s just realized how insane the person questioning her really is.

Believe it or not, things actually got worse in the less than 90-second exchange. Tlaib, intent on pushing the leftist agenda that vaping needs to be regulated or banned by the government, suddenly accused Porter of lying about quitting smoking.

Porter responded, “I’m not smoking, and I’m not lying under oath.”

The Michigan Congresswoman clearly has the foot-stomping, temper tantrum throwing, emotional intelligence of a Greta Thunberg. She’s an embarrassment to her peers.

This past July, President Trump mocked Tlaib over video showing her being forcibly dragged out of a campaign event in 2016 by Secret Service agents, noting that she’s “a crazed lunatic.”

“She’s like a crazed lunatic. She’s screaming just before she got into Congress. Who elected her?” Trump questioned. “She’s screaming like a total lunatic at one of our rallies.”

This congressional hearing does nothing to disprove the notion that Tlaib is, in fact, a total lunatic (along with being an anti-Semite).