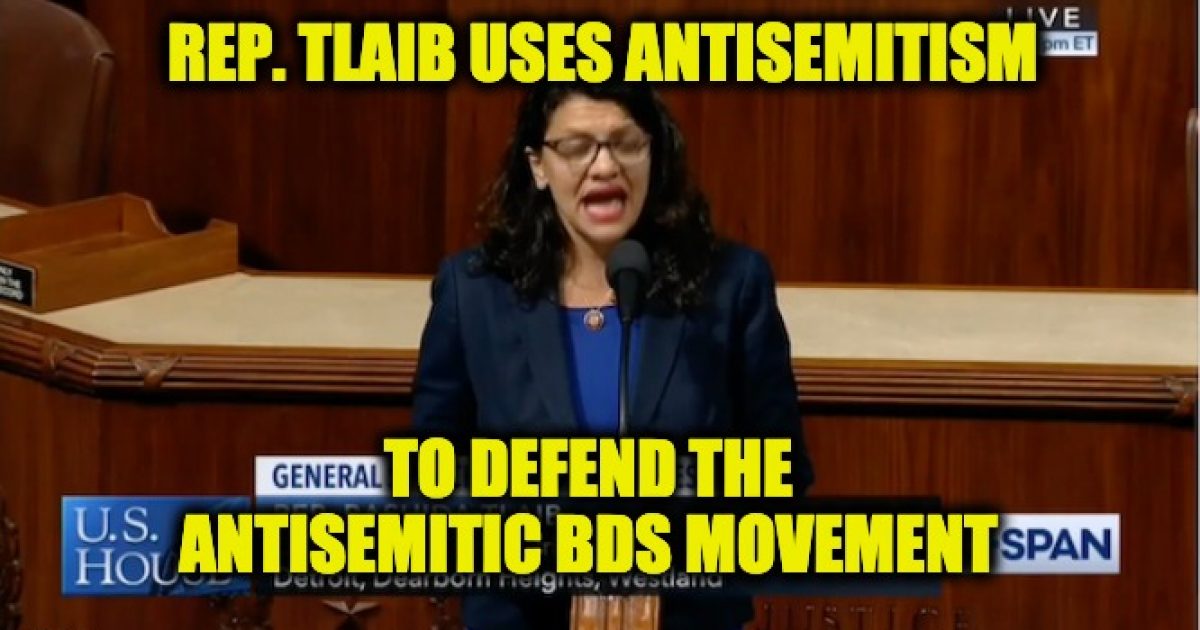 Rashida Tlaib part of the Anti-Semitic “Squad” who have become the de-facto leaders of the Democratic Party, has spoken out on the House Floor against a bipartisan resolution opposing the Anti-Semitic boycott, divestment, and sanctions (BDS) movement. Ironically according to Tlaib, this anti-Semitic movement is the equivalent of the boycotts of Nazi Germany in the 1930s and 1940s. Her words themselves are an example of Antisemitism according to the U.S. State Department’s definition of Jew-hatred.

The BDS movement has just one purpose, to delegitimize Israel and to deny the Jewish people their right to self-determination. The present leaders of the BDS movement support a “one-state solution.” Which will destroy Israel as the Jewish state.  Both the U.S. State Department and Pope Francis have declared that denying that the Jews have the right to have their own country, is a form of Antisemitism.

As for Tlaib’s statement, it too was anti-Semitic:

Some of this country’s most important advances in racial equality and equity and workers’ rights has been achieved through collective action, protected by our constitution. Americans of conscience have long and proud history of participating in boycotts, specifically to advocate for human rights abroad. Americans boycotted Nazi Germany in response to dehumanization, imprisonment, and genocide of Jewish people.

Tlaib is blaming Israel for all of the Palestinian’s problems and comparing the Jewish States to the Nazis. Ignoring the fact that what she calls occupied territory was never part of a “Palestinian state.” Besides the fact that there has never been a Palestinian state in the history of the world, before 1967, Judea and Samaria (commonly known as the West Bank) was Jordanian land and the Gaza Strip (which Israel abandoned fourteen years ago).

She blames Israel, but Palestinian Arab refugee camps were created by the Arab League and especially Egyptian President Nasser. Nasser figured out that it would make a great weapon against Israel (he was right). He knew that by forcing them into “camps” rather than allowing them to be absorbed by the countries they settled in, the Palestinians would remain the Arab Leagues best weapon against the Jewish State.

1948 the UN estimated the number as 711,000 refugees. At the time, there was more than one “Middle East Refugee” problem. People forget there were  850,000 Jews in Arab nations that were thrown out of Arab countries. Perhaps that they were forgotten because Israel absorbed those refugees as part of her population.

Per the State Department, along with not recognizing that the Jews have a right to a state, other examples of how anti-Semitism manifests itself concerning Israel include, “drawing comparisons of contemporary Israeli policy to that of the Nazis” and “blaming Israel for all inter-religious or political tensions.” 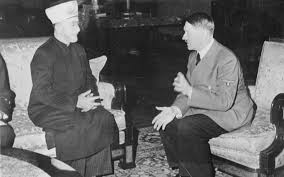 Tlaib forgot to mention that Hitler had the help and support of the Grand Mufti of Jerusalem or that the Palestinian Authority has banned Jews from living in their territory.

But she did say, “All Americans have the right to participate in boycotts, and I oppose all legislative efforts that target speech.”  Many boycotts are considered free speech, but some boycotts like BDS are regarded as examples of bigotry.

Is it right to boycott a country because of its faith like BDS? Can we boycott because of Skin color?  What if someone wanted to boycott any business owned by African-Americans? Or Muslims? Should people boycott Saudi Arabia because it is primarily Sunny Muslim? Or Lebanon because it’s Shia? Maybe we should never go to Brazil because the majority of its citizens are Catholic.

The mission of the Department of Justice Civil Rights Division is to enforce federal statutes prohibiting discrimination based on race, color, sex, disability, religion, familial status, and national origin.  This resolution supports that mission.

Below is a video of Tlaib’s speech on the House Floor and underneath the video is the text of the resolution to which the anti-Semitic Rep. Tlaib objected.

Opposing efforts to delegitimize the State of Israel and the Global Boycott, Divestment, and Sanctions Movement targeting Israel.

Opposing efforts to delegitimize the State of Israel and the Global Boycott, Divestment, and Sanctions Movement targeting Israel.

Whereas the democratic, Jewish State of Israel is a key ally and strategic partner of the United States;

Whereas since Israel’s founding in 1948, Congress has repeatedly expressed our Nation’s unwavering commitment to the security of Israel as a Jewish and democratic state;

Whereas American policy has long sought to bring peace to the Middle East and recognized that both the Israeli and Palestinian people should be able to live in safe and sovereign states, free from fear and violence, with mutual recognition;

Whereas support for peace between the Israelis and Palestinians has long-standing bipartisan support in Congress;

Whereas it is the long-standing policy of the United States that a peaceful resolution to the Israeli-Palestinian conflict should come through direct negotiations between the Government of Israel and the Palestinian Authority, with the support of countries in the region and around the world;

Whereas it is a hallmark of American democracy for citizens to petition the United States Government in favor of or against United States foreign policy;

Whereas cooperation between Israel and the United States is of great importance, especially in the context of rising anti-Semitism, authoritarianism and security problems in Europe, the Middle East, and North Africa;

Whereas the Global Boycott, Divestment and Sanctions Movement (BDS Movement) targeting Israel is a campaign that does not favor a two-state solution and that seeks to exclude the State of Israel and the Israeli people from the economic, cultural, and academic life of the rest of the world;

Whereas the BDS Movement targets not only the Israeli government but also Israeli academic, cultural, and civil society institutions, as well as individual Israeli citizens of all political persuasions, religions, and ethnicities, and in some cases even Jews of other nationalities who support Israel;

Whereas the BDS Movement does not recognize, and many of its supporters explicitly deny, the right of the Jewish people to national self-determination;

Whereas university-based BDS efforts violate the core goals of the university and global cultural development, which thrive on free and open exchange and debate; and

Whereas the BDS Movement promotes principles of collective guilt, mass punishment, and group isolation, which are destructive of prospects for progress towards peace and a two-state solution: Now, therefore, be it

Resolved, That the House of Representatives—

(1) opposes the Global Boycott, Divestment, and Sanctions Movement (BDS Movement) targeting Israel, including efforts to target United States companies that are engaged in commercial activities that are legal under United States law, and all efforts to delegitimize the State of Israel;

(2) affirms that the Global Boycott, Divestment, and Sanctions Movement undermines the possibility for a negotiated solution to the Israeli-Palestinian conflict by demanding concessions of one party alone and encouraging the Palestinians to reject negotiations in favor of international pressure;

(3) urges Israelis and Palestinians to return to direct negotiations as the only way to achieve an end to the Israeli-Palestinian conflict;

(4) supports the full implementation of the United States-Israel Strategic Partnership Act of 2014 (Public Law 113–296; 128 Stat. 4075) and new efforts to enhance government-wide, coordinated United States-Israel scientific and technological cooperation in civilian areas, such as with respect to energy, water, agriculture, alternative fuel technology, civilian space technology, and security, in order to counter the effects of actions to boycott, divest from, or sanction Israel; and

(5) reaffirms its strong support for a negotiated solution to the Israeli-Palestinian conflict resulting in two states—a democratic Jewish State of Israel, and a viable, democratic Palestinian state—living side-by-side in peace, security, and mutual recognition.