Former Iranian President Rafsanjani Was NOT A MODERATE 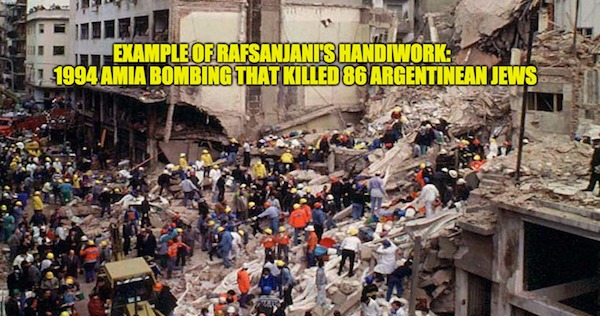 Former Iranian president Ali Akbar Hashemi-Rafsanjani died on January 8th of a heart attack at the age of 82. A central figure in the Islamic Republic hierarchy since its inception, Rafsanjani tricked every U.S. president since Ronald Reagan into believing he was a “moderate,” somehow opposed to the “hard-liners” in charge of the regime’s affairs. In fact, Rafsanjani operated at the core of the regime and supported its doctrine of absolute clerical rule and its terrorist operations, from the taking of U.S. hostages in Lebanon to the bombing of U.S. servicemen in Dahran, Saudi Arabia, including Iran’s support for al Qaeda and the 9/11 plot.

Rafsanjani was indicted in Argentina for his role in the AMIA bombing that killed 86 Argentinean Jews in 1994, and was also cited in the 1996 Mykonos murders in Germany for his role in directing “hit squads” that assassinated Iranian opposition leaders living overseas. He was also named as a defendant in Havlish v. Islamic Republic of Iran, litigation brought by family members of 9/11 victims against the Iranian regime that led to a $6 billion judgment against the regime and against Rafsanjani personally.

Rafsanjani invited nuclear scientists to return from exile in the mid-1980s and is widely viewed as the “father” of Iran’s covert nuclear weapons program, having famously declared his belief that Iran could destroy Israel with a single nuclear weapon. (“The use of an atomic bomb against Israel would destroy Israel completely, while the same against Iran would only cause damages. Such a scenario is not inconceivable,” he said in a sermon at Tehran University on Dec. 14, 2001).

The wily pseudo-moderate provided cover to Khamenei and other “hard-liners” by offering them a life-line to the West, and is widely credited with having pushed hard for the Iran deal with the United States and the EU-3.

Nevertheless, in recent years his power has been challenged by the IRGC, which arrested his own children (since released) and protegés, including members of Atieh Bahar, a consulting company established by Iranians in the United States with the goal of helping foreign companies do business in Iran.

Rafsanjani’s reach continues to be on display in the United States, where his sympathizers include the editor of Voice of America’s Persian News Network, Mohammad Manzarpour. When Rafsanjani’s death was announced, Manzarpour changed his Facebook page to a well-known Koranic verse used to express sympathy for someone who has just died.

Despite what you may have read in the news, former Iranian President Rafsanjani was not a moderate. 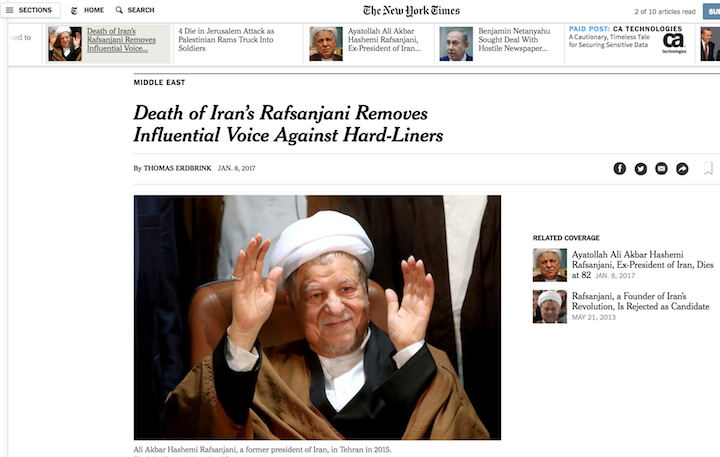 Reposted with permission from Iran.org, the website of the Foundation for Democracy in Iran.

Along with being President and CEO of Iran.org, Timmerman is an internationally renown investigative reporter and a NY Times best-selling author,  Kenneth Timmerman is one of the half-dozen true experts on the Islamic Republic of Iran in the U.S. today. Since 1995, he has run the Foundation for Democracy in Iran (iran.org) and regularly meets with Iranian dissidents overseas. He lectures on Iran at the Pentagon’s Joint Counter-Intelligence Training Academy.