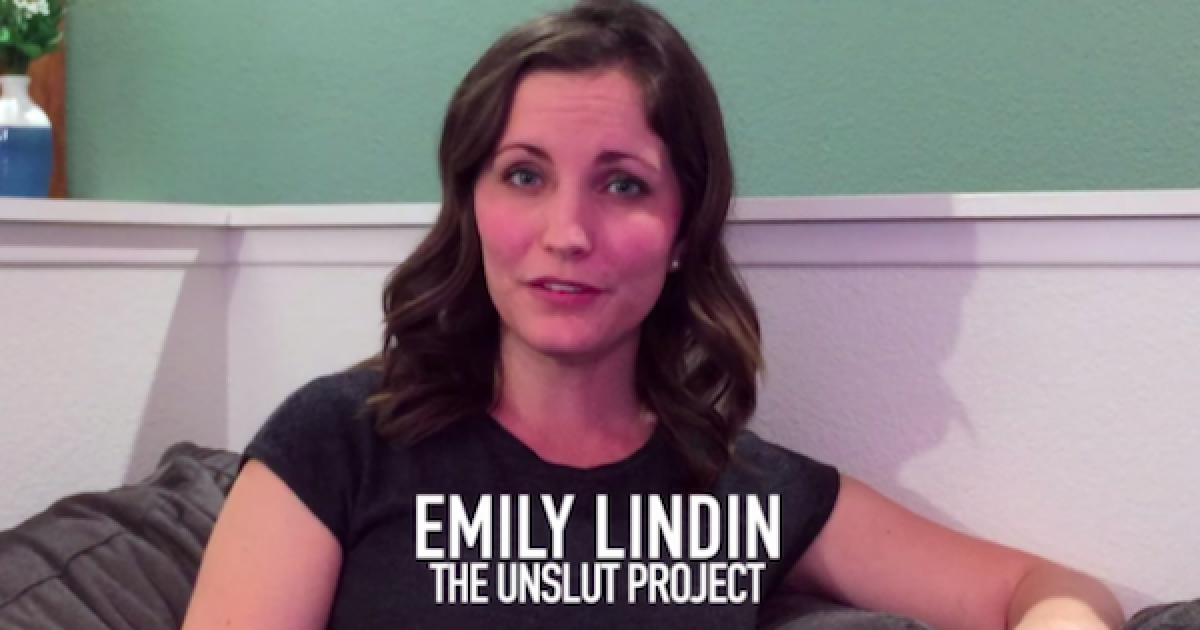 An extremist, hate-filled, liberal feminist who peddles her lies to children as a bloviator for Teen Vogue magazine has proclaimed that it is OK if the lives of some innocent men are destroyed by false allegations of sexual harassment as long as the eventual end of those accusations results in the dismantling of the “oppressive Patriarchy.”

Yes, what we have here is yet another far left, “the ends justify the means” argument. It is the same argument Soviet dictator Joe Stalin made when he murdered tens of millions of his own citizens so that he could create the perfect communist paradise — a project that cost much blood but ultimately failed miserably.

You know another such saying, I’m sure: “you have to break a few eggs to make an omelet.”

The proclamation belongs to columnist Emily Lindin who jumped to her Twitter account on November 21 to reveal her “unpopular opinion” that she doesn’t mind false accusations against men, Daily Wire reported. 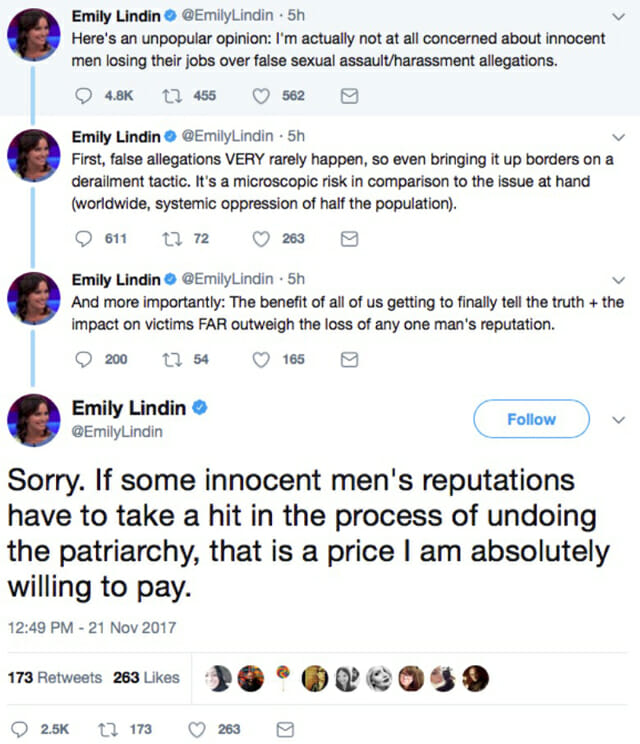 [Note, I had to use a screenshot for her tweets because after a firestorm of condemnation swept over her, she set her account to “protected” so the general Twitterverse can no longer see her blather.]

The upshot, here, is that Lindin believes that all men are rapists and oppressors who need to be destroyed — you know, even if they’ve never actually perpetrated any raping or oppressing.

Strangely, Lindin also presents herself as a person who believes in “gender equality” and one who stands against “sexual bullying.” Unfortunately for her, her Tuesday tweetstorm pretty much shows she is a liar because every single word of her post reeks of sexual bullying and an assumption of the superiority of women.

Lindin, who runs a far left outfit she has termed the “UnSlut” project, is like many an arrogant liberal who is incapable of thinking through her loudmouthed proclamations. This tweetstorm was a perfect example of it as, eventually, blacks and other feminists were forced to come out to totally destroy her for her tweets.

Many feminists and minorities who might otherwise agree with her far left views pointed out that if all men are slammed with false sexual harassment charges, that would naturally mean that many black men would be included in that sector. Needless to say, her liberal pals were not amused.

Further, they noted that black men have already been the brunt of false charges of sexual harassment (can I introduce Lindin to the case of Emmett Till, here?) and by her new rules it would become an avalanche of accusations against minorities.

Here are a few examples of a tweet that slammed Lindin’s ill-thought-out idea.

You don’t care that innocent men of color are disproportionately accused in colleges, and punished without due process, in ways that ruin their lives? Your feminism is comfortable with blatant racist scape-goating?

I’m glad she said this.

It’s 100% wrong and immoral, but it’s important we see our enemy’s real, illiberal, face. This is the left, folks. Nothing liberal about them. Reject them. Reject them 100% of the time.#FeminismIsCancer #PresumptionOfInnocence #DueProcess https://t.co/LZ1qPGlqeV

Why you should reject Progressives reason 12,351 https://t.co/YIDwHqcOIL

Filmmaker and @TeenVogue columnist admits she doesn’t give a damn about ruining innocent people in the crusade against the Patriarchy.

This is why ‘social justice’ is a misnomer.
This nothing more than standard self righteous zealotry. https://t.co/py7M6oRZEI

There were dozens just like this. After she was inundated with tweets like that from people on her own side, she soon announced that she maybe spoke too fast and began trying to qualify her initial tweet.

Sadly, it was too late. She lived by that old adage, “don’t sit quietly and let people think you are a moron. Speak up and prove them right.”