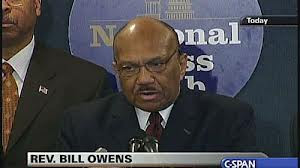 In a despicable case of prejudice, bigotry, racism and possibly even jay-walking, a group of African American pastors held a press conference attacking President Obama’s for his stance on same-sex marriage.

The group Coalition of African-Americans Pastors, led by the Rev. Williams Owens says they will be launching a national campaign aimed to convince African Americans to re-think their overwhelming support of Obama and his attack on families.

“The time has come for a broad-based assault against the powers that be
that want to change our culture to one of men marrying men and women
marrying women,” said Owens, in an interview Tuesday after the launch
event at the National Press Club. “I am ashamed that the first black
president chose this road, a disgraceful road.”

At the press
conference, Owens was joined by five other black regional pastors and
said there were 3,742 African-American pastors on board for the
anti-Obama campaign.

When asked at the press conference for
specifics about the campaign – funding, planned events and goals – Owens
said only that the group’s first fundraiser will be on August 16 in
Memphis, Tennessee. But Owens insisted that “we are going to go
nationwide with our agenda just like the president has gone to
Hollywood.”

Owens also said that the first Black President was taking the black vote for granted and was upset that the NAACP claimed the gay rights moment was similar to the civil rights movement.

A Pew Research Center poll conducted in April found that 49% of African-Americans oppose legalized same-sex marriage, compared with 39% who support it. But that shows a softening on the position in recent years; In 2008, only 26% of blacks were in favor of same sex marriage, according to the same Pew poll.

At the same time, black voters overwhelmingly supported Obama in 2008, while more recent polling shows a nearly equal level of support for the president’s 2012 reelection.

Whether this has an effect on the vote or not is not the issue.  The important thing about Rev. Owens is his attack on this President are obviously racially motivated and is one more example of how white people are uncomfortable with with the color of Barack Obama’s skin. True the Reverend is also a person of color, but I am sure Cookie Roberts would say that George W. Bush did a Vulcan mind meld on the poor pastor and made him act racist.