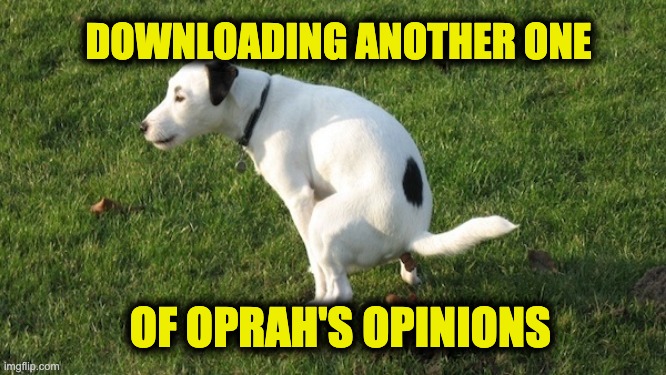 Get ready for your eyes to roll all the way back into your head with this one. RACIST Oprah Winfrey

During a recent episode of Oprah’s online show, The Oprah Conversation, she brought on several guests to discuss “racism,” “white privilege,” and “whiteness.” One of her guests was Emmanuel Acho, a former NFL linebacker who has made millions playing a sport. Acho started a YouTube series called Uncomfortable Conversations with a Black Man where he talks about race relations. In the first two minutes of one show on Interracial Relationships, Acho seems to take the position that his audience is racist or at least “uncomfortable” with interracial couples. Having been part of one myself for more than 25 years with zero flak, that was all I needed to see to know that the series is filled with bullcrap.

In a moment that is a clear self-awareness fail, the Billionaire who was an influencer before influencers were a thing, said that America has a “caste system” based on race and that white people are at the top.

“There are white people who are not as powerful as the system of white people—the caste system that’s been put in place—but they still, no matter where they are on the rung, or the ladder of success, they still have their whiteness.”

I might still have my whiteness, but Oprah still has that $2.6 billion–she is much higher up on the totem pole than any of us normal people no matter what their skin color may be.

He also said that he tells his white friends, “Y’all live in a white cul-de-sac, in a white neighborhood, in a white city, in a white state. If you were not careful, your children will live their whole life white, and at [the ages of] 26, 27, they’ll end up being a part of the problem, because you just let them and allowed them to live a completely white, sheltered, and culture-less life.”

But, wait–white people have no culture?

And seriously, is this a thing in America–in the suburbs? Really? I guess it’s possible. I live in an extremely diverse, moderate sized-city, so my own experience is very different.

Now that is a take right there. So…white people are the problem and you need a white savior to fix the problem for you? That’s not what Acho means, but clearly it can be taken that way. What he means is that white people need to deal with their own tendency toward bigotry. Take, for example, Winfrey spoke to a Jewish man named Seth, a self-described Liberal who grew up in Manhattan in the 1970s, who became “woke” and realized that he was actually racist–as a matter of fact, he says that it wasn’t possible for him to not be racist.

“You’ve become ‘woke’ during this period, and realized in that awakening that you are racist, right?” Oprah asked. “I just want to know how that happened.”

No Seth, speaking as a Jew to another Jew, you aren’t racist, as we say in the mamaloshen (Yiddish) you are a meshuggeneh (crazy person)

It is quite something to watch a millionaire and a billionaire–both of whom happen to be black–do the “blame whitey” thing.

We probably shouldn’t be surprised. Oprah just signed on to fund movies, tv shows, and other content to bring the ahistorical, discredited 1619 Project to life on every possible screen.

On Tuesday, Oprah promoted the book Caste for her Book Club. It’s about racism and the “unspoken caste system that has shaped America.” She says that it’s full of “a-ha! moments.” Sure, Oprah. Sure–more like UH-Uh moments.

My next @oprahsbookclub pick, “Caste” by @Isabelwilkerson, should be required reading for humanity. It eloquently examines the unspoken caste system that has shaped America. Download a copy on @AppleBooks here: https://t.co/cAkzEPCFL3 #ReadWithUs pic.twitter.com/9WAXk7QP9r

No word on if Oprah will be denouncing Al Sharpton for the anti-Semite that he is. Or Ice Cube. Or Nick Cannon. Oh, but that’s “whataboutism” right? Maybe. But it’s certainly a problem in certain parts of New York and New Jersey–and it’s not just isolated incidents. Louis Farrakhan is still considered an inspiring person in the black community despite his repeated racist statements.

Can we all just stop with the racism now? Like…all of us?

Oh, right, I forgot that the left literally redefined racism so that it’s ok to be overtly bigoted against white people since they are in “positions of power” which proves that there is “systemic racism” in America.

It’s one thing for random leftists on Twitter to say that America is systemically racist and is designed to keep African Americans under the power of white elites, it’s quite another to have the New York Times win a Pulitzer Prize for a work of fiction disguised as history that even the author says isn’t about history but about narrative.

I’ve always said that the 1619 Project is not a history. It is a work of journalism that explicitly seeks to challenge the national narrative and, therefore, the national memory. The project has always been as much about the present as it is the past.

If I did that, I’d be labeled “fake news” and have my little corner of the internet taken away. But she’s a New York Times journalist, so it’s fine. I’ll keep my tiny corner of the internet and my integrity, thanks. Oh, and I’m not a flaming, overt racist so I can look myself in the mirror with a clean conscience, so…there’s that.

Frankly, I’m more with Charles Barkley than with Oprah, Acho, and Hannah-Jones on this one.

Charles Barkley: ‘I Don’t Understand How You Beat Hatred With More Hatred’

Barkley seems to be closer than Oprah to Rev. Dr. Martin Luther King Jr. on this issue, and well, that’s a good place to be if you ask me.