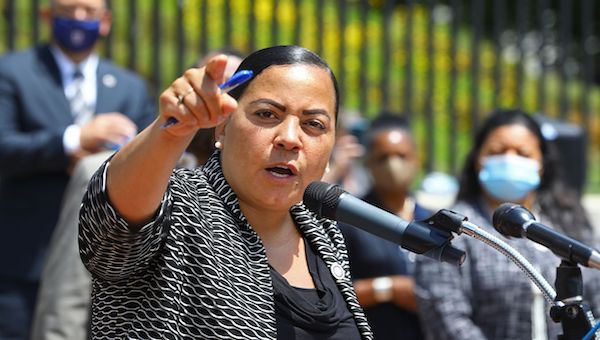 Lawlessness has been rampant in the United States now for some time. Rachael Rollins, the current Massachusetts Suffolk County District Attorney, is Biden’s nomination for US Attorney in Massachusetts. But her track record as a prosecutor is iffy, which is why the Senate Judiciary Committee vote ended in a tie: 11 Democrats for, 11 Republicans against. And she published a statement on her website about what charges should always be declined. She also advocates defunding the police, according to a press release by Senator Ted Cruz. If confirmed, which could easily happen, she would have immense power to not prosecute federal offenses.

Suffolk County includes the cities of Boston, Chelsea, Revere, and Winthrop. For her part, Rollins says her policies help steer people away from the criminal justice system. Is that good or bad? It depends on the situation.

She listed several charges in which she stated the default is to decline prosecution. These are offenses from the Massachusetts state/local level – not federal ones. Would she actually not prosecute certain federal offenses? Possibly. She would also be the first ‘woman of color’ in the position.

Instead of prosecuting, these cases should be (1) outright dismissed prior to arraignment or (2) where appropriate, diverted and treated as a civil infraction for which community service is satisfactory, restitution is satisfactory or engagement with appropriate community-based no-cost programming, job training or schooling is satisfactory. In the exceptional circumstances where prosecution of one of these charges is warranted, the line DA must first seek permission from his or her supervisor. If necessary, arraignment will be continued to allow for consultation with supervisor. Thus, there will be an avenue for prosecuting these misdemeanors when necessary but it will be appropriately overseen by experienced prosecutors.

Some of the charges she wants to decline are offenses that involve small business owners, property owners, and your sons or daughters – as an example, in the case of possession with intent to deliver drugs. While some of the charges should have discretion on the part of any prosecutor, others are problematical. Discretion is different than blatantly stating those charges should always be dismissed. She once made the statement, “If you want to change the legal system, become a prosecutor.”

GOP members of the Judiciary Committee were not happy with her nomination, which will be set for Senate vote soon. Senators Cotton and Cruz are working to convince their peers not to confirm Rachael Rollins.

And this pro-criminal radical wants to be a U.S. Attorney.

The record of Rachael Rollins, Joe Biden’s radical nominee to be U.S. Attorney for Massachusetts, will take your breath away.

Rollins has been vocal and aggressive AGAINST prosecuting crime. pic.twitter.com/SNdQSxTUPi

Anyone who reads this document knows exactly what kind of radical Rachael Rollins is. pic.twitter.com/f6eVJH3t2f

But Rachael Rollins is attempting to legislate without being a legislator simply by not prosecuting a myriad of offenses. The DAs in Portland, Seattle, and other large cities do the same thing, which is part of her excuse… the “everybody’s doing it” line. They wonder why the crime rate is out of control and always blame law-abiding citizens. They were not elected to change the law. Progressives call it “criminal justice reform.” Senate Majority Leader Schumer will decide when to call for the vote, which could come any day.