It's Not Equity It's Socialism 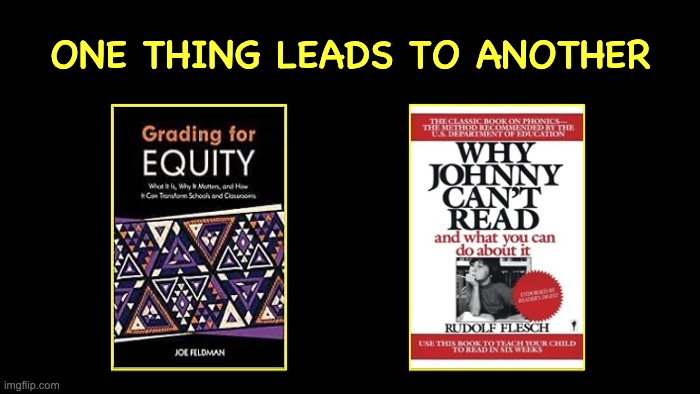 To combat ridiculous failure rates among black and Hispanic students — 77% and 49%, respectively, compared to 27% for Asians and 25% for whites — Oak Park River Forest High School, located in a suburb of Chicago, is restructuring its grading system to promote “equity” through race-based grading.

This is more of a result of educators’ failure than the children whose hard-earned high grades will be rendered almost useless with these race-based grades. This program proves the “educators” creating the program are so woke =that they can’t tell the difference between their butts and elbows.

The gradin program is going to look at skin color and ethnicity and excuse certain behaviors from particular groups to have them advance.

Oak Park and River Forest High School administrators will require teachers next school year to adjust their classroom grading scales to account for the skin color or ethnicity of its students.

School board members discussed the plan called “Transformative Education Professional Development & Grading” at a meeting on May 26, presented by Assistant Superintendent for Student Learning Laurie Fiorenza.

In an effort to equalize test scores among racial groups, OPRF will order its teachers to exclude from their grading assessments variables it says disproportionally hurt the grades of black students. They can no longer be docked for missing class, misbehaving in school or failing to turn in their assignments, according to the plan.
Emphasis added

In other words, these minority children learn that they don’t have to work hard. Everything will be handed to them on a silver platter.

Students who skipped class, didn’t hand in their work, and perhaps mouthed off to teachers or caused classroom disruptions will graduate… and then what? When I was in high school, any of the above would earn me a smack in the face and a long-term grounding,’

What is teaching these students? Will they expect that in college or trade school? What about their future jobs?

Excusing bad behavior based on race means that certain groups are exempt from the universal standards of conduct because they are incapable of meeting the requirement. It’s bloody racist!

The new grading system will be implemented with elective courses in the coming 2022/23 school year and will be used for academic courses the following year.

One of the slides in the presentation outlining the changes and the rationale behind the move states, “[t]raditional grading practices perpetuate inequities and intensify the opportunity gap.”

They’re going to falsely inflate students’ grades… how does that help those students navigate that “opportunity gap” when they get shuttled off to college and can’t handle it because they have been failed by the education system that held them to lower standards? Maybe students of all races should learn proper work ethic in a school that doesn’t require a student loan.

But what does it shift mean for students who work hard to earn their “A”? Well, for one, it ultimately cheapens their achievements.

But the goal isn’t just to bring some students up. It’s also to pull other students down.

Advocates for so-called “equity based” grading practices, which seek to raise the grade point averages of black students and lower scores of higher-achieving Asian, white and Hispanic ones, say new grading criteria are necessary to further school districts’ mission of DEIJ, or “Diversity, Equity, Inclusion and Justice.”

In other words, like most socialist programs. They will shift the successful down and the unsuccessful up. They are creating a school of mediocracy.

Isn’t there some sort of anti-discrimination law that this violates? They’re literally using race to both inflate and reduce grades.

It should be interesting to see if this is challenged like Harvard’s race-based admissions policy that discriminates against Asian and white students.

Two cases about discriminatory “Affirmative Action” admissions will be heard by the Supreme Court in October of this year.

But the DEI advocates are pushing for more discrimination in the name of “equity.”

“By training teachers to remove the non-academic factors from their grading practices and recognize when personal biases manifest, districts can proactively signal a clear commitment toward DEIJ,” said Margaret Sullivan, associate director at the Education Advisory Board, which sells consulting services to colleges and universities.

“Teachers may unintentionally let non-academic factors—like student behavior or whether a student showed up to virtual class—interfere with their final evaluation of students.,” she said. “Traditional student grades include non-academic criteria that do not reflect student learning gains—including participation and on-time homework submission.”
Source: West Cook News(Emphasis added)

The “educators” call it “equitable assessment and grading practices.” Proving once again that Orwell had the right idea about newspeak in his famous book 1984– he just got the year wrong

This is all part of the “diversity, equity, and inclusion” model that is being pushed into more and more schools due to the Critical Race Theory lens that is being taught to teachers and filtering down to interactions with the students and classroom instruction despite parental disapproval.

The last slide in the PowerPoint presentation reads, “Oak Park and River Forest High School will establish a Philosophy of Grading that reflects a rigorous, meaningful, and evidence-based process by which student learning is understood.”

How are they going to do that, exactly? Well, a previous slide explains that teachers will be “utilizing aspects of competency-based grading, eliminating zeros from the grade book, and encouraging and rewarding growth over time.”

If schools were serious about actually helping black students they’d be focused on how to ensure that these students were prepared for the next chapter of their lives rather than just creating a “Get Out Of High School Free” card that helps them dodge scrutiny on how the public education system has consistently failed black students.