Rabbi Eric Yoffie is the head of the reform Judaism, the largest branch of Judaism in America. The Rabbi is also someone who gets regular visits from the Stupid Fairy. Last summer he woke up one day and thought that Chief Rabbi of Israel was an elected position open to non Israelis.Then he decided to reach out to the Muslim community for a “peace, love and granola” session. So he reached out to the Islamic Society of North America (ISNA) an organization deep with terrorist contacts. Most recently he campaigned for Israel to divide Jerusalem, with out even mentioning that the Reform Movement does not have the connection to Jerusalem as the rest of Jewry.
Now Yoffie has decided to trash the evangelical movement in America urging Jews to have nothing to do with Pastor John Hagee, founder of Christians United for Israel. Hagee has said some real stupid things also especially about Catholicism, but that isn’t the reason for Yoffie’s outburst is not Hagee’s comments but because Hagee has endorsed John McCain for President. Yoffie’s goal is to make sure that Barack Obama gets elected: 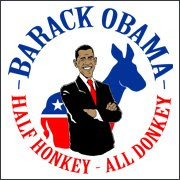 Rabbi Eric Yoffie, President of the Union for Reform Judaism, seems to think Israel has too many allies in America. In particular, he believes that Israel can do without the support of evangelical Christians, and especially Pastor John Hagee, founder of Christians United for Israel.

At a convention of reform rabbis in Cincinnati this week, Yoffie lowered the boom on Hagee and urged Jews to no longer attend Hagee’s series of “Nights for Israel”, which have helped raise tens of millions of dollars for the Jewish state, and strengthened the connection between Jews and Evangelicals around the country.

Yoffie must think that the pro-Israel community has a lot of other places to turn for support in America. Maybe he is foolish enough to think the mainline Protestant churches will take up the slack. The problem is that while Evangelicals come to Washington to lobby Congress on behalf of a strong US Israel relationship, the mainline churches are busy passing resolutions calling for boycotts and divestment from Israel .
take our poll - story continues below
Completing this poll grants you access to The Lid updates free of charge. You may opt out at anytime. You also agree to this site's Privacy Policy and Terms of Use.
Of course the very liberal Reform Judaism movement shares many political belief systems with the mainline churches and their very liberal members. So if Israel is thrown overboard by the Presbyterian Church USA, the United Methodist Church, the Evangelical Lutheran Church in America, The Episcopal Church in the USA, the Quakers, and the United Church of Christ, that is not enough to break any of those bonds of liberal fellowship they share with the Reform movement.
It is not hard to see in this relationship a similarity to the fraternity initiation of new pledges in the movie Animal House, with the Reform movement playing the role of pledges at the Omega House fraternity, and the mainline Churches as the upperclassmen. In one scene in the film, a pledge named Chip, played by Kevin Bacon, is paddled by a sadistic fraternity member named Neidermeyer on initiation night, ,and after each pounding, shouts out: “Thank you, sir, may I have another!” Such are the bonds among liberals, and how easily Israel can be minimized as an issue. Rabbi Yoffie,who has tossed aside the Evangelicals who support Israel, perhaps believes more dialogue is needed between the Reform movement and the Presbyterians and Methodists, and can help heal the wounds: “Thank you for divestment, can we meet again?”
Of course there are plenty of members of Reform synagogues who care little for Israel and have the same blame-Israel mindset as the mainline Protestant Church leaders. Ron Kampeas, who has made a career out of excusing and defending those who are unenthusiastic about Israel, mentions in an article on Yoffie that the Reform leader is in fact more pro-Israel than many of his members, most of whom probably can find dozens of political issues that move them more than the safety and survival of Israel. Some of Yoffie’s members are embarrassed to have to defend Israel in polite company, and others are openly pro-Palestinian, and see no reason for an anachronism like a Jewish state to exist.
But the question arises: why did Yoffie choose to go after Hagee now? After all, Yoffie, a man of not inconsiderable hubris, sought an invitation and then spoke at Jerry Falwell’s Liberty University two years ago, signifying an opening to the evangelical movement. The answer is not too hard to figure out. The Reform movement is in some ways, a political movement masquerading as a 501 C 3 tax exempt religious charity. This is a Presidential election year, and the likely Democrat nominee is Senator Barack Obama. Members of the Reform movement vote, and Jews in general, tend to vote overwhelmingly for Democratic nominees for President. But this year, Obama has run into trouble among the pro-Israel community for his flirtation with Palestinian hardliners in Chicago in his years in Hyde Park, for his 20 year long tie to Pastor Jeremiah Wright, who has given awards to Minister Louis Farrkahan, and blasted Israel regularly at sermons and for a collection of foreign policy advisors, including Zbigniew Brzezinski, Samantha Power, Robert Malley and General Tony McPeak who sound like members of a Jimmy Carter fan club or a Walt/Mearsheimer book club.

Most American Jews do not support the candidate they believe is the most pro-Israel, but the one they think is the most liberal, which for all practical purposes is the Democrat. But for most American Jews, support for Israel is at least a threshold test, low as the bar may be set. And this year., Senator Obama is having trouble clearing that bar, even at the low level at which it is set. It explains why Obama, who has won big majorities among higher income, well-educated professionals in the primaries this year, has lagged badly among Jews with similar education/income characteristics. A poll of Israelis showed Hillary Clinton with 5 times the support of Obama.
A few weeks back, Pastor Hagee endorsed Republican Senator John McCain for President. For years, evangelical Christian supporters of Israel operated outside the framework of mainstream Jewish organizations. But last year, AIPAC, the most important group lobbying for a strong US-Israel relationship, invited Hagee to speak to 6,000 attendees at its annual Policy Conference in DC. Hagee repeatedly brought the crowd its feet with his speech, and the event signified that Hagee and his group, CUFI were now part and parcel of the pro-Israel community.
With Obama as the likely Democratic nominee, and the Reverend Wright controversy still simmering, the Democratic Party and its subsidiaries (which is how the Reform movement behaves) need to change the subject. They have chosen to smear Pastor Hagee as part of that process. The charges are both familiar — that Hagee is anti-Catholic and anti-gay, but also new — that Hagee is damaging the “peace process” by being so hard line. Surprisingly, the New York Times gave Hagee an opportunity to respond to some of the charges that have been hurled at him in this attempt at Democratic Party damage control (“we have one bad pastor, and so do you)”.
The new charge related to the peace process is interesting, in that it ties in with a comment that was made by Senator Obama in Cleveland that being pro-Israel does not have to mean adopting the Likud Party agenda. And that is what Yoffie accuses Hagee of doing — of being uncompromising (like Likud), and hence opposed to peace.

The sad history of the Israeli -Palestinian conflict is that it does not matter whether Israel is compromising or uncompromising; the Palestinian rejection is the same in either case. But Yoffie has now written out of the pro-Israel community anyone who is more skeptical than he of Palestinian intentions, or the wisdom of the current American “engagement” in the peace process.

When one acts as if he thinks of himself as the King of the Jews, as Yoffie appears to do at times, such a stunningly ignorant and arrogant dismissal of the leader of a movement of tens of millions of pro-Israel evangelical Christians, is not hard to do. Hagee has shown the humility to understand his place in all this: he is a pro-Israel Christian American. He understands that Israelis will decide Israeli politics, not his movement, and not Reform Jews. He does not have to like the course Israelis may choose, and he can hope that Israeli politics shift in the direction he prefers in the future. But he is not the one who has written anyone in or out of the pro-Israel community. Rabbi Yoffie is the one who has done that.
Fortunately, his movement, and Yoffie himself, count for less and less each year. Demographic trends favor Orthodox Jews and evangelical Christians, while Reform Jews do not produce children at anything close to replacement levels. There is much for Yoffie to envy.

And maybe this year, If Barack Obama is the nominee, the Democratic Party’s long stranglehold on Jewish voters will end.

Twitter Suspends US Border Chief For Pro-Wall Tweet, But Allows Former PM Of Malaysia To Justifying Muslims Killing The French
October 29th, 2020 Clash Daily
Thanks for sharing!
We invite you to become a Lid insider. Sign up for our free email newsletter, and we'll make sure to keep you in the loop.
Send this to a friend