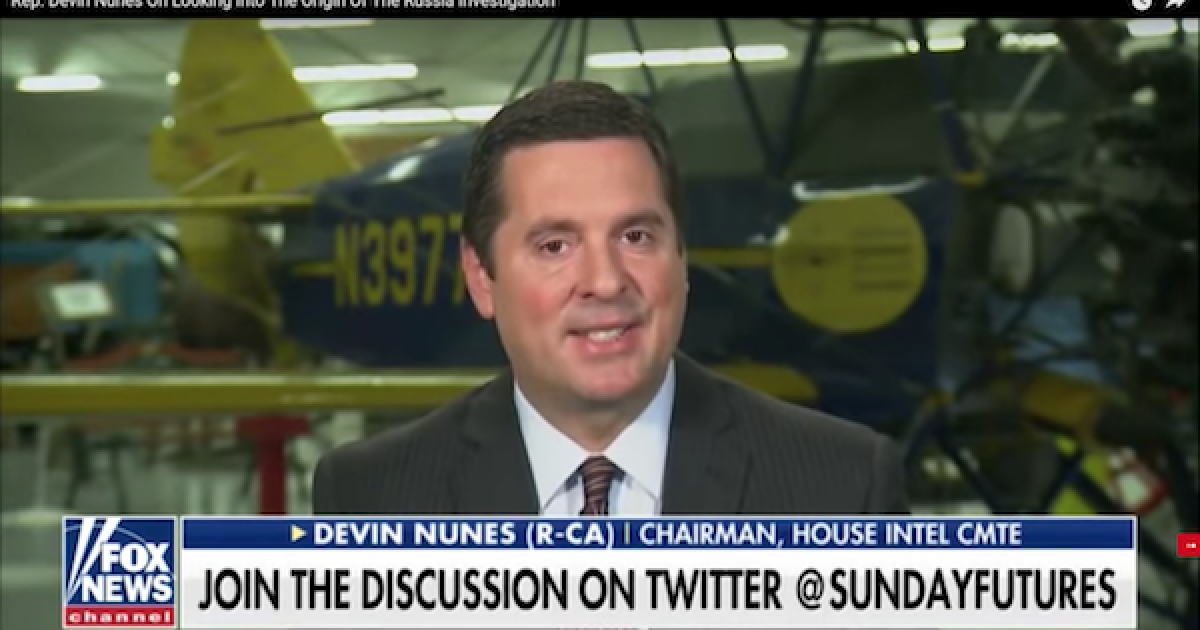 On Sunday, Rep. Devin Nunes (R-CA) revealed something from his review of long-withheld FBI documents: that there was no communications intelligence behind the launch of the “Trump-Russia” investigation in July 2016.

Nunes referred to it as “official intelligence,” and he clearly meant by that “government-collected intelligence.”  His reference to the “Five Eyes” intelligence partnership of the U.S. and the UK Commonwealth clarifies that what he’s talking about is communications intelligence.

Nunes put it this way:

Nunes, R-Calif., cited the Five Eyes agreement as a way of knowing no intel was used. The U.S., along with Canada, the U.K., Australia and New Zealand, make up the “Five Eyes,” or countries that share intelligence in a more-trusted fashion than other arrangements, like NATO, particularly due to years of trust and a common language.

“We are not supposed to spy on each other’s citizens, and it’s worked well,” he said. “And it continues to work well. And we know it’s working well because there was no intelligence that passed through the Five Eyes channels to our government. And that’s why we had to see that original communication.”

What his point means is that the FBI did not begin its probe, or justify getting a FISA warrant on Trump associate Carter Page, based on the communications intelligence we were led to believe John Brennan had received from the UK.

Aside from the Steele dossier and the George Papadopoulos “drunken disclosure” to Australian Alexander Downer, the supposed intel provided to Brennan by the Brits has for months been held out – in vague terms, through the media and through implications from (mainly) Rep. Adam Schiff (D-FL) – as the “official” intelligence behind the FBI investigation.

Now Nunes has clarified that no such intelligence was used to justify the FBI investigation.  That doesn’t mean the Brits passed nothing to Brennan.  It does suggest that, whatever may have been passed, the long-reported skepticism about it from other U.S. intel agencies prevented it from being used by the FBI.

It may take a little time for the truth about this to sink in.  In light of everything else we have been told about this matter, it means something more than that there was no underlying basis for having suspicions about Trump “ties” to Russia.

It means that the entire government enterprise of probing the Trump campaign, through a FISA warrant on Carter Page, not only was a political targeting operation against the Republican candidate but had to be one.  It could not have been a good-faith effort to investigate something we had reason to believe was really there.

I have long expressed concern, and even suspicions, about the conduct of the Obama “Russia-Trump” task force, set up in August 2016.  But because of the outside chance that the Brits passed something legitimate on to Brennan in the summer of 2016, I’ve been reserving judgment on what was really going on.

With Nunes finally having reviewed the electronic documents his committee has had under subpoena for months, we can now render judgment.  Whether anything was passed to Brennan or not, the FBI didn’t use any Five Eyes intelligence, or apparently, any government-gathered intelligence (other than possibly the tip from Downer on Papadopoulos, which may or may not have been vetted “intelligence”), to start its investigation.

The Downer tip has only the most tenuous qualification as government-collected, at least until we know more about it.  In any case, it’s not really “intelligence” at this point, in the sense of being a good lead that needs corroboration.  Papadopoulos – the subject of it – has copped to everything in the story (other than any insinuation of “collusion” with Russia).

But Nunes is right to continue probing how the Downer tip got to the FBI (see his Sunday interview, link above).  If it wasn’t by the normal methods for vetting and qualifying intelligence, then using it as the basis for an investigation of American citizens (or for drawing conclusions about national security needs, for that matter) is highly problematic.

But that’s a collateral point.  The real, big, and glaring point is a larger one.  Keep in mind what I have highlighted before: that the FISA warrants on Paul Manafort, which were in effect at times in 2016 when Manafort was in communications with Trump and his campaign aides, enabled the FBI to keep the Trump campaign organization, including Trump himself, under surveillance throughout the entire year.

The authority to retrieve NSA data on the same target set (the members of the Trump campaign) went back before 2016, and the FBI presumably used it to the fullest.  (This means Trump was correct in his often-derided tweet about having been “wiretapped” by Obama.  But that, too, is a collateral point.)

Moreover, we know that the unmasking of U.S. persons – reportedly including people in the Trump campaign – was authorized in suspicious and unusual ways by (at least, that we know of) Susan Rice, Samantha Power, and John Brennan.  Such unmaskings were done using their credentials, at any rate.

Between these two complementary enterprises, the “investigation” of Trump and his “ties” to Russia was already being done.  It wasn’t formally about Trump, but it was compiling vast amounts of information about him.

The FBI would have used it, that is if the purpose of the surveillance was to determine whether Trump really had ties to suspicious Russians or Russian activity.

But clearly, it wasn’t.  That’s what we can be certain of at this point.  The last potential alibi for a formal investigative process – the “British intelligence” – has been knocked down.

We’re left with nothing but things Hillary Clinton did – commission the Steele dossier, feed it to government agencies; things the Obama administration did – run a government intelligence operation against Trump, including felonious leaks of classified information, which at no time turned up anything about Trump; things the Russians did – provide kompromat for the Steele dossier, bait George Papadopoulos, Donald Trump, Jr., and Carter Page, (probably) hack the DNC computer system and John Podesta’s email account; and things the media did – collude with all these groups to promote a narrative that there was something nefarious to know about Trump and some of his most-targeted associates, even though the government participants involved, and some of the media participants – like Fusion GPS, which was consciously retailing a made-up narrative – knew there wasn’t.

Once more, the Brennan mission to Moscow

In light of this, the timing of John Brennan’s March 2016 visit to the Russian FSB in Moscow, which I wrote about over the weekend, is starkly informative and profoundly sad.

In early March, Fusion GPS offered its services to the Clinton campaign and the Democrats.  At that time, America didn’t yet know who the GOP presidential candidate would be.  This gives us reason to wonder if something like the Steele dossier would have been compiled on any Republican who won the nomination, whether Ted Cruz, Marco Rubio, or Jeb Bush.

We also have to wonder if all of the front-running GOP candidates were under communications surveillance by the Obama administration.  We can be certain Trump was, since at that time he was already an associate of Paul Manafort, and very probably had been in communication with him, or someone else who was in communication with him (Manafort), between the time Trump announced his candidacy in 2015, and early March 2016.

On or about 14 March, John Brennan went to Moscow for a consultation with the FSB.  Afterward, the Russians offered bait to three people connected with the Trump campaign.  (Papadopoulos in March and April, Trump, Jr. in June, and Carter Page in July.)  The campaign never took the bait.

After Fusion GPS was hired in April 2016, and in turn hired Christopher Steele, the Russians supplied their kompromat to Steele between June and November of 2016.  They apparently supplied similar, seemingly “corroborating” information to Cody Shearer and/or Sidney Blumenthal, who shopped it to the State Department separately from the Steele dossier.

The Russians also phished John Podesta’s email account five days after the Brennan meeting in Moscow, and between then and the end of April hacked into the DNC system.

All this time, the FBI had an extensive history of the actual communications of Trump and his associates, at least up to the date on which the Paul Manafort FISA warrant expired (probably between 28 March and 9 June 2016; see my link on the Brennan visit to Moscow).  When a new warrant was obtained on Manafort, after the November election, the FBI was able to fill in any gaps.

Around the time the original Manafort warrant expired, the crackdown Admiral Rogers initiated on backdoor use of NSA data – a crackdown that apparently became rigorous around 18 April 2016 – probably increased the Obama administration’s urgency about having a live FISA warrant to justify retrieving surveillance data through the front door.

ut the Rice, Power, and Brennan unmaskings could have made up for some of that deficit.  Their staffers were just doing it through the “back door”; doing it with a more limited data store at NSA, and doing it as the wrong government agency for the task and without a warrant.

With the Clinton-commissioned Steele dossier in hand, the FBI on 31 July launched an investigation that never seemed to involve any actual investigative activities, such as interviewing subjects.

Within the next week, Obama convened his “Russia-Trump” task force, an unsatisfactory and nebulous enterprise whose only two official products eventually were (a) the intelligence assessment that Russia likes interfering in U.S. elections, and tried to hack into some state voter registration databases in 2016; and (b) the formal addition of states’ voting systems to the DHS definition of “critical infrastructure.”  The latter would, in theory, facilitate extensive federal intervention in the fielding and operation of U.S. voting systems – which are by constitutional mandate the province of the states.

Notably, these two products of the Russia-Trump task force were made public in January 2017, just weeks before Obama left office.  They could not affect the 2016 election; they could only affect the public perception of its legitimacy.

At the same time, the fruits of collusion in the Steele dossier, surveillance of the Trump campaign, and the manufactured narrative about Trump and Russia began manifesting themselves in earnest.  The Steele dossier was published by BuzzFeed on 10 January 2017, and within hours, the first report that Michael Flynn had talked to the Russian ambassador on the phone – a report sourced from classified intelligence, and presented for that reason as if it were somehow nefarious – was published in the Washington Post.

The more the layers are peeled back on this, the less it looks like an investigation of Trump or his campaign.  We can pretty much conclude at this point that it was not an actual “investigation,” as we would straightforwardly understand that term.  It was not prompted by anything that merely came to the attention of the Obama authorities.

Rather, it involved allegations and incidents that had to be manufactured by a set-up, every step of the way.  It looks instead like an operation mounted against the incoming president – apparently, because he was a Republican, and was deemed likely (perhaps especially likely) to make significant changes to national policy.

The real question now is what we will do about that.  Do we turn away in exhaustion and move on?  Or do we pursue this to the end of the line until we get answers, on important questions like how surveillance was being misused against U.S. citizens, and what enabled that to happen?

It’s up to us.  I know I’m tired.  But are we too tired to recognize historic outrages against civil rights, the rule of law, and constitutional processes when we see them?

If we are, it won’t be Hillary, the Obama administration, or the Russians who brought us down.  It will be us.