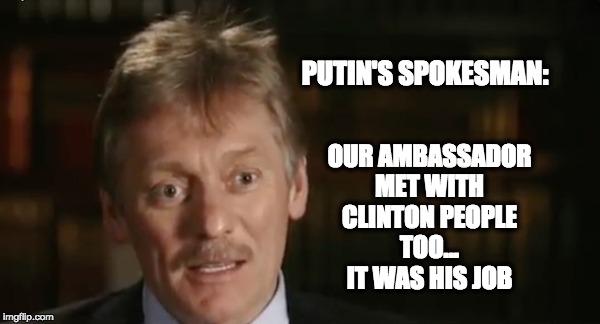 Vladimir Putin’s spokesman Dmitry Peskov, was on the Fareed Zakaria show Sunday morning and added some important facts to the Democratic Party accusations that Trump’s team was in bed with Russia including that their ambassador also met with Team Clinton,  why the Russian Ambassador met with Trump’s and Clinton’s people, and what was discussed between the Ambassador and each of the candidates representatives.

The interview began with Peskov saying that Russia did not have any collaboration with Team Trump and that they believe that by saying Russia interfered with the election process the U.S. is humiliating itself.

Zakaria:  Let me ask you very directly, did the Russian government have any collaboration or serious communication back and forth with Donald Trump’s campaign during the election campaign last year?

Peskov: The answer is very simple. No. The fact that Russia is being demonized in that sense comes very strange to us. We are really sorry about that. The whole situation takes us away from the perspective of getting our relationship to a better condition. We quite unexpectedly we were faced a situation when Russia, all of a sudden became a nightmare for the United States. We cannot sincerely understand why American people and American politicians started the process of self-humiliation. You’re self-humiliating yourself saying a country can intervene in your election process.

Peskov explained that the Russian Ambassador met with representatives of both major candidates….because it’s his job:

Zakaria: So what was it that the Russian ambassador was talking to so many of Donald Trump’s associates about?

Zakaria: Did he have similar meetings with Clinton campaign officials because I don’t know of any?

Peskov: Well, if you look at some people connected with Hillary Clinton during her campaign, you would probably see that he had lots of meetings of that kind. There were no meetings about electoral process. No way it should be perceived as interference. If you look at it with intention, you would probably say he was trying to interfere in Hillary’s activities. It would be nonsense because it’s not true.

Zakaria pressed Peskov to admit that Putin did not like Hillary Clinton. Peskov said sure he preferred Trump (because of all the nasty things Clinton said about Russia) but that doesn’t mean Putin interfered with the election :

Zakaria Isn’t it fair to say that Mr. Putin did not warm to Hillary Clinton and he accused her of meddling in Russia’s internal affairs during the 2011-2012 campaign for his own presidency. It does seem as though he might have had a preference for Mr. Trump because in his view Hillary Clinton tried to interfere in Russian politics.

Peskov You would probably recall that president Putin during election campaign never answered direct question about his candidate of his support. He kept saying that we will respect the choice of American people and only American people can and should choose their own president. These were the words of president Putin that he had repeated numerous times during this last couple of years. Of course, if you ask him whether he mentioned the then candidate Donald Trump, I will answer yes, he had. Why? The candidate Hillary Clinton was quite negative about our country and her attitude declaring Russia  nearly the main evil in the world and the main threat for the United States. To the contrary, the other candidate, Donald Trump was saying that yes, we disagree with the Russians in lots of issues but we have to talk to the in order to try to find some understanding. Whom do you like better? The one that says that Russia is evil or the one who says we disagree but let’s talk, to understand and to try to find some points of agreement. Of course, public opinion will likely be the other one. It’s quite natural. It’s quite natural. But it doesn’t mean in no way that Russia has interfered in the electoral process.

Zakaria reminded the Putin SPOX that 16 different US intelligence agencies said that Russia tried to skew the election results:

Zakaria: What do you make of the fact that every intelligence agency in the United States, you know they rarely agree on anything, but all 16 say they have high confidence that Russia tried to alter the outcome of the elections in the United States?

Peskov:  We don’t know what’s the reason for these words. We have never seen any evidence. And we’ve never heard something trustful. What we have seen and open in public part of a report by one of the agencies, the special agencies of the United States and I would humbly say that it’s not a paper of a high quality in terms of being really trustful.

It’s hard to believe the spokesman for the Russian President over the intelligence agencies of the U.S. Let’s face it Peskov isn’t going to come out and say, sure we tried to influence the election. On the other hand even if Russia tried to skew attitudes about Hillary–Putin wasn’t the one to tell Mrs. Clinton to take the rust belt for granted, and spend her time elsewhere.

The big, and the most believable news out of this interview was that the Russian Ambassador to the U.S. met with the Clinton people, he treated both campaigns equally. Only idiots would meet with only one side–especially when the other side is predicted to win the election. There are a lot of bad things one can say about Putin and the Russian government…but stupid isn’t one of them.

The video of the interview is below: