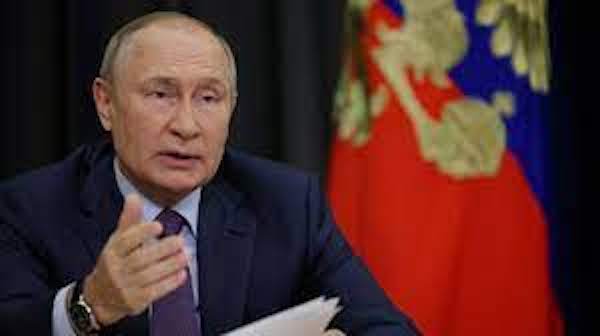 As Vladimir Putin’s army continues to find itself thoroughly outmatched (and outclassed) by Ukraine’s forces, the Russian dictator is searching for a Hail Mary play that can keep him from any further humiliation.

His decision:  Annex 4 regions of Ukraine illegally, much like he did back in 2014 with Crimea.

“The people made their choice,” said Putin in a signing ceremony at the Kremlin’s St. George hall. “And that choice won’t be betrayed” by Russia, he said.

The Russian leader called on Ukraine to end hostilities and hold negotiations with Moscow — but insisted that the status of the annexed territories was not up for discussion.

Putin used some desperate language in the announcement.

“I want the authorities in Kyiv and their real overlords in the West to hear me: The residents of Donetsk, Luhansk, Zaporizhzhia and Kherson are becoming our citizens,” Putin said. “Forever.”

Global leaders were simultaneously furious and dismissive of the move, with many suggesting that they shall refuse to accept the territorial malpractice.

“The United States condemns Russia’s fraudulent attempt today to annex sovereign Ukrainian territory. Russia is violating international law, trampling on the United Nations Charter, and showing its contempt for peaceful nations everywhere,” President Biden said in a statement Friday morning, as his administration announced fresh sanctions on Russia for its annexation of the Ukrainian regions.

Then came more sanctions and a terse declaration from the State Department.

“We will hold to account any individual, entity or country that provides political or economic support for Russia’s illegal attempts to change the status of Ukrainian territory,” Secretary of State Antony Blinken said in a statement.

Some experts fear that Putin will use any Ukrainian liberation attempts in these territories as a pretext for the use of nuclear weapons, as it would allow Moscow to falsely suggest that they were being “invaded.”