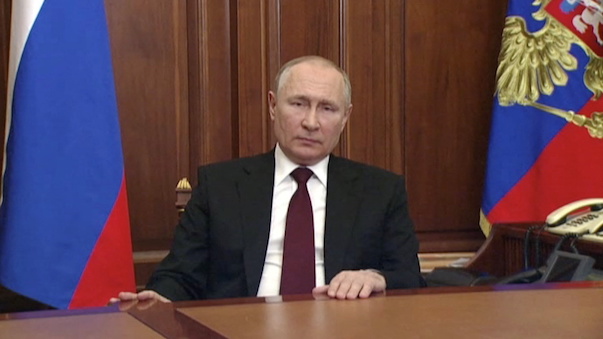 One day after the Beijing Olympics finally ended, in a whirlwind speech full of Soviet-style propaganda and revisionist history, Russian President Vladimir Putin chose war against the international order of the last three decades.

His speech featured a litany of post–Cold War grievances, namely a lack of NATO expansion.

“They try to convince us over and over again that NATO is a peace-loving and purely defensive alliance, saying that there are no threats to Russia,” Putin argued. “Again, they propose that we take them at their word. But we know the real value of such words.”

As to his western neighbor, Putin said Ukraine “never had a tradition of genuine statehood” and only existed due to the USSR.

(Actually, western Ukraine goes back centuries to the Austro-Hungarian Empire. And even if not, nations regularly emerge from the kind of historic events Putin described.)

Putin also ominously referred to Ukrainians fomenting violence against Russia’s allies in Ukraine, saying that those involved, including journalists, would be brought to justice.

“I want to say clearly and directly that in the current situation, when our proposals for an equal dialogue on fundamental issues have actually remained unanswered by the United States and NATO when the level of threats to our country is increasing significantly, Russia has every right to take retaliatory measures to ensure its own security,” he rambled. “That is exactly what we will do.”

Reports about his bizarre Monday afternoon phone call with Emmanuel Macron suggest the French president was subjected to similar ranting and could not convince Putin to consider diplomatic talks on Europe’s long-term security arrangements.

And so here we are.

This is a backtrack from Biden’s 1/20 statement that any violation of Ukraine’s recognized borders constitutes invasion. Worse, it’s a hideous cave to the Russian view that changing the facts on the ground by force is legitimate. Very bad line the WH needs to correct asap. https://t.co/iZt4sv7uou

Before the “forever war” cabal took over Monday night’s Fox News programming, the network’s excellent national security correspondent Jennifer Griffin explained, “Tonight we are witnessing the beginning of the end of the post-Cold War architecture, which ensured a rules-based order, stability, and respect for the sovereignty of nations. The world must now brace itself for what follows.”

President Biden’s timid sanctions tonight are wholly unequal to this moment. Russia is invading Ukraine now. The time has come for the “swift and severe” sanctions that Joe Biden has long threatened but refused to impose. There is not a minute to lose.

This, of course, does not mean Tucker Carlson’s son — or any American — is unwillingly going to fight in Ukraine, or we cannot simultaneously focus on the southern border, crime and inflation; it does mean a Russian invasion could be kind of the war the west has not seen the past 80 years, though once was common.

Powerful nations have long sought to exert regional dominance by taking over neighbors. And harkening back to the Afghanistan withdrawal debacle, combined with the recrudescence of an isolationist movement here, Putin believes the U.S. and our allies are weak.

As to what’s next, by the time you read this, we may know, but if not, few are better than Robert Kagan to opine.

And I’ll do my best to make sense of the madness on The Ed Morrissey Show Tuesday afternoon as well.