I Can’t Believe I’m Going To Say This Buy Where Is PETA When You Need Them? 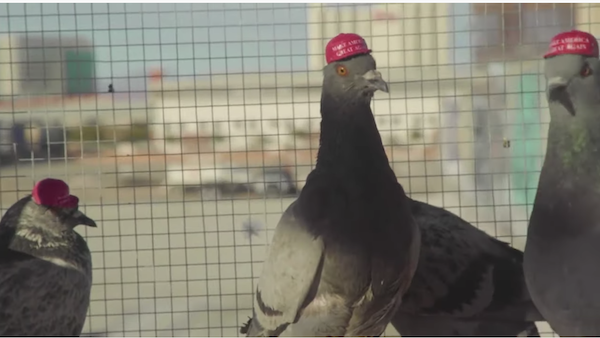 Sometimes, the truth truly is stranger than fiction. Especially when PUTIN is involved. Not the Russian despot, but a group called Pigeons, United To Interfere Now. PUTIN Releases Pigeons

With the Nevada Caucuses just a few days away, and a primetime Democratic debate slated for Wednesday night, all eyes are on the Silver State and Sin City this week.

In Nevada, it is widely believed that Bernie Sanders will walk away with a resounding victory, serving to further cement his status as the Democratic frontrunner.  Michael Bloomberg, billionaire former mayor of The Big Apple, is looking to play the spoiler having only qualified for the Nevada debate after hiring a former top aide to Hillary Clinton.

Amid all of the political partying that’s going down in Vegas, a strange protest has sprung up as well, with a group called PUTIN releasing several decorated pigeons just in time for the eyes of the nation to turn on Nevada.

The very strange “aerial protest piece” was reportedly the work of an organization calling themselves ‘Pigeons, United To Interfere Now’ or PUTIN. The group sent a rather well-produced presentation of the cap-wearing creatures being released by members of the organization.

Speaking to the Las Vegas Review-Journal under the condition of anonymity, the group leader explained that they were protesting Wednesday night’s Democratic debate being held in the city and that the proverbial MAGA pigeons were “coordinated to serve as a gesture of support and loyalty to President Trump.” To that end, alongside the dozen or so birds wearing the now-iconic red caps, there was also one pigeon who sported a wig resembling the president’s trademark hairstyle.

And, because you simply have to see it to believe it:

The symbolism behind “PUTIN” releasing dirty, MAGA-clad birds to defecate on the heads of voters ahead of 2020 is sophomoric at best, and offensively childish at worst–what a bunch of bird brains!