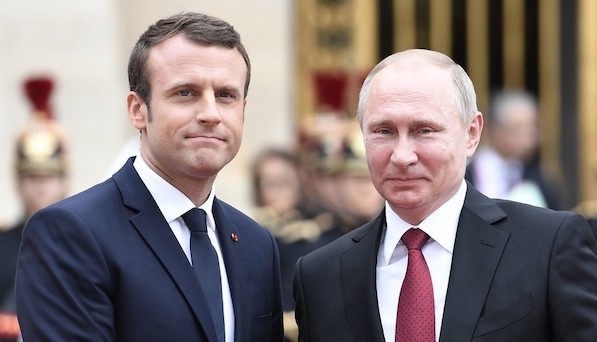 Vladimir Putin may think he’s subtle, but he is not.

The former KGB agent has been performing this quirky impression of a C-grade Bond villain for decades now, almost winking and nodding his way through predictably tyrannical solutions to uniquely Russian problems for as long as he’s been able to sniff the seat of power.

For instance, it was no secret that he would invade Ukraine, and he barely tried to hide it, only scoffing at those who dared to point out the massive troop buildups on the border and the leaked transmissions among his military leaders that pointed to a coming war.

And now another leaked conversation seems to show that French President Emmanuel Macron wasn’t falling for any of Putin’s excuses in those pre-invasion moments either.

Just four days before Moscow’s forces attacked Ukraine, Vladimir Putin and Emmanuel Macron had a furious argument over the phone, with the Russian strongman claiming that Ukraine’s Volodymyr Zelensky was lying to the French president, according to a bombshell leak.

Details of the confidential exchange between the two world leaders on Feb. 20 were revealed in a new documentary about Macron’s handling of the ongoing conflict, titled “A President, Europe and War,” which premiered last week on channel France 2.

The phone call between the two leaders was heated.

As Russia was in the process of massing its forces in preparation for the full-scale invasion in late February, Macron called his Russian counterpart to offer his views on the escalating situation and discuss “useful actions” to defuse it.

Putin quickly turned the conversation to “our dear colleague Mr. Zelensky,” accusing the Ukrainian president of “lying” to Macron about his intention to implement the Minsk Accords, which had sought to end the war in the Donbas region.

Putin then took issue with Zelensky’s apparent refusal to negotiate with pro-Kremlin Ukrainian separatists, which infuriated the French president and prompted him to exclaim in audible frustration: “I don’t know where your lawyer learned law!”

Macron questioned the qualifications of Putin’s lawyers during a tense exchange over Russia’s proposal that Ukraine negotiate with pro-Kremlin separatists.

He then added: “I don’t know what lawyer will be able to tell you that in a sovereign country, the texts of laws are proposed by separatist groups and not by the democratically elected authorities.”

Putin fired back at his French counterpart, arguing that Zelensky’s government was not democratically elected.

“They came to power in a bloody coup, with murders and arsons and people being burned alive,” Putin told Macron.

Zelensky, a former comedian, and actor, was elected in a landslide victory in 2019 by drawing more than 73 percent of the votes.

As the verbal spat became more heated, Macron told Putin he doesn’t “give a damn about the separatists’ proposals” because they fall outside the law.

After some more bickering, France’s leader tried to get the conversation back on the diplomatic track and proposed a meeting among all the parties in the conflict. He also promised Putin to call Zelensky to “calm everyone down,” but he urged the Russian leader to turn down the temperature on the Ukraine border.

“There was a lot of shelling yesterday,” Macron pointed out. “If we want to give dialogue a chance, we have to calm things down in the region.”

Putin said his forces will wrap up their military exercises that night, but warned that Russia “will definitely leave a military presence on the border until the situation in Donbas calms down.

Near the end of the call, Macron suggested they issue a joint press release about Putin stopping the shelling. Putin avoided answering Macron by saying he was at the gym and about to play hockey and would talk to his advisers afterward.

A day later, Macron got his answer as Russia recognized the two breakaway “republics” were independent states.

Putin has offered a bevy of strange justifications for his invasion of Ukraine, none of which have been deemed legitimate by the international community. An explanation of why Putin’s claim of de-Nazification of Ukraine is false and hypocritical can also be found here.