Thousands Of Migrants Push Past Mexican Police As They Head Toward U.S. Border (Videos) 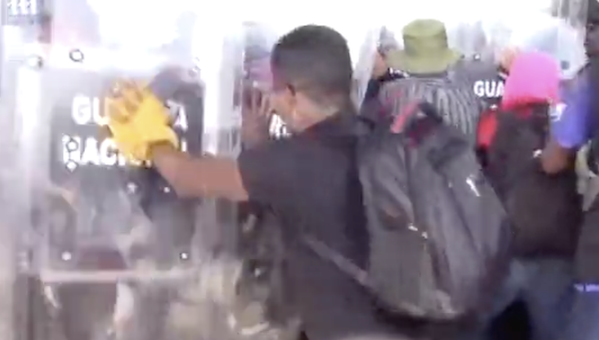 Biden’s Broken Border continues to be flooded with illegal migrants who are taking cues from the administration. push past Mexican police

The Biden-Harris administration’s “humane” immigration policy has turned out to be an open invitation to the world to show up at the southern border and bypass the proper channels for immigration.

On Wednesday, the Washington Post reported 1.7 million apprehensions for the 2021 fiscal year that ended in September. That is the highest number ever recorded, and thousands more are coming.

Hundreds of thousands of migrants are heading to the United States, and they’re organized and refuse to allow anything to get in their way…

Thanks, Biden! DHS Preps For MASSIVE Surge Of Up To 400,000 Illegals In October…not even the Mexican police.

A large caravan of around 3,000 migrants pushed past Mexican police near the Guatemalan border.

A caravan with thousands of migrants is making its way from Tapachula, Mexico, to the US border, and Mexican officers struggled and ultimately failed to stop them on Saturday.

Families from Haiti, South America, and Central America pushed past and tossed apart police with anti-riot gear and shields who had been moved in anticipation to break up the hordes of people.

The crowd carried American flags and banners supporting president Biden with messages such as ‘Biden For All,’ FOX News reported.

Here is the video of the migrants pushing past police in Tapachula, Mexico, near the Guatemala border.

Here is the Fox News report with Bill Melugin, who is at the southern border:

The migrants are determined to enter the U.S. illegally and are going to “peacefully resist” if they are confronted.

The Biden-Harris administration’s handling of the border crisis has been to stick their fingers in their ears and ignore the criticism because they quite clearly don’t really believe it’s a crisis. For years, the Democratic Party has pushed for open borders without calling it that, and now they’re getting exactly what they want.

Despite the equivalent of the entire population of West Virginia intercepted by border patrol in one fiscal year, the top two members of the administration haven’t even bothered to go near the border.

During Biden’s catastrophically bad CNN town hall, Joe told Anderson Cooper that he’d been to the border before and he should probably go again…but that’s not true.

CNN’s Anderson Cooper: “Do you have plans to visit the southern border?”

Joe Biden: “I’ve been there before.”

REALITY: According to Fox News, there is NO EVIDENCE Biden has EVER been to the border as president, VP, Senator, or as a concerned citizen.
pic.twitter.com/i0RfyBKAzj

Biden even got fact-checked on his claim that he’d been to the border by CNN.

CNN fact-checker Daniel Dale pushed back against this claim, stating that he “could not find any evidence that President Biden had ever visited the border at any point in his political career.” He then offered that White House press secretary Jen Psaki clarified Biden’s statement in a press conference Friday. Psaki claimed Biden was referring to a campaign stop he made in 2008 in El Paso, Texas, when his motorcade reportedly passed by the border for only minutes.

As for the “not having a helluva lot of time” to go to the border, he wouldn’t even stop his vacation when Afghanistan fell into the hands of the Taliban.

Biden says the administration needs to make sure that people are really seeking refugee status? Oh, really? Did they do that with the Cubans who were trying to escape over the summer? Why, no. They didn’t.

CUBANS TURNED AWAY: Biden Makes Mockery Of Refugee System… Just Like Obama Did

But at least 160,000 “refugees” — some of whom were Haitians who had been living for years in Latin America — were released into the interior of the country and given work permits.

And Biden’s claim that we’re no longer seeing children piled up with space blankets looking like baked potatoes, the administration “solved” that problem by losing track of at least 45,000 children.

This administration doesn’t give a damn about the border crisis, and they’ve made that perfectly clear.

The Biden-Harris “humane” border policies are just putting more and more desperate people at risk of death from a perilous journey and into the hands of human traffickers who use rape as payment, abandon children, pack them in vehicles like cordwood, and just don’t give a damn about them. How is that “humane”? Everyone except the Biden-Harris administration knows that it isn’t humane at all.