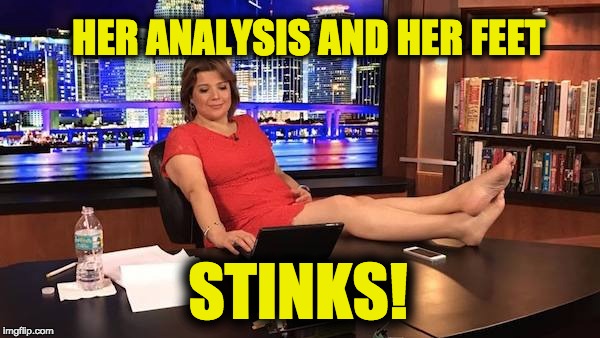 This is what CNN calls political commentary. While appearing on Monday morning’s edition of CNN Newsroom, political commentator Ana Navarro added to the divisiveness in America by declaring that President Donald Trump is a “nincompoop” who is “unfit to be a human,” I am surprised she didn’t say “up his nose with a rubber hose.”

“He was a coward,” she added. “He didn’t have the spine to behave as the leader of the United States and I feel that to be shameful. I’m glad Republicans are calling him out on it. I’m glad elected leaders in the Republican Party are finally, finally stopping looking the other way and confronting the fact that he’s not only not fit to be president. In my book, his lack of empathy, his lack of leadership, his lack of courage, he’s unfit to be human.”

Coward? Gee those are strong words for a woman who sits in a TV studio and calls other people childish names.

You disagree with Trump that’s fine, tell people why like an adult.  But also recognize that he gave up a career on easy street and put himself on the front lines to make the tough decisions because he honestly believes he is doing the best thing for ALL Americans. A coward doesn’t stand up to lead while getting with liberal criticism such as Ms.Navarro’s.

Navarro went on to say that “nothing” Trump says is sufficient in her mind, despite the fact that he’s already spoken against the violence in Charlottesville twice.

“It’s been three days since the march. It’s been two days since Heather Heyer died — was murdered by a white supremacist. It’s been days since all sorts of spiritual government elect Republicans, Americans have been asking him and calling on him to say something and have the spine to call out white supremacy…Look, he had an opportunity. He’s had two days. He’s had more than two days to address this and he has failed to do so. To do so now under duress because of public perception, because of public pressure. thank you, buddy. I really don’t need it,” she added.

Hey  Ana, he also didn’t specifically mention the liberal hate group in Charlottesville, ANTIFA, oh but wait you didn’t mention them either.

But she wasn’t finished, and went on to call Trump a “nincompoop.”

Perhaps it’s up to the supposed political analysts who from the moment this president was nominated by his party has been unfairly crapping all over the Commander-in-Chief and dividing the country.  Perhaps if people like Ana Navarro, criticized the president fairly, without the hyperbolic or childish language the country wouldn’t be as divided.

“It’s easy to go out there and throw bombs. It’s easy to say the President is nincompoop or not a human as Ana just said. But when you are the President and see violence like this, we know what many times happens at night afterward,” he said.

“There are people that are angry on both sides. They go back out, there are riots, people die, policemen die. We’ve seen it in different venues around the country the last several years and I think he had a responsibility to tell people we are bigger than this, that we love one and, as a country, we need to come together. And that was one of the tweets that he did send out that no one gives him credit for,” he added.

Note: I realize the meme at the top of this post is as childish as Ms. Navarro’s analysis–I wanted to post something she would understand.