Why Most Published Presidential Election Polls Are Meaningless (Especially This Early) 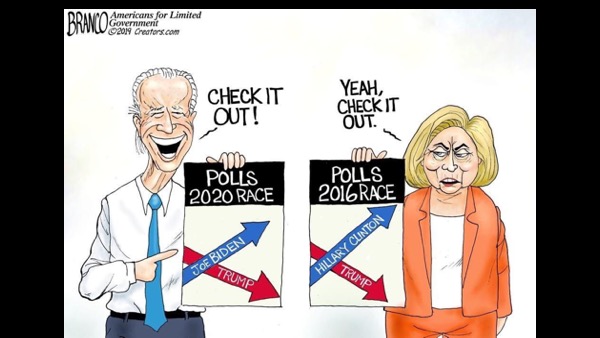 In 2012 Republicans read the presidential polls wrong. They said that the polling organizations’ definition of likely voters was weighted too heavily toward the Democrats. They believed their internal polls were weighted more correctly.  Despite the way the published polls looked, Mittens Romney woke up on election day thinking he would be the next POTUS—but the internal polls were wrong.

In 2016 both sides got it wrong. The polls said that Hillary would win–nationally. And thanks to N.Y., CA, and Ill, she did win the popular vote. But people who looked at trends in the critical battleground states saw the electoral college was trending toward a Trump victory.

Now for 2020, the early published polls are claiming that President Trump is WAY behind. And once again, people are rushing to accept the polling data. Dems are ecstatic, and some Republicans are depressed.

Writing in an op-ed for Fox News, Schoen lays out how candidates backed by Trump claimed victory in GOP primaries, having “unquestionably benefited significantly from the president’s support.” Especially the recent Tommy Tuberville win over Jeff Sessions. Sessions had many GOP endorsements,

President Trump endorsed Tuberville over Sessions, who was Alabama’s Senator until he left the position to become Trump’s A.G.

The President never forgave Sessions for refusing himself from the Russia investigation, which led to his deputy leading the Russiagate investigation and appointing a special prosecutor. That decision put the President, his administration, and America through two years of Russiagate.

“Meanwhile, in Texas former White House physician Dr. Ronny Jackson, who was endorsed by Trump, won his primary for a U.S. House seat, beating out Josh Winegarner, Winegarner was endorsed by the outgoing Republican Rep. Mac Thornberry, who did not seek reelection.”

Delving deeper into the weeds, Schoen explained how these primaries could bode well for his chance of reelection.

“In many ways, the weight of Trump’s endorsements in Alabama and Texas signals that the president’s current chances for reelection may be stronger than national polls indicate,”

Along with the endorsement power of President Trump, Schoen also pointed out the divide in the Democratic Party. The gap between the party elite and the left-wing extremists (Schoen calls them progressives)  In Democratic Party primaries held in June, “progressive challengers either defeated or came close to nearly defeating their well-funded establishment opponents.”

For example, Rep. Eliot Engel D-NY, the powerful chairman of the House who had been in the House since 1989, lost to leftist Jamaal Bowman.

Schoen explains that the division between the progressive and moderate factions of the party was also manifest in the July 14th primaries.

The Democrat pollster warned in June that polls were overstating Joe Biden’s standing when it comes to the 2020 election.

“Aspects of public polling that exaggerate Biden’s lead combined with the challenges that both he and Trump currently face will make the result of the election much closer than it currently appears it will be,” wrote Schoen.

Here are some truths about polls that you can take to the bank.

Before you rely on polls and predictions, understand that President Trump has only been campaigning for real during the past week. During that time, he’s made two major speeches from the White House talking about his accomplishments since he took over.  Recent Rasmussen poll numbers reflected Trump’s campaigning, showing Biden’s lead shrinking from 10% to 3% in the past week.

Keep in mind these are national numbers. The U.S. does not have a national election. When the Electoral College is factored in, we have fifty state-wide elections. In 2016 predictions of Clinton’s victory were based on the national numbers. To really see who is ahead or behind, one has to dive into the state numbers.

But it’s still very early. There are still 109 days till election day. Generally, elections tighten up after both parties have their conventions. While this year’s conventions will be mostly virtual, for most Americans, the conventions have always been a virtual event. Watching on T.V. or during recent years streaming on the internet.

While many pundits say he won’t, Biden says he will show up for the debates.  Trump is a better debater than Biden, so if he does debate, most probably the President will come out of them with wins. However, if he doesn’t debate, Biden will be hurt for his lack of self-confidence and breaking his word.

Remember the mistakes of 2012 and 2016. Polls are a reflection of how people feel on a specific date. But during a presidential election year, opinions change, and quickly. Especially when looking at the state numbers.

Keep coming back to this site for continued reporting and analysis of the trends for the presidential election and control of the Senate and House.