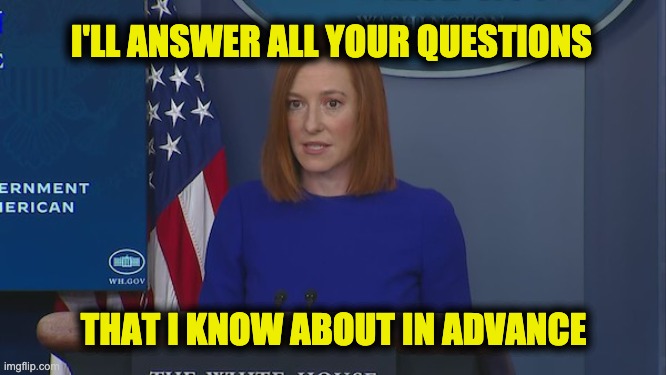 This is an example of the press digging its own grave. After four years of attacking a President who made himself available for spontaneous questions every time he left the White House, they have a President who hides from the press and a press office that wants reporters to pre-submit their questions. The Daily Beast reports that reporters are complaining about the White House press office wanting to know in advance what questions they will ask at briefings. These aren’t the questions being asked of dementia Joe Biden, he’s hiding from the press. They’re complaining about Jen Psaki’s briefings. Psaki press briefings

According to three sources with knowledge of the matter, as well as written communications reviewed by The Daily Beast, the new president’s communications staff have already on occasion probed reporters to see what questions they plan on asking new White House Press Secretary Jen Psaki when called upon during briefings.

Why not? That will enable Psaki to pick the reporters with the better (for Biden) questions and develop a spin for the others. A spin that may not have any relationship with the truth.  As the MSM have decided they will not fact-check the re-Bama administration, Psaki knows she can say anything she wants and get away with it.

The requests prompted concerns among the White House press corps, whose members, like many reporters, are sensitive to the perception that they are coordinating with political communications staffers.

From what we’ve seen in the first days of this administration, the White House press corps will kiss up to this President with or without coordination.

“While it’s a relief to see briefings return, particularly with a commitment to factual information, the press can’t really do its job in the briefing room if the White House is picking and choosing the questions they want,” one White House correspondent said. “That’s not really a free press at all.”

“It pissed off enough reporters for people to flag it for the WHCA [White House Correspondants Association] for them to deal with it,” another knowledgeable source said.

Multiple sources told The Daily Beast that WHCA leaders advised reporters to push back or not respond to those press office requests. But when asked, Biden’s press team didn’t deny the report. Rather they told the Daily Beast they were asking for the previews to help reporters:

The White House contended that it has tried to foster a better relationship with the press corps than the previous administration, and has tried to reach out to reporters directly in order to avoid appearing to dodge questions during briefings.

“Our goal is to make the daily briefing as useful and informative as possible for both reporters and the public,” a White House spokesperson said. “Part of meeting that objective means regularly engaging with the reporters who will be in the briefing room to understand how the White House can be most helpful in getting them the information they need. That two-way conversation is an important part of keeping the American people updated about how government is serving them.”

Fox News spoke to Spectator USA editor Amber Athey, who used to be a White House correspondent for The Daily Caller. She said that she had never experienced anything resembling what Biden’s communications staff has been accused of. “The Trump administration certainly never asked me for questions in advance and I suspect there would have been universal outrage from reporters if they had done so,”

The most likely reason for the pre-presser request is that the Biden press office doesn’t want to answer a tough question they’re not prepared for, which might force them to tell the truth.

While they are complaining about the Biden team, and continue to demonstrate their loyalty to anything liberal, what the WHPC won’t admit to is that despite all the hatred from the press, Donald Trump took on all questions without asking for a preview.