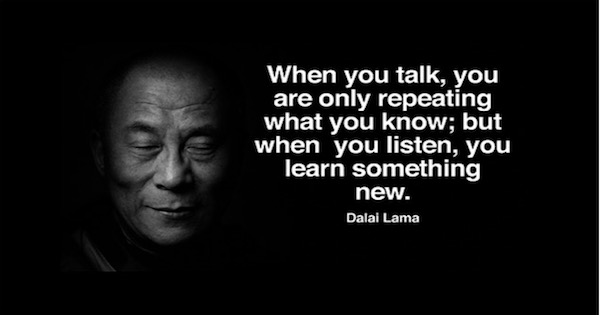 What in the world has gone wrong with America’s college education system? While we knew that liberal college students were losing their minds, I don’t think anyone could have foreseen just how crazy they’d become… but now we know. USC San Diego students are upset that the Dalai Lama, the 1989 Nobel Peace Price winner has been invited to speak to them. Yes, THAT Dalai Lama. The one described by the Nobel committee as:

From his exile in India, the religious and political leader the Dalai Lama has since 1959 stood at the head of the nonviolent opposition to China’s occupation of Tibet.

When the Nobel Committee chose the Dalai Lama, it emphasized that he based his Buddhist peace philosophy on reverence for all living things and the idea of a universal responsibility that embraces both man and nature. It weighed heavily in the Tibetan leader’s favor that he had showed willingness to compromise and seek reconciliation despite brutal violations.

The award of the Peace Prize gave the Dalai Lama the opportunity to present a plan for the restoration of peace and human rights in Tibet. In the plan he recommended that the country be turned into an ecologically stable and demilitarized zone that might serve as a buffer between major Asian powers. The object was to set in motion serious negotiations on the future status of Tibet, but this was rejected by the Chinese government.

The Dalai Lama perfect commencement speaker (but not to the San Diego snowflakes).

The University of California San Diego scheduled the Dalai Lama to deliver the commencement address for the graduating class of 2017. Most people would consider the Dalai Lama to be a “safe” and “non-controversial” choice. I mean, the man has travelled the world preaching love and tolerance for over 50 years, much like a modern day Gandhi. You’d think liberal students would love him.

Students at the University of California, San Diego are protesting an upcoming visit by the Dalai Lama – claiming the Tibetan leader is “oppressive”.

Chinese students are leading objections to the event, which will see the Dalai Lama give a commencement speech on graduation day.

They have claimed that his presence is offensive because of his campaign to make Tibet more independent – contrary to the Communist government’s position that Tibet is a region of China under their control.

Arguments over Tibetan independence have raged for decades – but this dispute is remarkable because activists are conducting it through the language of social justice.

A statement accused university leaders of having “contravened the spirit of respect, tolerance, equality, and earnestness—the ethos upon which the university is built.”

One student posting on Facebook said: “So you guys protest against Trump because he disrespects Muslims, blacks, Hispanics, LGBT.., but invites this oppresser [sic] to make a public speech?? The hypocrisy is appalling!”

Likewise, an alumni group based in Shanghai said UCSD will be breaching its ethos of “diversity” and will leave them “extremely offended and disrespected” if the Dalai Lama’s speech dips into the political.

Chinese officials are known to be extraordinarily hostile to any groups who get close to the Dalai Lama, and do their best to punish governments who engage with the exiled Tibetan regime.

They consider the Dalai Lama a threat to stability in China, akin to a terrorist who wants to split the country.

This is what our liberal education system has wrought; even the Dalai Lama is now too offensive for our college students. We are in big trouble.

For as long as space endures,
And for as long as living beings remain,
Until then may I, too, abide
To dispel the misery of the world.