This Could Be The Start Of Something Big 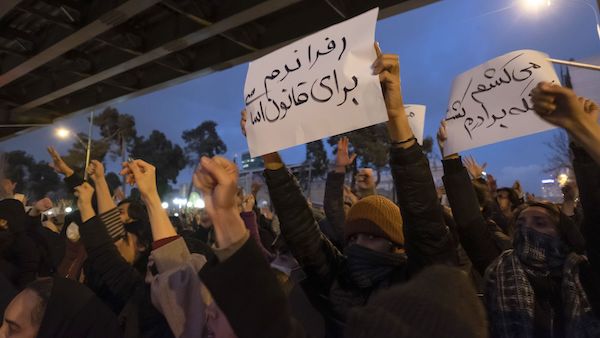 Iranians have gone to the streets of Tehran and demand the ousting of the Ayatollah Khamenei-led theocracy. The tipping point leading to these protests was the downing of the Ukrainian passenger plane, which Iran admitted they shot down by accident. Out of the 176 people who died when their plane was shot out of the sky, 130 were Iranians, 16 were Iranian university students. demands Ayatollah quit

What started out as mourning vigils at four universities for the sixteen Iranian students on the Ukrainian flight boiled over into protests slamming the regime.

They called out the country’s military and the mullahs who run the Islamic republic. They shouted for the Revolutionary Guards to “let go of the country” and, “Death to the dictator!” referring to Supreme Leader Ayatollah Ali Khamenei.

“All these years of crimes, down with the velayat!” students chanted, using a word that refers to the mullahs’ regime.

The crowds formed at Amir Kabir University and at least three other colleges and carried a message diametrically opposed to the one heard from the millions who had amassed for Gen. Qassem Soleimani’s funeral procession through multiple cities last week.

The vast crowds compelled to publicly mourn for Soleimani chanted, “Death to America,” but the students on the streets Saturday turned on the Quds Force leader.

“Soleimani was a murderer, his leader is, too!” was one chant heard Saturday. Posters of the general that had been hung for his funeral were torn down, videos posted online showed.

For a week, we were told by the mainstream media loved Soleimani and the Iranian theocracy led by Ayatollah Khamenei, that was fake news. The protests included some students holding up a  banner that read, “F- -k you & your mistake!”

The American left and media cover relentlessly for Iran’s murderous regime. They claim that staged mass rallies mean the Iranian people are in mourning for Soleimani, and that it’s America’s fault Iran shot down an civilian airliner. https://t.co/mmPQb7xASY

Protests posted to social media showed protesters demanding that  Khamenei resign, thrusting their fists in the air and screaming: “Khamenei is a murderer! His regime is obsolete!”

Other signs of cracks in the Ayatollah’s grip in Iran came from the NY Times:

The semiofficial Fars News Agency, which is affiliated with the Iranian Revolutionary Guards Corps, posted a harsh commentary condemning Iran’s leaders, saying “their shortcomings have made this tragedy twice as bitter.”

“It is pivotal that those who were hiding the truth from the public for the past 72 hours be held accountable, we cannot let this go,” it read.

“Individuals, media, political and military officials who commented in the past 72 hours must be investigated. If they knew of the truth and were deliberately speaking falsehood or for any reason were trying to hide it, they must be prosecuted, no matter what post they hold.”

Siamak Ghaesmi, a Tehran-based economist, addressed the country’s leaders in an Instagram post: “I don’t know what to do with my rage and grief. I’m thinking of all the ‘human errors’ in these years that were never revealed because there was no international pressure. I’m thinking of the little trust left that was shattered. I’m thinking of the innocent lives lost because of confronting and being stubborn with the world. What have you done with us?”

Mohamad Saeed Ahadian, a conservative analyst in Iran, said on Twitter, “There are two major problems with the Ukrainian Airlines issue. One is firing at an airplane and two is firing at the public’s trust. The first can be justified, but the latter is a mistake with absolutely no justification.”

To the brave, long-suffering people of Iran: I've stood with you since the beginning of my Presidency, and my Administration will continue to stand with you. We are following your protests closely, and are inspired by your courage.

And demanded that the Iran government restrain itself in handling the protests.

The government of Iran must allow human rights groups to monitor and report facts from the ground on the ongoing protests by the Iranian people. There can not be another massacre of peaceful protesters, nor an internet shutdown. The world is watching.

At least publicly, Trump’s reaction is the opposite of Former President Obama, who chose not to show support for the 2009 Iranian Green Protest Movement. In his book The Iran Wars, Jay Solomon, who at the time was the chief foreign affairs correspondent for The Wall Street Journal, reported Obama even ordered US agencies, including the CIA, cut off any contacts they had with the Green Movement. Obama’s priority was making friendly overtures to the Iranian theocracy. As America learned by the end of his first term, Obama was obsessed with making peace with Iran as his foreign policy legacy. Whether it was good for the U.S. or not.

The day before the protests, Iranian experts, Mark Dubowitz and Alireza Nader both at the Foundation for Defense of Democracies, wrote in the Canadian newspaper, Globe and Mail, that we should expect “instability in Iran for years to come.” The support of the regime and Soleimani was not what the media was reporting.

The regime does have a significant number of supporters who may be genuinely bereaved and furious at the death of the Islamic Revolutionary Guard Corps general. And Mr. Khamenei is certainly capable of mobilizing his followers. But given a choice, the majority of Iranians would celebrate Gen. Soleimani’s death. He may have been a hero to some for “defeating” the Islamic State and defending the Islamic revolution through his sectarian campaign of bloodshed. But to many more Iranians, he was the leader of the regime’s oppressive apparatus, the senior leader of the Revolutionary Guards and commander of the Quds Force – the driving force behind the regime’s imperialist push throughout the Middle East, which fuelled the rise of the Islamic State.

(…)The Islamic Republic is fundamentally weak and vulnerable to internally driven changes. Forces that support U.S. objectives may emerge. Washington should be patient and wait for its policy of maximum pressure to present the right opportunities.

The Iranian theocracy isn’t going to disappear tomorrow. But these protests against the regime may be the start of a popular uprising just like the one Jimmy Carter helped in 1979, that threw out the Shah. The Iranian people are angry, and it’s not just because of the shooting down the civilian airplane, the theocracy is failing them. But don’t expect the mainstream media to report it.