PROOF! Trump’s Been MUCH Tougher On Russia Than Obama 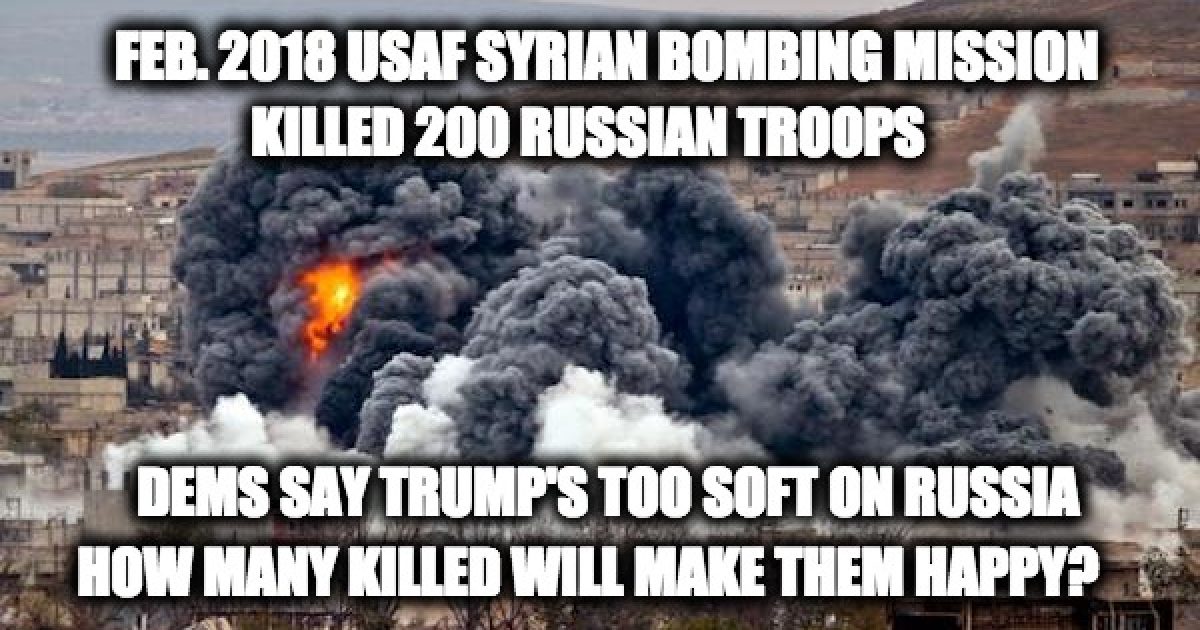 With the whole of the left-wing, fake news media barking in unison that President Donald Trump is somehow a “Russian agent,” his actual record shows that he has been tougher on Russia in less than two years than Barack Obama ever was in eight.

The Trump-hating media has made itself look foolish with the outrageous base assumption that Trump is “working for Russia.” Sure many of these left-wingers may wish that was true, but if you look at the things Trump has actually done concerning Russia, it would be hard to call him overly friendly to the Russian Bear.

Trump himself has noted that he has been tougher on Russia than anyone else.

“The Fake News Media wants so badly to see a major confrontation with Russia, even a confrontation that could lead to war,” he tweeted on July 19. “They are pushing so recklessly hard and hate the fact that I’ll probably have a good relationship with Putin. We are doing MUCH better than any other country!”

The Fake News Media wants so badly to see a major confrontation with Russia, even a confrontation that could lead to war. They are pushing so recklessly hard and hate the fact that I’ll probably have a good relationship with Putin. We are doing MUCH better than any other country!

So, what has Trump done to Russia, anyway?

Quite a lot, actually.

But before we get to the list of sanctions and other things Trump has handed down upon Russia, the most fantastic thing that has happened between Russia and the U.S. occurred in neither Russia nor the U.S.

In February of this year, a large force of hundreds of Russians and Syrians attacked an American position near Al Tabiyeh and Deir al-Zour, Syria. The battle lasted hours but ended with a massacre of the Russian forces. In fact, the U.S. forces even destroyed a Russian-made T-72 tank. By some reports, up to 200 or more Russian mercenaries died in the fight. Hundreds more have been killed over the ensuing months.

According to a description on the battle on the website The War Zone:

“The skirmish occurred on Feb. 7, 2018 when forces aligned with Syria’s dictator Bashar Al Assad, backed by Russian mercenaries from a shadowy company called Wagner, which are possibly under the direct control of the Kremlin, launched an attack on U.S. forces and members of the U.S.-backed Syrian Democratic Forces, a predominately Kurdish group, in eastern Syria. The opposing force consisted of tanks and heavy artillery.

After a massive American counter-attack involving air and artillery strikes beat back the opposing troops, reports emerged afterwards suggesting that as many as 200 Russians had died in the engagement

This was a massive loss for Russian forces, a severe black eye. Naturally, Vladimir Putin has refused to talk about this embarrassing debacle for his armed forces.

Trump crowed about the battle, too.

This is not something that a friend would do to his Russian pals.

Still, while amazing, that is far from the only thing that Trump has done to Russia.

For one thing, Trump has kept the sanctions heaping onto Russia.

In April of last year, for instance, Trump imposed new sanctions on Russia, including strict sanctions on 17 of Russia’s wealthiest individuals. Indeed, these sanctions hit some of Vladimir Putin’s inner circle by preventing them from doing business in the U.S.

In fact, some of these sanctions were tougher than any ever leveled on Putin’s men.

Would a friend of Putin do that?

There is a lot more:

Obama didn’t do any of that.

Indeed, remember Obama’s feckless “red line”? Yeah, neither does anyone else, at least when they are trying to remember foreign policy successes. Obama claimed that the Russians and Syrians better not cross his “red-line.” What a joke. He was a laughing stock over it all and rightly so.

In fact, even Kentucky Senator Rand Paul has noted that if you want an American politician colluding with Russia, you should look no farther than Hillary Clinton.

On July 18, Paul said that he and his fellows in the Senate “actually know who colluded with the Russians.”

Rand was referring to the infamous unverified Steele dossier compiled by Fusion GPS and paid for by the Clinton campaign.

“[Trump] feels like the intelligence community cooked up a political and partisan investigation,” Rand continued, “but also, part of the Mueller investigation is something that should have investigated, and that is: Who hacked into Hillary Clinton’s emails?”

Rand concluded, “There is part of the Mueller investigation that is legitimate and part of it that is a partisan attack on the president.”

Paul has it just right.