Proof That Green Energy is a Load of Crap!

I wonder what the attraction is between the Global Warming people and feces. So many of their “green energy” solutions start with a load of crap, literally. During the summer we learned of the the ultimate dung beetle, a Volkswagen that is propelled via an engine using compressed methane extracted from Human waste.

Now scientist in Great Britain have figured out a way to power homes from human waste. Its easy, just flush the toilet, and wait three weeks. That’s the plan developed by the  Didcot Renewable Gas Project, which will be recycling residents’ “poo”  into renewable natural gas, called “biogas.

Gearóid Lane, managing director of communities and new energy at British Gas, said: “This renewable gas project is a real milestone in Britain’s energy history, and will help customers and the environment alike. Renewable gas has the potential to make a significant contribution to meeting the UK’s energy needs. Gas from sewage is just one part of a bigger project, which will see us using brewery and food waste and farm slurry to generate gas to heat homes.” 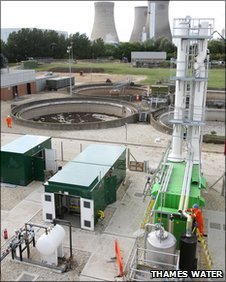 The best part of this process is that this green energy will not turn you green because the renewable gas won’t smell bad or function any differently than the gas already being provided to customers’ homes. This it is the first facility where biogas is made directly from human waste and transferred back to those humans’ homes. Other biogas projects make their product off of agricultural and food waste.

The plant is just a test project, able to provide gas to about 200 homes. But the British government is hopeful that more such projects will help the country reach its goal of 15 percent renewable energy by 2020. Said Martin Baggs, chief executive of the utility company Thames Water.

Wow two hundred homes, no s**t! According to the figures from the gas utility Centrica, which is spearheading the initiative, there is indeed great potential. I guess that makes sense because in the end well everybody does it

One industry expert likened the process to a “cow’s stomach on a life support machine”. The sewage sludge is collected in air-tight vats which are heated and enzymes added to speed the anaerobic digestion process and break down the material. Methane is produced and then it is purified ready for use. Gee, if they examined my brother they could cut out that entire process

Here’s the part of the entire deal that the renewable gas advocates and global warming freaks never think about, because it is more expensive to produce this poop gas, companies say they need to be paid twice the market rate for it to make economic sense. In fact with the exception of Nuclear Power, all of these alternate energy sources have very little effect on lowering the use of petroleum based products, all they do is raise the price of energy and slow down the economy. If anybody tells you anything different, they are just full of…well….man-made biogas.