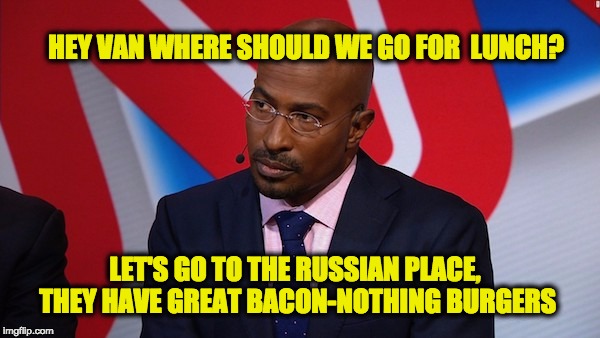 CNN political commentator Van Jones is the latest target for a Project Veritas undercover video. The self-described communist was videotaped saying, “The Russia thing is just a big nothing burger.” CNN figures are being targeted for this sting operation because the network has covered the supposed Russian collusion story to the extent some may believe it’s 24/7, and in many cases has broadcast “news” that turned out to be bogus.

The first all news network on cable has been caught giving false reports about the Russia story, falsely implicating President or his allies. The latest false story connected Trump friend and Wall Street financier Anthony Scaramucci to the $10-billion Russian Direct Investment Fund. That story was removed on Friday, and the reporters behind the story “resigned” or were “resigned.” There are plenty of other examples, many of which can be found here.

The outing of CNN began Monday evening Project Veritas released a video of a medical producer at CNN saying that  he believes the Trump-Russia narrative is “bullshit,” but network head, Jeff Zucker has instructed employees to focus on the Russia story because it boosts the network’s ratings.

Wednesday’s target was Van Jones one of CNN’s most prominent commentators, whose opinions on CNN has included attacking President Trump for his “Putin relationship.” But on the video below he calls the entire Russia story that his network’s concentrated on in recent months, a “nothing burger.”

Despite the accusations, I  have never seen an example where Project Veritas head James O’ Keefe III has edited a video to change the meaning of the conversation.  That said, I would feel more comfortable if more of the conversation with Jones had been included.

Based on recent track records I do trust Project Veritas to give accurate reports more than I trust CNN. Perhaps the network would do a bit better if it went back to 24/7 reporting on the missing Malaysian Airliner.