Project Veritas Latest Video: The Political Shenanigans Behind The Reauthorization Of The Export Import Bank 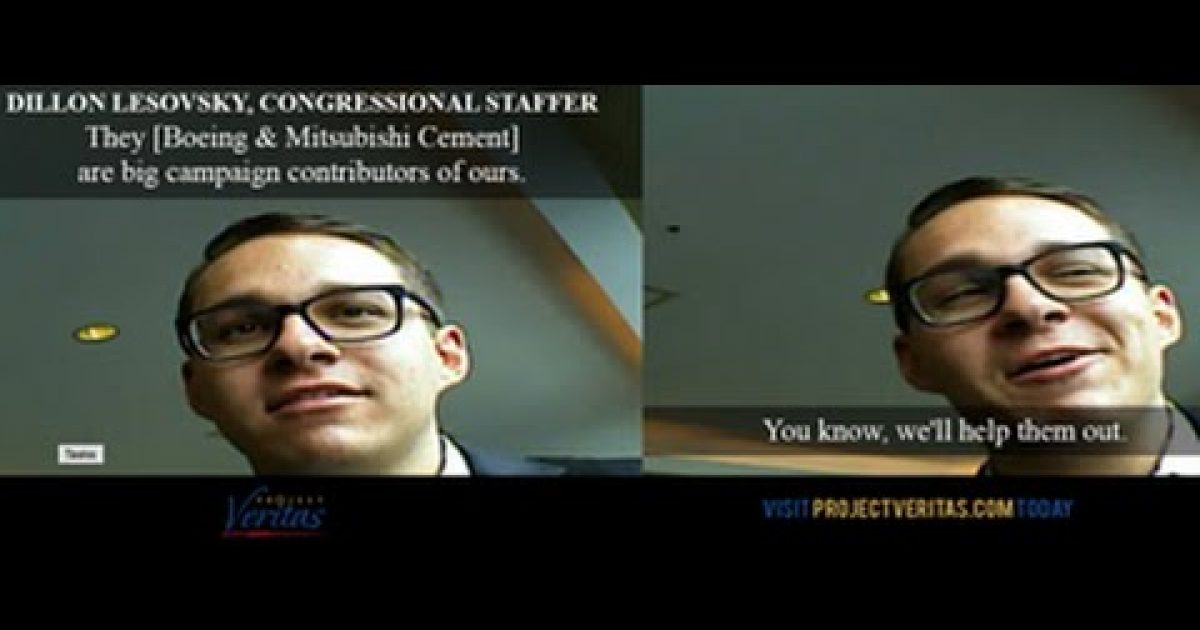 “They are big campaign contributors of ours… you know, we’ll help them out.”

James O’Keefe’s Project Veritas’ latest video shows the federal government’s Export Import Bank is nothing more than a form of corporate welfare that corrupts the political process. Dillon Lesovsky, a staffer who says he runs the political arm for Republican Congressman Paul Cook of California, is  captured on hidden camera admitting that his boss is going to vote in favor of reauthorizing the Bank because large supporters of the EXIM Bank, Boeing and Mitsubishi, were also large contributors to the Congressman and were exerting pressure. “They are big campaign contributors of ours,” said Lesovsky “you know, we’ll help them out.”

Democratic Congresswoman Maxine Waters of California is captured on hidden camera saying that Congress was going to reauthorize the EXIM Bank “like my grandmother use to say… mark my words.” This puts her at odds with fellow California Congressman Paul Cook, whose staffer, Lesovsky, told a Project Veritas reporter that due to “political realities” Congress is not going to reauthorize the EXIM Bank.

Project Veritas caught up with Darlene Jenkins, an employee of the Bank, who was captured on undercover video admitting that large corporations such as Boeing and Caterpillar get a majority of the funds doled out by the bank. Jenkins’ statement is almost as alarming as when Lesovsky tells the Veritas reporter that: “it’s actually influence more than anything” when referring to the campaign contributions of Boeing and Mitsubishi.

Finally Project Veritas also caught up with Leila Aridi Afas, Director of Export Promotion for the U.S. Trade and Development Agency, who are charged with promoting the EXIM Bank. Ms. Aridi Afas was captured on hidden camera saying: “Again, this is insider stuff that you wouldn’t necessarily know about out here. But the Chairman [of EXIM Fred Hochberg] probably played his hand a bit poorly with some folks. And be there and treat them kind of dismissively and stuff, and just rubs, pissed people off so now its like punishment time. That’s a lot of it too. You’re dealing with schoolchildren.”

“The behind the scenes political shenanigans involved with the reauthorization of the Export Import Bank are a great example of what is wrong with American politics,” stated James O’Keefe, President of Project Veritas. “This isn’t a Democrat-Republican or left-right issue; it is legalized bribery at its core. We captured a Democrat, a Republican, an employee of the Bank, and a high-level advocate for the Bank all speaking about the behind the scenes maneuvering that the American people despise. Project Veritas will continue to root out such rampant corruption.”