Schweizer Does It Again With New Book, ‘Profiles in Corruption: Abuse of Power by America’s Progressive Elite’

WOW, This Book Is Going To Make Waves 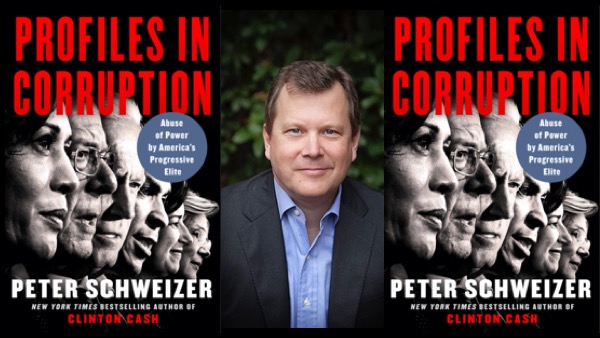 It looks like Peter Schweizer has done it again.  The NY Post ran an excerpt from his new book, “Profiles in Corruption: Abuse of Power by America’s Progressive Elite.”  Just based on the excerpt, this book is going to be a great read and it is going to make waves. I can’t wait to read the entire book when it comes out on January 21st.

This particular excerpt covers the family of Joe Biden, If you think that Hunter Biden is Joe’s only issue –think again. As Schweizer explains, Biden “emerges as the king of the sweetheart deal, with no less than five family members benefiting from his largesse, favorable access and powerful position for commercial gain. In Biden’s case, these deals include foreign partners and, in some cases, even U.S. taxpayer dollars.”

Remember when Joe Biden said, I never talked with my son or my brother or anyone else — even distant family — about their business interests. Period”? After reading the book excerpt, that comment does not seem to be true. Schweizer demonstrates, ” apparent enrichment of the Biden family involves no less than five family members: Joe Hunter’s son, son-in-law Howard, brothers James and Frank, and sister Valerie.” On the bright side, it proves that Uncle Joe is a family man.

The president of HillStone International was Kevin Justice, a longtime Biden family friend. White House visitor logs reveal that Justice visited  Michele Smith, who worked in the office of VP Biden on November 4, 2010. Three weeks later, HillsStone announced that James Biden, Joe’s baby brother was their new Exec. Vice President. This is even though HillStone is part of the huge construction management firm, Hill International and James had no construction experience. After James joined the company, it started having greater success in securing government contracts. Was it because of Brother Joe, the V.P.?  Schweizer provides evidence in the book that it probably was. It makes me wonder if I can convince my brother to run for a high political office.

Also, in Profiles in Corruption, Peter goes into greater depth about how Joe Biden used his political office to help his son Hunter’s career.

Joe Biden’s daughter, Ashley, married a nice Jewish doctor named Howard Krein. Howard and his siblings opened a medical investment consulting firm called StartUp Health.  In 2011, pretty soon after StartUp Health opened its doors, two of its executives were invited to the White House to meet with Biden and his boss Barack Obama. The next day, this brand-spanking-new company was “featured at a large health care tech conference being run by the U.S. Department of Health and Human Services (HHS), and StartUp Health executives became regular visitors to the White House, attending events in 2011, 2014 and 2015.”

In March 2009, Biden went to Costa Rica. He was the first high-ranking American official to visit that country in a dozen years.

Joe Biden’s trip to Costa Rica came at a fortuitous time for his brother Frank, who was busy working deals in the country. Just months after Vice President Biden’s visit, in August, Costa Rica News announced a new multilateral partnership “to reform Real Estate in Latin America” between Frank Biden, a developer named Craig Williamson, and the Guanacaste Country Club, a newly planned resort.
(…) Joe Biden had been asked by President Obama to act as the Administration’s point man in Latin America and the Caribbean.

Frank’s vision for a country club in Costa Rica received support from the highest levels of the Costa Rican government— despite his lack of experience in building such developments. He met with the Costa Rican ministers of education and energy and environment, as well as the president of the country.

Gee, how does someone with no experience such as Frank Biden, gain access to, and approval from “the highest levels of the Costa Rican government”?  Is it because his brother, the Vice President of the United States, is the Obama Administration’s point man in Latin America and the Caribbean?

Biden’s sister Valarie, a political consultant, has gotten rich just because her brother runs for political office. Joe’s failed presidential campaign ended up paying $2.5 million in consulting fees in 2008 alone. Man! I am going to talk to my older brother and try to convince him to run for a high political office.

After getting a taste of “Profiles in Corruption: Abuse of Power by America’s Progressive Elite in the summary excerpt in the NY Post, I can’t wait to get a copy of the book. Just like Clinton Cash, and Secret Empires, this book will explain how progressive politicians take advantage of their positions and our taxpayer dollars to enrich themselves and their families.

And just as he’s done with every other book he’s written in Profiles in Corruption: Abuse of Power by America’s Progressive Elite every claim and every fact will be backed up by corporate documents and legal filings from around the world. And it’s not just about Biden, Peter Schweizer’s new book investigates the private finances and secrets deals of some of America’s top political leaders

I will be getting my copy of Peter Schweizer’s new book Profiles in Corruption: Abuse of Power by America’s Progressive Elite the day it comes out, January 21. You probably should too!