UPDATE: Boca Raton Principal Who Questioned Holocaust Is Reassigned-Blames Others 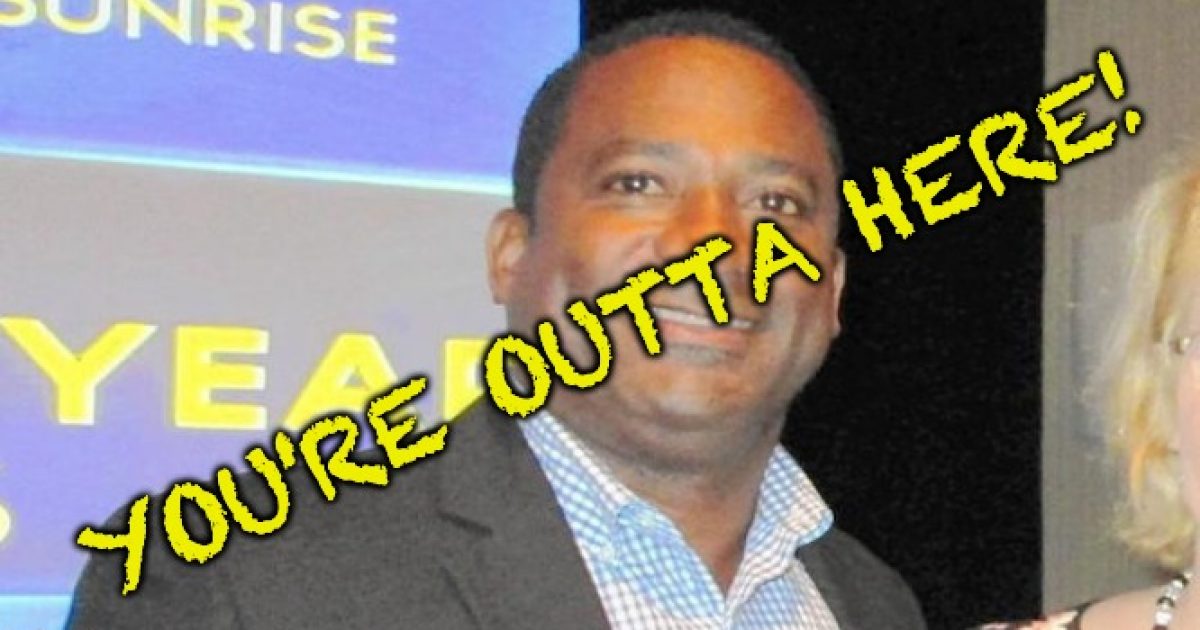 Update at the end of this post  Principal Latson Holocaust

Those who don’t know history are doomed to repeat it.” ― Edmund Burke, 18th Century political philosopher.

Regarding the Holocaust, Burke’s famous line was cut down to “Never Forget.” But even that shortened line seems to have been forgotten. And that memory lapse seems to have happened in one of the most unlikely of places, Palm Beach County, Florida, where a High School Principal told a parent “I can’t say the Holocaust is a factual, historical event.”

As reported by the Palm Beach Post, it started in April of 2018. William Latson Principal of Spanish River Community High School, a public H.S. serving Boca Raton and Delray Beach, was asked by a student’s mom if the Holocaust was taught in the school.

The principal explained the school had “a variety of activities” for Holocaust education, but:

“The curriculum is to be introduced but not forced upon individuals as we all have the same rights but not all the same beliefs. Each year we do a Holocaust assembly, and we target the 10th graders so every year that group will get a day’s work with the Holocaust. We advertise it to the 10th-grade parents as some do not want their children to participate, and we have to allow them the ability to decline. By doing it in that grade level, every student will get the opportunity before they graduate.”

Not all the same beliefs? That’s strange; the Holocaust is not a belief it’s something that actually happened

Thinking that the principal couldn’t have meant what his words seemed to say, the parent sent the principal a letter asking him to clarify his position. Mr. Latson forgot the rule about when you find yourself in a hole—stop digging as this second response was worse than the previous one, saying in part:

“The clarification is that not everyone believes the Holocaust happened, and you have your thoughts, but we are a public school, and not all of our parents have the same beliefs so they will react differently. My thoughts or beliefs have nothing to do with this because I am a public servant. I have the role to be politically neutral but support all groups in the school. I work to expose students to certain things, but not all parents want their students to be exposed, so they will not be, and I can’t force that issue. One must understand that. In a public school setting the school ‘can’t take a position but provide information and allow parents to work with their students on what they want their children to understand.

“I can’t say the Holocaust is a factual, historical event because I am not in a position to do so as a school district employee. I do allow information about the Holocaust to be presented and allow students and parents to make decisions about it accordingly. I do the same with Information about slavery, I don’t take a position but allow for the information to be presented and parents to be parents and educate their students accordingly. I am not looking for a situation to divide but just to let All know I don’t have a position in the topic, as an educator. My personal beliefs are separate and will always be as they have no place in my profession.”

Principal Latson seemed to be saying that he believed the Holocaust was real but that there were parents in the district who didn’t think it real and he had to be fair. But there is nothing unfair about telling the truth.

Principal William Latson didn’t say whether he had those crazy beliefs himself, but that there were people who didn’t believe the Holocaust was real and he had to be fair.

According to the U.S. State Department, Holocaust denial and revisionism are forms of Antisemitism. They are generally motivated by hatred of Jews and build on the claim that the Holocaust was invented or exaggerated by Jews as part of a plot to advance Jewish interests.

As an educator,  Principal Latson must realize that the denial or distortion of history is an assault on truth and understanding. Understanding and never forgetting the memory of the past is crucial to how we understand ourselves, our society, and our goals for the future. Intentionally denying or distorting the historical record threatens public understanding of how to safeguard democracy and individual rights. That’s why horrors of the past, such as the Holocaust, Slavery, Jim Crow, and Apartheid, must be taught to our kids. They all happened!

Surely there are parents in Boca Raton or Delray Beach, who don’t believe that the big bang happened, that the universe is billions of years old, or man descended from apes. And believe it or not there really is a Flat Earth Society, does River Community High School teach the earth is round?    Principal William Latson allowed the teaching of those proven theories which some people don’t believe happened, but at the same time made Holocaust education optional.

A second parent approached Latson and told him that even the Holocaust lessons on the curriculum were actually taught in the classroom.

She asked that teachers be required to document their Holocaust lessons and readings. The suggestion was initially embraced, she said, but ultimately ignored.

Both mothers recalled that Latson again was reticent to state that the Holocaust was a historic event, a fact that angered the second mother, who expected the meeting would have resolved any tensions.

Instead, the second mother said, “I came out of there feeling so much worse. How do you pick and choose history?”

Compounding the principal’s weak-kneed stance against Holocaust-denying parents is the demography of Palm Beach County. There are those who joke that Boca Raton and Delray Beach are G-d’s waiting room because that’s where old Jews go to die. Truthfully the Jewish population is larger and more diverse than that stereotype.

A 2019 study of Palm Beach County reported that the population was almost 20% Jewish, that’s 14x more concentrated than the entire country which is only 1.4% Jewish.  The fastest-growing segment of the county’s Jewish population was young families with 22,000 children, but county population also includes “12,000 Holocaust survivors.” Principal Latson’s comments must have hit them like a smack in the face.

I would suggest that there is no such thing as “politically neutral”  when it comes to the Holocaust and that children whose parent’s don’t believe the Holocaust happened, desperately need that Holocaust education program.

The first mom went over the principal’s head and spent the year between her first exchange with the principal and when it became public fighting to make Holocaust education required, including a reading of Elie Wiesel’s “Night” and mandatory assemblies for each High School grade.

Latson agreed to assign “Night” to all sophomores, and District Deputy Superintendent Keith Oswald said the school didn’t have time to implement the change last year, they will be applied for the 2019-2020 year.

Since the news of the email exchange was released, there have been many calls for Latson to resign or be fired. But Latson seems to have truly committed himself to atonement.

William Latson apologized, telling the Post, “I regret that the verbiage that I used when responding to an email message from a parent, one year ago, did not accurately reflect my professional and personal commitment to educating all students about the atrocities of the Holocaust. It is critical that, as a society, we hold dear the memory of the victims and hold fast to our commitment to counter anti-Semitism.”

He also took a four-day trip to the American Holocaust Museum last summer to learn more about the Shoah.

‘Never Forget” has meaning; those who forget the lessons of history are doomed to repeat them. And now it seems at Spanish River Community High School, the horrors of the Holocaust will not be forgotten. Hopefully, some students will be teaching their Holocaust-denying parents that the Shoah is an actual historical event.

“As Board Chairman, and on behalf of The School Board of Palm Beach County, I take this opportunity to reaffirm the Board’s commitment to Holocaust Education. The School Board of Palm Beach County is, and always has been, committed to teaching all students, in every grade level, a historically accurate Holocaust curriculum; one which leaves no room for erroneous revisions of fact or the purge of anti-Semitism.

Every generation must recognize, and learn from, the atrocities of the Holocaust’s incomprehensible suffering and the enduring stain that it left on humankind. It is only through high-quality education and thought-provoking conversations, that history won’t repeat itself.

As a Board, we are committed to doubling down, educationally, with school and community visits geared at enlightening any student or staff who doubts or questions the undeniable facts of the Holocaust.

He finishes with an indication that something big was brewing:

The School Board of Palm Beach County appreciates the feedback from those in our community who have made their voices heard following the publication of email messages between a parent and a principal. It is only through thoughtful conversation that we continue to best serve the educational expectations and needs of our students.

One day later, on Monday, July 8th, the other shoe dropped. The Palm Beach School District announced that Principal William Latson was an ex-Principal. Mr. Latson was being reassigned out of Spanish River HS to the district administration building.

It is out of an abundance of concern and respect for the students and staff of Spanish River Community High School that School District Administration has decided to reassign Principal William Latson effective immediately.

Mr. Latson made a grave error in judgment in the verbiage he wrote in an email stating, “I can’t say the Holocaust is a factual, historical event because I am not in a position to do so as a school district employee.” In addition to being offensive, the principal’s statement is not supported by either the School District Administration or the School Board.

Additionally, he was instructed to further expand the Holocaust curriculum at Spanish River. He also spent several days at the United States Holocaust Museum to increase his personal knowledge.

Despite these efforts, his leadership has become a major distraction for the school community. It is, therefore, in the best interest of students and the larger school community to reassign Mr. Latson to a District position. The Regional Office will immediately follow the District’s process in the selection of a principal for Spanish River High School.

In a statement after the announcement, Mr. Latson blamed the mother even though it was his written answers that got him in trouble:

“I have been reassigned to the district office due to a statement that was not accurately relayed to the newspaper by one of our parents. It is unfortunate that someone can make a false statement and do so anonymously and it holds credibility but that is the world we live in.”

Excuse me former Principal Latson, but you weren’t moved because of what the mom said, you were reassigned because of what you wrote in your emails which were published by the Post. And in the statement announcing your reassignment (above), the district said  “Mr. Latson made a grave error in judgment in the verbiage he wrote in an email” nothing about the Mothers’ comments.

Latson was lucky to be reassigned because many politicians called for him to be fired including U.S. Senator from Florida Rick Scott.

Spoke with @SuptFennoy this morning. This Principal should have been fired, not simply reassigned.

When first writing this post on Sunday, I said that Mr. Latson was trying to atone for his error. That was a mistake in my judgment. Based on his response to his reassignment, it’s obvious he still doesn’t understand the breadth of his error.