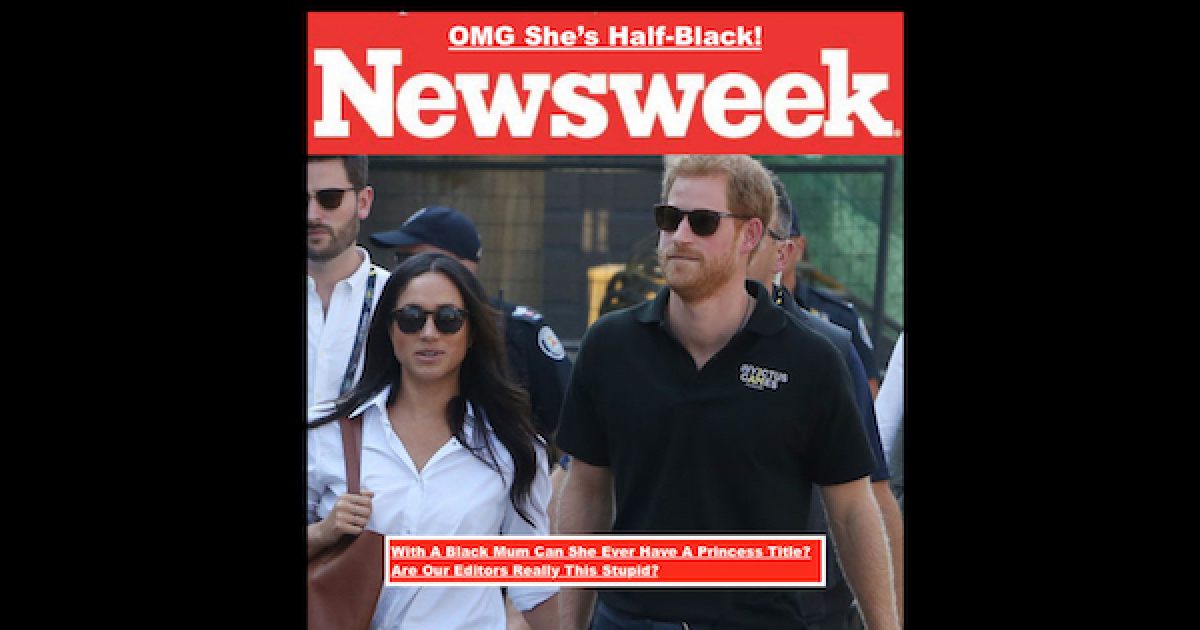 The once respected news magazine Newsweek was seen fanning the flames of racial hate this week with a dishonest, National Examiner-styled piece on how actress Meghan Markle “won’t be allowed to be a black princess” with her marriage to Britain’s Prince Harry.

On November 27, the magazine’s Lauren Gill penned a piece that is far more befitting of the salacious store checkout counter rags such as The Globe or The National Enquirer. The title of this dreck even reflects a gossip rag-type feel, screaming in all caps: “MEGHAN MARKLE ‘WON’T BE ALLOWED TO BE BLACK PRINCESS’ BY ROYAL FAMILY, EXPERTS SAY.”

One should feel dirty even reading that title.

Gill employed one of the classic, dishonest practices of the gossip rags that sit near the cash register at your grocery store. That is the writing trick of drumming up some hate speech or inventing a medical scare for a celebrity, not by quoting the subject of the article or their doctors, but to quote some “expert” or “doctor” who has never met nor treated the celebrity in question.

“Experts say that [put your favorite celebrity here] only has six months to live.” Then somewhere down in the piece, you’ll see a “doctor” say that said celebrity is suffering from some deadly disease that will surely kill them in weeks. But also in the piece you will inevitably see, “[doctor such-and-such], who hasn’t treated [the celebrity] says that…”

In other words, what you end up with is some doctor of dubious credentials who has never met nor treated the celebrity is making the wild, unsubstantiated claim that said a celebrity is ill. The story is essentially a lie based on nothing but a salacious claim.

That, as it happens, is exactly what Newsweek did with it’s Nov. 27 piece discussing how the bi-racial actress will be treated by the U.K.’s Royal Family.

In her piece, Gill got right to the point of calling the Royals racists:

“Britain’s relationship with race will change forever,” screamed the headline above a Guardian column after news of Prince Harry’s engagement to Meghan Markle broke on Monday, but the excitement might be premature — Markle will likely be instructed by royal advisors to hide that she is biracial and probably won’t end up doing much to improve the rocky race relations in the United Kingdom, according to two noted British scholars.

Ah, so, the bi-racial actress will be told “she isn’t allowed to be black” if she marries Prince Harry.

How does Gill know? Well, she found one of the National Enquirer’s “experts” to tell her so:

“She won’t be allowed to be a black princess. The only way she can be accepted is to pass for white,” Kehinde Andrews, an associate professor of sociology at Birmingham City University who launched the first black studies degree in Europe, told Newsweek. “If there are people who are celebrating, it’s a bit naive, and they’ll be very disappointed.”

So, Gill found some nutcase whose entire career depends on making all white people out to be racists to “confirm” that Meghan Markle will have to pretend she isn’t bi-racial if she is to “fit in” inside the royal court.

Of course, I would not be surprised if the Royal family were to advise Markle not to go all Jesse Jackson on them. After all, propriety and respectability are the hallmarks of the British Crown. They don’t run around acting like uncouth Black Lives Matter protesters. They have genteel standards of behavior befitting royalty.

But, knowing ahead of time that Mz Markle is bi-racial, it is also a sure bet that they have counseled her to be a worthy representative of her background. Yes, she should respect her father’s racial background, but doing so while presenting herself as the sort of serious person the British people can proudly call their own.

Markle would be smart to accept this advice and not go all hood-rat on the U.K.

It is highly doubtful that in this day and age, and knowing that Markle has penned articles in the past saying how proud she is of her racial makeup, that the Queen and her staff would try to muzzle the actress and pretend she is not bi-racial.

Ah, but then we could not have the race baiters at Newsweek whipping up hate based on the say-so of some agenda-driven, race-baiting “professor” whose job is only secure if race hatred is always heated to the boiling point.

Newsweek should be ashamed of itself. But that would suppose that liberals such as Lauren Gill would have a conscience and a sense of shame.