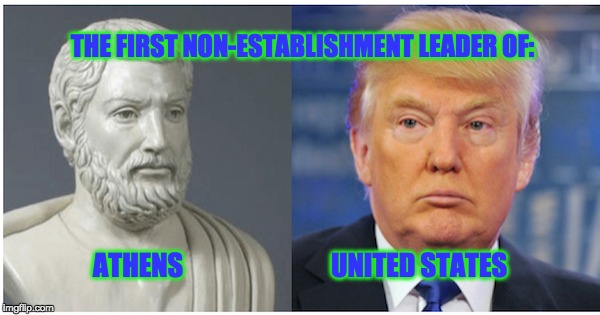 Donald Trump’s meteoric rise from businessman to the most powerful man in the world and defender of the United States has been something.  But to say it is unprecedented would be being a poor student to history.

Watching Trump in his first weeks of taking the oath of office and the steps he is taking to revitalize this country and protect it from foreign invaders, I am reminded of another man long ago in antiquity who I find very similar.

To understand what I mean you must first understand who Themistocles was and see if any of his story sounds somehow familiar in the present.

Themistocles was a Greek politician from Athens some five centuries before the birth of Christ.  He was a new type of politician as he was not from the aristocracy class who had run all the political matters of Athens before, but a choice of the people reflecting the new democracy instilled in the city.

As a politician, Themistocles was a populist, having the support of lower class Athenians, and generally being at odds with the Athenian nobility.

The Greeks during this time had to face a constant threat from Persia, which consists of modern day Iran and its empire covering most of the middle east from Turkey to the border of India.

After the first Persian conflict ended at the battle of Marathon, Themistocles didn’t sit back and think that Athens was safe but rather, in the years after Marathon, and in the run up to the second Persian invasion he became the most prominent politician in Athens. He continued to advocate a strong Athenian navy, and in 483 BC he persuaded the Athenians to build a fleet of 200 triremes; these would prove crucial in the forthcoming conflict with Persia.

Themistocles was proven right and his foresight and commitment to defending his homeland saved Athens, and by extension all of Greece, from being conquered by Persia.  Of course, as is true today, there are always haters.

He aroused the hostility of Sparta by ordering Athens to be re-fortified, and his perceived arrogance began to alienate him from the Athenians.  Moreover his fellow citizens had become jealous of his prestige and power.

The Rhodian poet Timocreon was among his most eloquent enemies, composing slanderous drinking songs. Meanwhile, the Spartans actively worked against him, trying to promote Cimon (son of Miltiades) as a rival to Themistocles. Furthermore, after the treason and disgrace of the Spartan general Pausanias, the Spartans tried to implicate Themistocles in the plot; he was, however, acquitted of these charges. In Athens itself, he lost favor by building a sanctuary of Artemis, with the epithet Aristoboulẽ (“of good counsel”) near his home, a blatant reference to his own role in delivering Greece from the Persian invasion. Eventually, in either 472 or 471 BC, he was ostracized. In itself, this did not mean that Themistocles had done anything wrong; ostracism, in the words of Plutarch,

“was not a penalty, but a way of pacifying and alleviating that jealousy which delights to humble the eminent, breathing out its malice into this disfranchisement.”

In other words, Themistocles was railroaded.

I mean, he built a temple by his house.  How often do we hear about Trump’s Hotel by the White House, as if that really matters to how well he can serve as President.

But let us look at what others have said about Themistocles and their assessment of his character and see if it reminds you of anyone.

From a contemporary Thucydides:

“Themistocles was a man who exhibited the most indubitable signs of genius; indeed, in this particular he has a claim on our admiration quite extraordinary and unparalleled. By his own native capacity, alike unformed and unsupplemented by study, he was at once the best judge in those sudden crises which admit of little or of no deliberation, and the best prophet of the future, even to its most distant possibilities. An able theoretical expositor of all that came within the sphere of his practice, he was not without the power of passing an adequate judgment in matters in which he had no experience. He could also excellently divine the good and evil which lay hid in the unseen future. In fine, whether we consider the extent of his natural powers, or the slightness of his application, this extraordinary man must be allowed to have surpassed all others in the faculty of intuitively meeting an emergency.”

If I replaced the name Themistocles with Trump, could you find fault with the summation?  Anyone who actually knows Donald Trump praises his brilliance, his natural gifts and his ability to quickly and effectively grasp situations and concepts.

Now, there are some who say that Trump is just lucky because his father was rich and that he isn’t a self made man like Themistocles.  That’s ironic because Themistocles was accused of having an unfair advantage of being born well off and being lucky enough to be from Athens which gave him an advantage over others.

In this we look to Plato for a story of how Themistocles handles such criticism:

“Timodemus of Aphidnae, who was one of Themistocles’ enemies but not a man of note, was crazed with envy and spoke bitterly to Themistocles of his visit to Lacedaemon, saying that the honors he had from the Lacedaemonians were paid him for Athens’ sake and not for his own. This he kept saying until Themistocles replied, ‘This is the truth of the matter: if I had been a man of Belbina I would not have been honored in this way by the Spartans, nor would you, sir, for all you are a man of Athens.’ Such was the end of that business.”

In the modern tongue that might need a little clarification and explanation.  Plato tells us that Timodemus is originally from the small island of Serifos, a politically powerless little island in the Aegean.  Basically what Themistocles said is that “yes, I have been fortunate in being born into my life in Athens but I have played that hand well and made the most of it.  And though, if I had been born on a small island like Belbina I may have not achieved it all, had you born in Athens you couldn’t have done what I have.”

Let’s take a look at what a modern author has to say about Themistocles.  Tom Holland wrote the book, Persian Fire and in it details Themistocles’ role in saving the nation of Greece and how he went about doing it.

“What precise heights of oratory he attained, what stirring and memorable phrases he pronounced, we have no way of knowing…only by the effect it had on the assembly can we gauge what surely must have been its electric and vivifying quality—for Themistocles’ audacious proposals, when put to the vote, were ratified. The Athenian people, facing the gravest moment of peril in their history, committed themselves once and for all to the alien element of the sea, and put their faith in a man whose ambitions many had long profoundly dreaded.”

A bit about the part that I put in bold type.  The Oracle of Delphi, when asked how to protect Athens from the Persians replied that they need a wooden wall.

While most discounted the oracle, Themistocles argued that the “wooden wall” was absolutely necessary.  It didn’t actually take the form of a wall per se but rather a fleet of wooden ships but still.  The fact that so much of Themistocles success hinged on a “wall” is downright spooky when compared to Trump’s success in the same.

Holland also speaks of how Themistocles was elected in the first place:

“He wooed the poor; and they, not used to being courted, duly loved him back. Touring the taverns, the markets, the docks, canvassing where no politician had thought to canvas before, making sure never to forget a single voter’s name, Themistocles had set his eyes on a radical new constituency”

I feel like I need to tell you that this Persian Fire was written over 12 years ago when NO ONE was talking about Trump becoming President yet Holland could as easily have been writing this book about him.

One would think that with all that he had done, Themistocles would have been a hero to one and all.  Unfortunately that was not the case.  Hater’s gotta hate out of spite or jealous or greed and as I stated earlier plots and lies were constructed to eliminate Themistocles and he fled.  This is where a diversion pops up between Themistocles and Trump as I think the latter would never just flee against his political rivals but would fight tooth and nail against their machinations.

But I will say this for Themistocles, even though he had to flee for his life due to the plots of his enemies, he never raised a sword against Greece.

Diodorus of the first century BC had this to say on the matter:

“But if any man, putting envy aside, will estimate closely not only the man’s natural gifts but also his achievements, he will find that on both counts Themistocles holds first place among all of whom we have record. Therefore one may well be amazed that the Athenians were willing to rid themselves of a man of such genius.”

What Diodorus is saying is that if anyone could put their politics, envy and greed aside and look at things objectively they would admit that Themistocles was one of the greats.  Remember, Diodorus wrote also of Alexander the Great and Hannibal so Themistocles is in rarefied company.

If the modern media, Hollywood elites and political rivals actually gave Trump a fair shake, their demented delusions and mouth foaming vitriol would at least be lessened.  Yet I hold little hope that fairness will come from the radical progressives any time soon.  But as is the case, history will be the judge.

The love of country is evident in both Themistocles and Trump and their actions to keep their countries safe should be heralded and cheered.  Regrettably, though it has been a few thousand years, somethings have yet to change and the greed and hate of those who would undermine a nation for their own petty gain still exist to this day.

So yes, Trump is a modern day Themistocles.  A man of great ambition, intellect and love of country that we need now in order to protect what we have and to regain what we have lost.