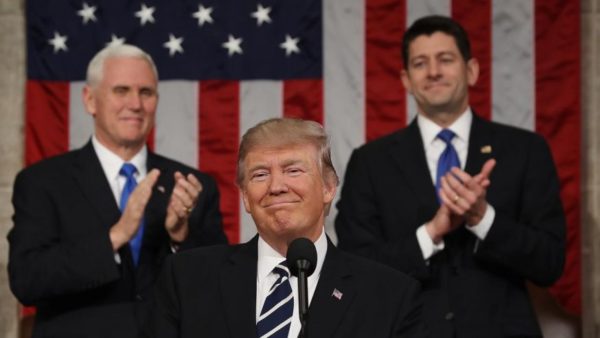 Going into his first address to congress, the word was that President Trump needed to deliver a home run to reset his relationship with congress. He did better than that, Donald Trump delivered a grand slam!

Five weeks into his presidency, Donald Trump delivered his first address to a joint session of Congress and for the first time since he came down the escalator in Trump Tower to announce his campaign, he looked and sounded presidential. This was an optimistic and empathetic President Trump. He didn’t abandon the policies that got him elected, but changed the way he talked about them and in doing so, he may have broadened his appeal beyond his supporters and his party.

President Trump reached out to the millions of Americans who did not vote for him. Sadly the Democrats in attendance slapped away the president’s out-reached hand.

He opened his speech with a message about bigotry

Tonight, as we mark the conclusion of our celebration of Black History Month, we are reminded of our Nation’s path toward civil rights and the work that still remains.  Recent threats targeting Jewish Community Centers and vandalism of Jewish cemeteries, as well as last week’s shooting in Kansas City, remind us that while we may be a Nation divided on policies, we are a country that stands united in condemning hate and evil in all its forms.

And he peppered his speech  with appeals for unity and for people on both parts of the aisle to put aside long-standing disputes to work toward a common goal of bettering the lives of Americans. He insisted that both sides of the aisle should help craft his agenda.

(…)”My administration wants to work with members in both parties to make child care accessible and affordable, to help ensure new parents have paid family leave, to invest in women’s health, and to promote clean air and clear water, and to rebuild our military and our infrastructure,”

(…)True love for our people requires us to find common ground, to advance the common good, and to cooperate on behalf of every American child who deserves a brighter future.

Trump talked about his program for economic recovery. He repeated his vow to fix the nation’s roads, bridges and other infrastructure with a $1 trillion program financed by public and private capital and explained that slashing regulations and tax cuts for business and the middle class would jump-start the economy.

The president called for lawmakers to work with him illegal immigration, he spoke about the wall, a new office within DHS to help victims of crimes by illegal aliens, but also called for the two parties to get together on the hot button issue of immigration reform:

I believe that real and positive immigration reform is possible, as long as we focus on the following goals: to improve jobs and wages for Americans, to strengthen our nation’s security, and to restore respect for our laws. If we are guided by the well-being of American citizens then I believe Republicans and Democrats can work together to achieve an outcome that has eluded our country for decades.

And he called for both parties to work together on Obamacare:

Tonight, I am also calling on this Congress to repeal and replace Obamacare with reforms that expand choice, increase access, lower costs, and at the same time, provide better Healthcare.

(…) Obamacare is collapsing –- and we must act decisively to protect all Americans.  Action is not a choice –- it is a necessity.

So I am calling on all Democrats and Republicans in the Congress to work with us to save Americans from this imploding Obamacare disaster.

Not everyone agreed with Trump about unity. Most Democrats sat on their hands as directed by their leaders, and as Tommy Christopher pointed out Nancy Pelosi did her best imitation of a sourpuss.

This reaction by @NancyPelosi is EVERYTHING #SOTU @Shareblue pic.twitter.com/nW9Qf8tSZS

Senate Minority Leader Chuck Schumer criticized the speech before it was even given.

The most emotional moment of the night came near the end when Trump honored the widow of Navy SEAL William “Ryan” Owens, who was killed in a controversial counterterrorism raid he ordered in Yemen.

We are blessed to be joined tonight by Carryn Owens, the widow of a U.S. Navy Special Operator, Senior Chief William “Ryan” Owens.  Ryan died as he lived:  a warrior, and a hero –- battling against terrorism and securing our Nation.

I just spoke to General Mattis, who reconfirmed that, and I quote, “Ryan was a part of a highly successful raid that generated large amounts of vital intelligence that will lead to many more victories in the future against our enemies.”  Ryan’s legacy is etched into eternity.  For as the Bible teaches us, there is no greater act of love than to lay down one’s life for one’s friends.  Ryan laid down his life for his friends, for his country, and for our freedom –- we will never forget him.

Republicans and most Democrats stood and gave Mrs Owens a standing ovation that lasted over two minutes. And Carryn Owens with tears in her eyes, she stood and clapped while she looked upwards to deliver a message of love to her late husband. 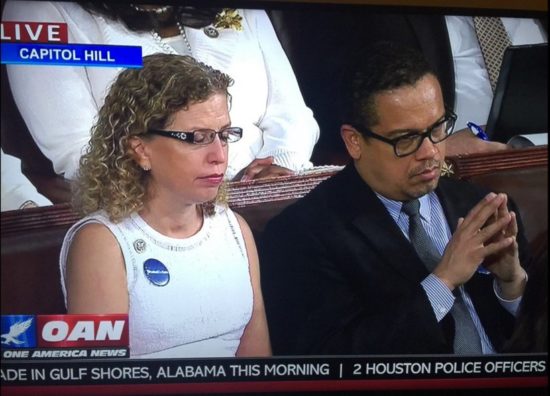 But shame on Nancy Pelosi, Debbie Wasserman Schultz, and Keith Ellison, who not only didn’t stand but they didn’t even clap. The Democratic Party leadership put partisan politics in front of honoring a war widow.

In his first speech to congress, President Trump who isn’t known as a great speaker, delivered a spectacular speech that surprised in both content and delivery. The speech was exceptional, not just judged by Donald Trump’s standards, but it was one of the better presidential speeches I can remember. He delivered a bi-partisan speech that invited both parties to work together to improve the lives and safety of all Americans.

Sadly this president who called for unity, and delivered a bi-partisan speech was met by an opposition party that cared only about politics and not appearing to cooperate with the Republican president. Hopefully the American people will notice that the Democratic Party puts partisanship before the needs of the people.

Below is a video of the President’s speech: