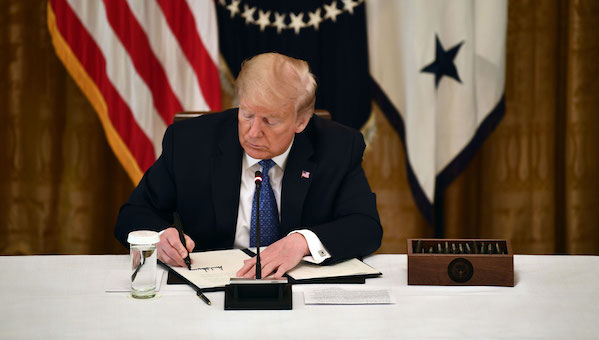 President Trump directing the federal government to cut more regulations. The most visual of which will be in the medical field.

The Trump administration is looking to slice through the occupational regulations permanently that hinder doctors and other medical professionals to help spur on economic growth in recovery throughout the coronavirus pandemic. Many of these same regulations were initially suspended to help with the COVID-19 cases swamping hospitals.

Tomas Philipson, acting chairman of the White House Council of Economic Advisers, said, “The White House has a great interest in further cutting down occupational regulations or state licensing requirements that are unnecessary. Obviously, we want to have exams for medical doctors, etc., but that’s something that I think is very valuable in terms of an overall economic agenda.”

The Trump administration has suspended scores of healthcare regulations to give the industry latitude in responding to the pandemic. It has deregulated telemedicine, for example, by allowing doctors to get paid for seeing patients electronically as opposed to in a doctor’s office. Previously, doctors were penalized for seeing patients on a Zoom call, for example, Philipson said, instead of in person.

Giving patients and doctors telemedicine options could boost growth because people often take a day or two days off work to go and see a doctor in person, which Philipson said is “a lot of time off for people in the workforce.”

One of the significant regulations that were suspended during this time of crisis was in New York City, where medical licensing rules were put on hold, allowing doctors and nurses to practice across state lines more easily. This helped reduce the burden on hospitals in the city who were experiencing a lack of medical personnel.

It’s more than only medical regulations, however.

President Trump signed a new executive order last Tuesday that directs the heads of all federal agencies to “identify regulatory standards that may inhibit economic recovery,” if they don’t impair public health or safety.  He added, “Agencies should address this economic emergency by rescinding, modifying, waiving, or providing exemptions from regulations and other requirements that may inhibit economic recovery.”

Deregulation has been a big part of President Trump’s economic agenda. It’s incredible what can be accomplished when you slash the red tape. People forget that tax cuts were not the only reason the economy got hot before the CoronaVirus shutdown. A considerable part of the recovery was the cutting of government regulations and red tape that tied the hands of businesses and empties their wallets.

During his first year as POTUS, the Trump administration got rid of twenty-two regulations for every one added, and the regulation removal has continued throughout his administration. “President Trump is achieving more on regulatory reform than many thought possible,” Anthony Campau, a visiting fellow in regulatory policy at The Heritage Foundation, said in an October 2009, written statement.

Campau previously oversaw many Trump administration regulatory reforms as chief of staff for the Office of Information and Regulatory Affairs, a division of OMB.

“The president is demonstrating that regulatory reform in the Trump administration isn’t just about dollars and cents; it is also about securing liberty through the continued advancement of good government principles like fair notice, transparency, accountability, and decision-making grounded in analysis,” Campou added.

Parts this post were first seen at Flag and Cross.