Pres. Trump’s Afghanistan Speech: The Difference Is The Man 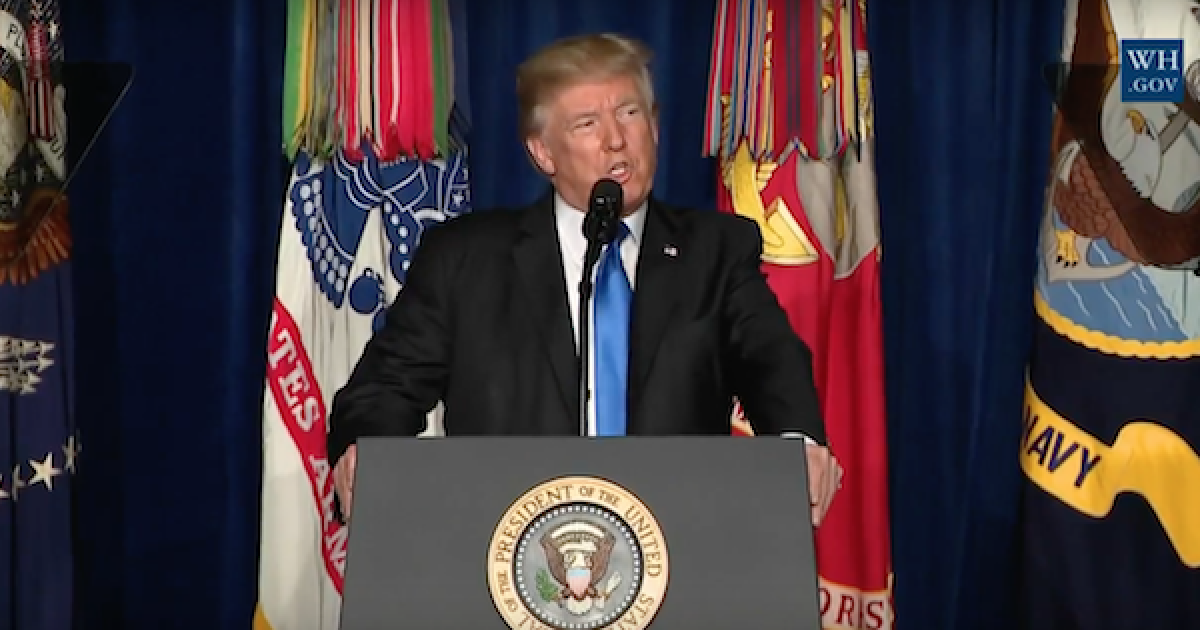 Trump had a line in his Afghanistan policy speech Monday night that will no doubt be magnified and held up to scorn (or at least sarcasm) by his critics.  (Video below.)

In the prelude to outlining his new strategy, Trump acknowledged that his earlier instinct was to pull out of Afghanistan.  The media have been busy for the last couple of days publishing tallies of Trump’s previous comments on the campaign there, and the number of times he criticized our Afghanistan operations and/or said we should get out.

That’s all fair enough.  He said what he said, and his critics are entitled to their sniping.

But there’s a more important meaning to the line he uttered, even if it’s an unintentional one.  Before going on to outline a policy that has us putting 4,000 more troops in Afghanistan, and continuing to train Afghan forces to take over security for their own country, Trump said this:

All my life, I’ve heard that decisions are much different when you sit behind the desk in the Oval Office.

The obvious interpretation is that Trump changed his mind when he learned more about making the decision.  And for what it’s worth, I think that’s what he actually meant by this statement.

But there’s a more illuminating interpretation, and it’s a better one here.  It involves a simple shift in emphasis.

Trump now has control over aspects of the Afghanistan policy that he had no control over when he was criticizing it earlier.  He may have been unable to endorse remaining in Afghanistan at a time when our policy was barely hanging on in terms of its execution.  The conditions of execution were set by Obama, and they entailed the deliberate placing of major obstacles like refusing to have a concept of victory and mandating rules of engagement that rendered our forces both vulnerable and largely ineffective.

At a time when Trump couldn’t affect those important conditions, it made sense for him to withhold support for continued operations under those conditions.

But now Trump is the one with the authority to reset the conditions of execution.  And on Monday night, he made clear that that’s what he is going to do.  He’s going to authorize more robust rules of engagement; he’s going to emphasize taking the fight to the terrorists and helping the Afghan forces take back their territory; he’s going to take a firmer line on Pakistan’s accommodation of (even cover support for) the Taliban, which has been a major vulnerability in the whole situation for years; he’s not going to proclaim schedules and calendar dates for the Taliban to wait out; and he’s not going to tie our forces’ hands by saddling them with untimely, incongruous forms of “nation-building” in active war zones.

We can expect to see a flurry of opinion pieces this week on how Trump’s decision is a triumph over the now-departed Steve Bannon and his preference for pulling American forces back from forward engagements.

But what it’s really about is a different president being the difference in how the Afghan problem is scoped and approached.

As to the “Swamp-versus-Bannon” dynamic (which, while real, has been overblown and distorted by the media), it’s clear from what Trump said tonight that Mattis and McMaster didn’t advise him to continue operating in Afghanistan the way Obama did.  That’s not what’s going on here.  For that matter, they didn’t advise him to operate the way George W. Bush did in Afghanistan, at least after the first couple of years.

And Trump is not going to operate that way.  It remains to be seen how well a change in execution policy will work.  But Trump’s decision to take a different approach will be key to seeing a different result.

A policy doesn’t just execute itself, nor does military force work by rote, like turning on a machine.  Good policy and sound strategy are necessary, but they are not sufficient.  All military policy stands or falls in execution, and the president’s approach to setting the conditions of execution is critical.

Trump has just made a set of decisions that transcends the argument’s old framework.  By planning to change the conditions of execution, he has changed the proposition in Afghanistan.

This is exactly what is needed for our posture vis-à-vis Iran, which will be the real test of Trump’s ability to prevail over the “Swamp.”  But in the meantime, Trump has made a decision that does the opposite of what many critics will claim.  It puts him in the driver’s seat, and it meaningfully changes what we’ll be doing in Afghanistan.  On the level of national security policy, Trump has done the only thing that could possibly turn years of stagnation into geopolitical success, not only in Afghanistan but in our larger policies on Asia and international terrorism.  There is no guarantee of success — but not doing what Trump has outlined has so far guaranteed against it.

On the level of domestic politics, I wouldn’t despair of his ability to make Afghanistan a non-issue for 2020, even for the die-hard non-interventionists in his voting base – by posting successes there rather than merely stringing along failure.