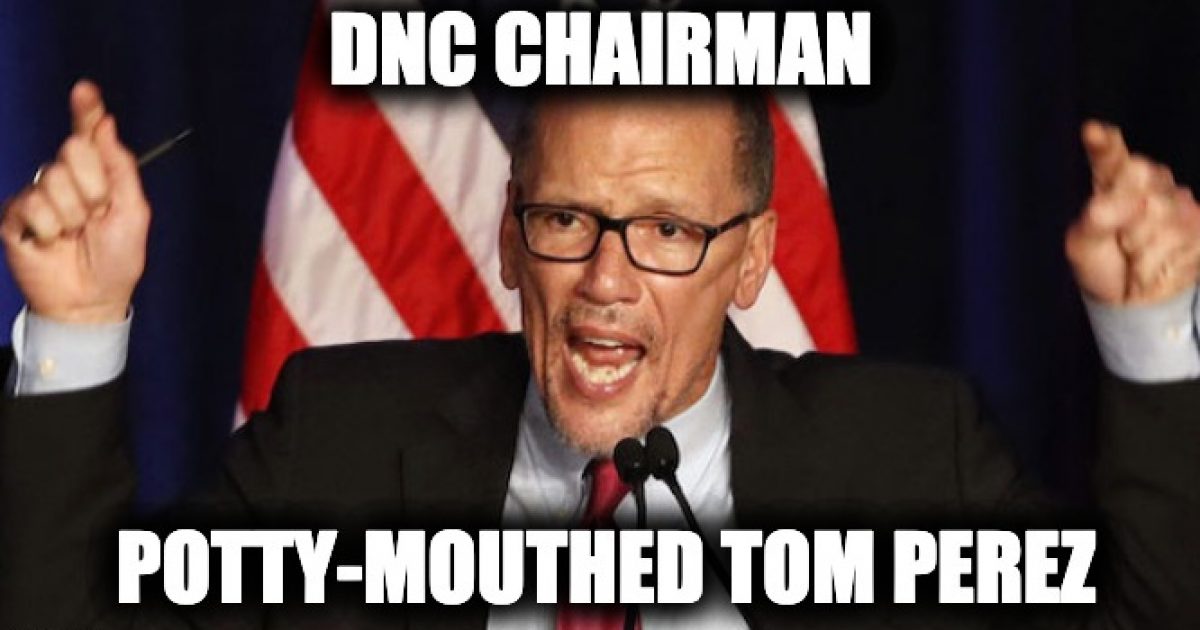 With the Democratic National Committee (DNC) struggling to raise money, the DNC Chairman, Potty-mouthed  Tom Perez is taking his act south of the border, announcing plans to hold multiple fundraisers in Mexico City this September.

According to Bloomberg, the three fundraisers scheduled for the 28th will range from a student-centric event with a $25 minimum entry fee to a dinner where tickets could go as high as $15,000.

Perez’s tenure as the Chairman of the Democratic Party has been controversial. First, he was criticized for his frequent use of cuss words in his Party Unity Tour speeches. Then he got knocked by his own party for doing a lousy job of fundraising, a primary responsibility of a party chair. Under Perez’s leadership, the DNC has consistently lagged far behind its Republican counterpart in raising funds. In June, the DNC raised $8.5 million to the RNC’s $20.7. But the DNC Chairman has led the political world in dropping “F” bombs while speaking to large crowds.

Chairwoman Ronna McDaniel reports that the Republicans also broke a record in July.

“Our fundraising success is further evidence that the American people like the pro-growth agenda and economic record that the Trump Administration and Republicans continue to deliver,” McDaniel said.

Meanwhile, the Democrats have to travel to the heart of Mexico to try and raise funds.

Scoop: DNC Chair Tom Perez will travel to Mexico City for three events to raise money from Americans abroad, from a $25-minimum happy hour to a $1,000-$15,000 dinner.

There are currently 1.5 million American citizens residing in Mexico, according to the State Department.

No Chance of Illegality

We know what you’re thinking: Is there any chance for illegal donations to filter through? It is, after all, illegal for foreigners to contribute to American political campaigns – but the DNC has it covered.

According to Bloomberg, “The registration form on the DNC website require [sic] that attendees be U.S. citizens or permanent residents and enter passport or green card numbers.”

In other words, they’re going to have to prove they’re American citizens. But WAIT! Don’t the Democrats say that asking for that kind of proof, especially from Mexicans is racist!

Hillary to the Rescue

Aside from fundraising in Mexico, the DNC is seeking other desperate alternatives to kickstart donations. Politico notes that Hillary Clinton will be hosting an event in Washington, D.C. this October where participants can contribute at different levels ranging from $15,000 to $50,000.

But who exactly does the DNC think will pay that kind of money to have dinner and a conversation with Hillary, whose star has been on the decline? Just this past year, a speaking tour with her and her ex-president hubby saw ticket prices drop to single digits, while a Broadway play about Hillary’s election failure was canceled after seeing deplorable ticket sales.

Perez also sought support from Democrats in London in April of 2018. It’s surprising to see a party allegedly so consumed with the specter of foreign influence on elections in American elections travel to Mexico to fund their campaigns.