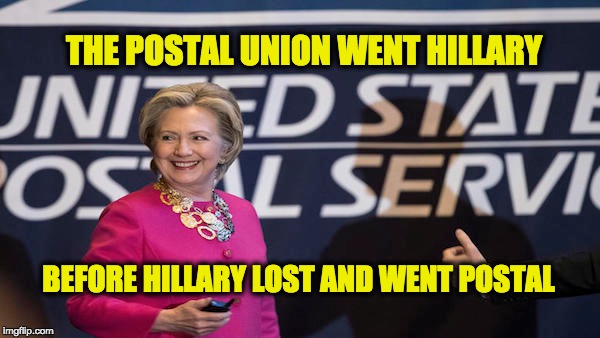 Shhh, I think this is supposed to be a secret.  Yesterday the Washington Post posted a story about a senate hearing that revealed that during the 2016 presidential campaign the USPS broke law by giving time off for postal workers to campaign for Clinton, but if you watched the mainstream media news you would never know about it.

High-level postal officials had for years granted employees’ requests for unpaid leave, leading last year to an “institutional bias” in favor of Clinton and other Democrats endorsed by the National Association of Letter Carriers, one of the largest postal unions. The Postal Service’s Office of Special Counsel and inspector general found that the agency violated the Hatch Act, which restricts federal employees from working for or against a political candidate or party during election season.

“The culture and practice was, ‘It’s mandatory, it’s the directive’ ” to ensure employees got time off, Adam Miles, acting director of the Office of Special Counsel, told Senate lawmakers at a hearing.

The investigation found that 97 letter carriers took time off, sometimes weeks, to take part in the union’s Labor 2016 program, canvassing, making phone calls and working on other get-out-the-vote efforts to help elect Clinton and other pro-labor candidates. The workers were dispatched to battleground states, including Florida, Wisconsin, Pennsylvania and Ohio. They were reimbursed for their unpaid leave by the union’s political action committee.

The way it worked is that the Post Office would get a letter from the union telling them who they wanted to use, and the local managers were supposed to comply. If the local post office managers didn’t want to grant the free time, upper management told them to do it anyway.

The time-off-to-campaign-at-any-cost practice was brought to lawmakers’ attention by a letter carrier in Wisconsin, who testified that the absence on short notice of multiple employees at his post office and those in nearby towns left them short-staffed and paying out overtime to the workers who stayed behind. One letter carrier was gone five weeks.

The local post office manager pushed back and tried to deny the time-off requests, the letter carrier, Timm Kopp, testified Wednesday, but was rebuffed by upper management.

“I know it’s true that historically the Democrat Party has been the party to help the Postal Service,” Kopp told lawmakers, “but these partisan acts will not help, only hinder its efforts.”

Now this is a major violation of federal law, which according to the inspector general has been going on for the past three administrations without being reported. One would think that it would be covered by that evening’s news.

According to Newsbusters Fox News reported the story during its evening news but:

…the disturbing nature of these federal violations by a federal entity were not enough to stir the Big Three Networks (ABC, CBS, and NBC) and Spanish-language networks Univision and Telemundo to action. But CBS did find the time to run a two minute and eight-second report on how Jurassic Park got the speed of the T-Rex completely wrong. A mailman can out run the T-Rex apparently, but they can’t out run congressional oversight.

And a scandal which most recently involved the Democratic Party can outrun the mainstream media news. It is not known when Mr. Kopp the postal carrier who told Congress about the postal service and the Clinton campaign will be found dead of an apparent suicide