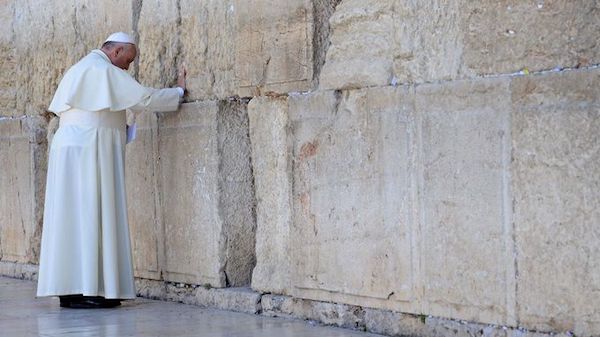 In a historic move, Pope Francis said, “anyone who does not recognize the Jewish people and the State of Israel — and their right to exist — is guilty of Antisemitism.” He also clarified what he said to Palestinian President Abbas. Pope Francis didn’t say that Abbas is an angel of peace, the Pope gave a wish that he might become an angel of peace in the future.

Pope Francis wrote these words in an email to Portuguese-Israeli Journalist Henrique Cymerman and Rabbi Avraham Skorka. These two men have had close relationships with the Pontiff, who approached the Pope after his recent meeting the Palestinian head, where the Vatican recognized a Palestinian state.

The Times of Israel reported on Thursday:

In comments made to veteran Portuguese-Israeli journalist Henrique Cymerman Thursday, Francis was quoted as saying that “anyone who does not recognize the Jewish people and the State of Israel — and their right to exist — is guilty of Antisemitism.” …

The pope recalled telling Abbas in Italian that he hopes the Palestinian chief might one day become an angel of peace in the future, according to Cymerman — although ostensibly he has not yet reached that level.

The comments were sent by the Pope in writing to Cymerman along with Argentine Rabbi Abraham Skorka, one of Francis’s close interfaith colleagues, after the duo approached him following his meeting with Abbas, Channel 2 reported.

In an email we got from Pope Francis:”Whoever does not recognize the Jewish People and the State of Israel falls in antisemitism”

The clarification of the Pope’s “angel of peace” comment corrects false reports made by the mainstream media after his meeting with Abbas. Vatican spokesman Father Federico Lombardi explained what happened:

Lombardi said that Francis often presents visiting leaders with the large round bronze medallion representing an angel of peace in order to encourage a commitment to peace. “When the pope presents the medal to the president or head of state, he offers a few words of explanation of the gift as well as an invitation to a commitment to peace on the part of the recipient,” Lombardi said. “Each one of us must be for others and for the world an ‘angel of peace.’” ” The word angel in this context, said Lombardi, means messenger.

The Pope’s statement is part of the growing tide of declarations from world leaders that belligerence toward Israel and denying that she has the right to exist as a Jewish state is an act of Antisemitism.

While giving a speech to the Israeli Knesset last year, Canadian Prime Minister Stephen Harper stated that attacks on Israel are a “mutation of the old disease of Antisemitism.” French Foreign Minister Manuel Valls, then the country’s Interior Minister, said last year, “Criticism of Israel that is based on anti-Zionism — that’s Antisemitism today, this is the refuge of those who do not accept the State of Israel.”

Even President Obama has moved in this direction. In a recent interview with one of his “go-to Jews,” the Atlantic’s Jeffrey Goldberg, Obama said:

While the Anti-Zionism=Antisemitism statements of those national leaders are crucially important, the declaration by the Pontiff is the first recognition by a world-wide religious leader that you can’t align against the rights and moral aspirations of the Jewish people and claim to be shocked when you’re accused of Antisemitism.