Trip To The Holy Land, Where The Pope Went Wrong 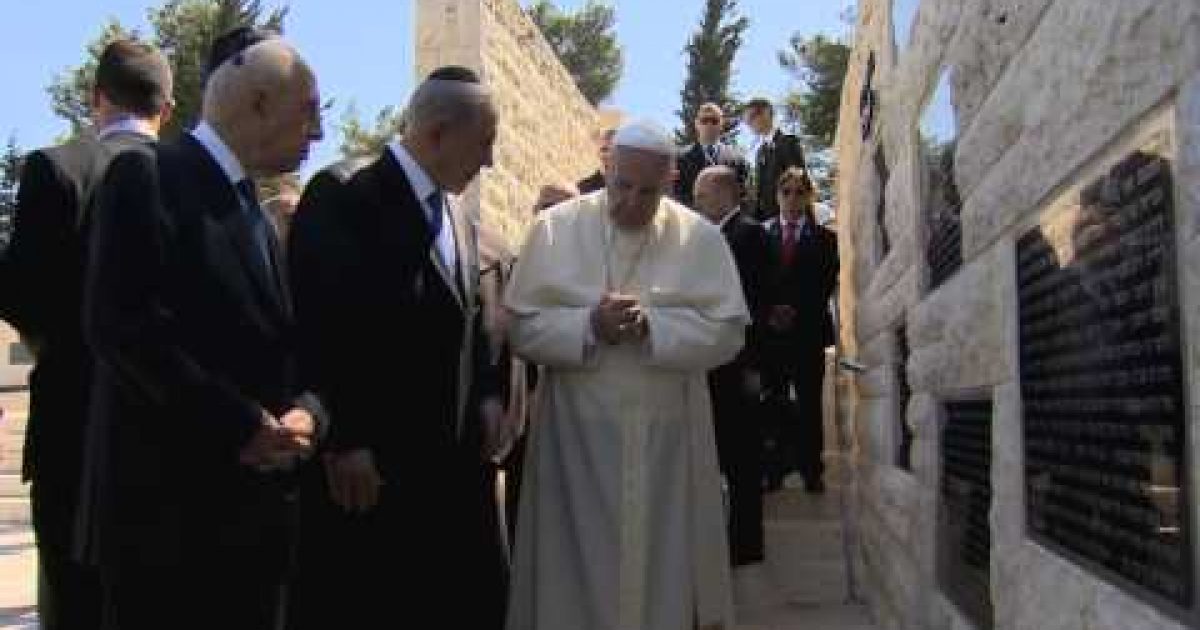 It was like a shot heard round the world—the leader of the Catholic Church was visiting Bethlehem Sunday prayed at the separation barrier built by Israel to prevent terrorists from killing Israelis. The supposedly impromptu prayer brought cheers from the Palestinians and propagandists who call the fence an apartheid fence.

The Pope made this gesture despite the fact that the wall has saved lives. According to statistics published by the Israeli Ministry of Foreign Affairs and the Israel Security Agency, from the beginning of the Second Intifada until the construction of the “first continuous segment” of the barrier in July 2003, 73 Palestinian suicide bombings were carried out from the West Bank, killing 293 Israelis and injuring over 1,900. However, between August 2003 and the end of 2006, only 12 attacks were carried out based in the West Bank, killing 64 Israelis and wounding 445. The trend continued into 2007,and 2008 as well. The numbers of fatalities due to terror attacks have continued to decline since 2002, from 452 in 2002 to 9 in 2010.

So whether he meant it or not, Pope Francis’ prayer by the wall became a propaganda tool for the Palestinians, and it was the equivalent of spitting on the graves of Israeli citizens blown to bits by terrorists.

Sunday’s unscheduled prayer had the extreme weight of symbolic imagery. Israeli guards watched from a fortified guard tower overhead as the Pontiff stepped down from hisPopemobile and made his way to what some say is the most photographed section of the Wall. He stopped at a panel spray-painted, in black, “Pope we need some 1 to speak about Justice Bethlehem look like Warsaw ghetto” and, in red paint, “Free Palestine.” He bowed his head in silent prayer, laid his palm against the wall, and before leaving touched his forehead to it.

Later the Pope’s friend Rabbi Abraham Skorka who traveled with him to the holy land told Army Radio that in that moment Pope Francis prayed for peace so the wall could be dismantled. But the message the Palestinians and media took away was much different; Jews should not defend themselves by keeping terrorists out.

Also on Sunday, Pope Francis extended an invitation to the leaders of Israel and the Palestinian Authority to travel to the Vatican to pray for peace with him:

In this, the birthplace of the Prince of Peace, I wish to invite you, President Mahmoud Abbas, together with Israeli President Shimon Peres, to join me in heartfelt prayer to God for the gift of peace. I offer my home in the Vatican as a place for this encounter of prayer.

The visit is scheduled for the day after Shavuot, which in Israel is June 5th, but don’t expect anything to come out of it. The President of Israel is a ceremonial head of state position with no authority to make peace, a fact I’m sure Netanyahu pointed out the Vatican. Truth be told, I have only slightly less authority to negotiate peace than Peres does (after all he is an Israeli citizen, I am not).

And before people start saying inviting Peres was a slam at Bibi, understand the Pope had to invite Peres because from a protocol point of view Peres and Abbas are on the same level. The Vatican visit will be a very pretty photo-op but nothing more. In the end, Peres doesn’t have the power and Abbas doesn’t have the desire.

After spending Sunday with Palestinian President Abbas, the Pope spent Monday with his Israeli hosts. At Netanyahu’s urging the Pope made one more spontaneous stop, a memorial to victims of terror at the Mt. Herzl Military cemetery. The barrier he told the pontiff, is to prevent such deaths, many of which had occurred from suicide bombs.

“The security barrier has saved thousands of lives,” Netanyahu said. The Prime Minister pointed out the name on the wall of a 10-year old victim who had been his son’s best friend.

My son was ten years old. His best friend was a girl, a beautiful Ethiopian girl. She sat next to him in class. One day she did not come. She was blown up in a bus not far from here, because there was no fence, no wall.

The pope listened to him and uttered a short prayer.

The Pope then walked over to the wall, and touched it, exactly as he had touched the barrier.

It was a beautiful message that neither the Palestinians nor the international media would absorb, they were too busy celebrating the Pope’s gesture from the day before.

And in a way maybe they shouldn’t absorb it. By praying at the security fence, and doing the same thing at the memorial to victims of terror, the Pope was drawing a false moral equivalence between blowing up ten-year-old children and finding a non-violent solution to stopping the terror.

Pope Francis is a moral and good man, but during his visit proved himself to be less than fully informed and made a grave error in Bethlehem. At least I would like to believe it was an error and that the Pope wasn’t purposely sending a message to the Palestinians that walls preventing murder are bad. But in the end that was the message he sent.