Mike Pompeo Slams John Kerry, “It’s Time To Get Off The Stage!” 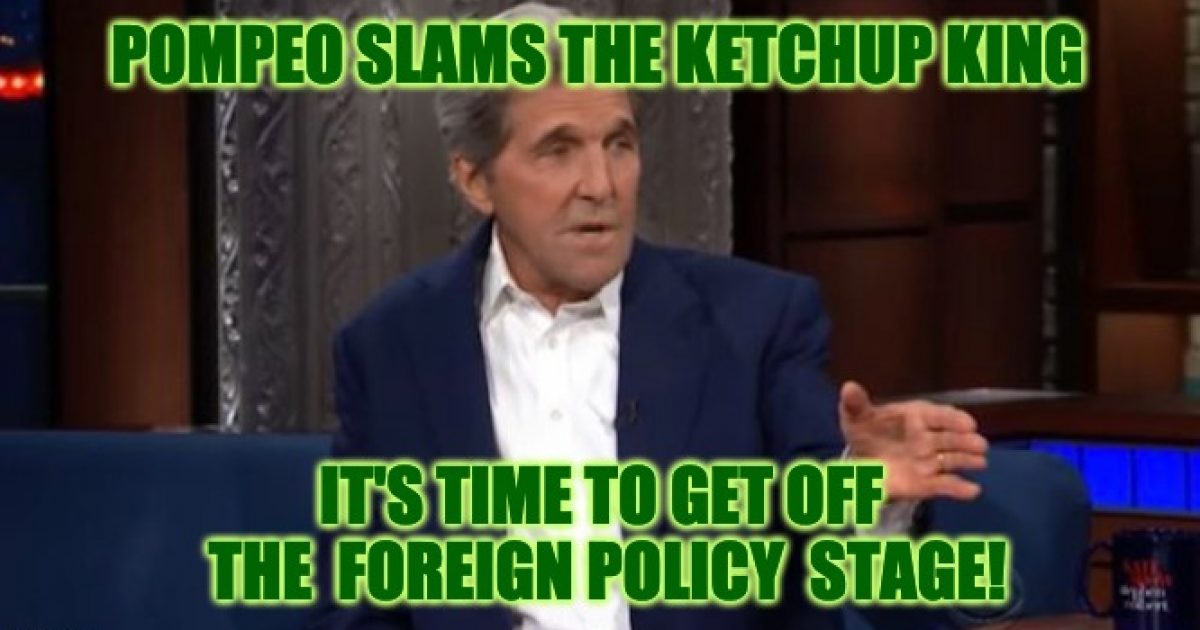 As tensions between America and Iran increase, Secretary of State Mike Pompeo has grown tired of John Kerry trying to butt into, and obstruct the Trump Administration foreign policy. Pompeo was on the Fox Radio Guy Benson show Friday and let Kerry have it.

Secretary of State Mike Pompeo slammed his predecessor John Kerry, telling him “it’s time to get off the stage” and stop inappropriately engaging with foreign leaders while undermining the Trump administration’s foreign policy.

Pompeo made the comments in a Fox News Radio interview with Guy Benson on Thursday amid the increasing tensions between the U.S. and Iran, and the calls to investigate Kerry, the former secretary of state under President Obama, over the alleged violations of the Logan Act for meeting with Iranian officials.

(…) “It is a historical and completely unhelpful when previous secretaries of state are continuing to engage in the tasks that they engaged in when they were the secretary of state,” Pompeo said. “I’ll leave it at that in the sense of it’s time to get off the stage for the previous administration.”

A correction to the Fox explanation Kerry may be alleged to have violated the Logan Act, but any look at the facts confirms that he did break the Logan act.

During interviews to promote his new book this past September Kerry told an interviewer that he has met with Iranian Foreign Minister Javad Zarif three or four times since leaving his Foggy Bottom office. Kerry explained that their talks touched on the international nuclear agreement which Kerry negotiated and President Trump withdrew from because it was such a bad deal or America. That was the first time Kerry admitted his interference with America’s Iran policies, but in May of 2018, the Boston Globe reported that he had been secretly meeting with the Iranian foreign minister and European leaders, advising them on how to save the flawed JCPOA.

Pompeo went on to accuse Kerry of advising to the Iranians that the best course of action is to wait out the current administration, calling it “unheard of.”

“I understand they have different views than we have, they are entitled to those views. But talking with senior leaders around the world and suggesting to them somehow that waiting out this administration is the best course of action for those countries is something that is unheard of,” he said.

“It is fundamentally different than any previous administration has undertaken and they ought to leave the foreign policy to us,” he added.

It has also been reported that Kerry told Palestinian President Abbas to wait out the Trump Administration, stating that Trump would be out of office within one year.

In recent weeks President Trump accused Kerry of violating the Logan Act, and Florida Senator Marco Rubio asked attorney general Barr to investigate whether or not the former secretary of state who married into ketchup royalty violated the Act. Sadly even if there are formal charges against Mr. Long-face, the track record of enforcing the Logan Act is not good. In the 220 years since the Logan Act was signed into law, only two people have ever been indicted on charges of violating the Act. Francis Flournoy in 1803 and Jonas P. Levy in 1852. Neither one was convicted.

To listen to the Guy Benson show M-F from 6-8, Click Here.

Inspiration from a Vietnam War Veteran: “You must never confuse faith that you will prevail in the end…”
March 2nd, 2021 Sons of Liberty Media