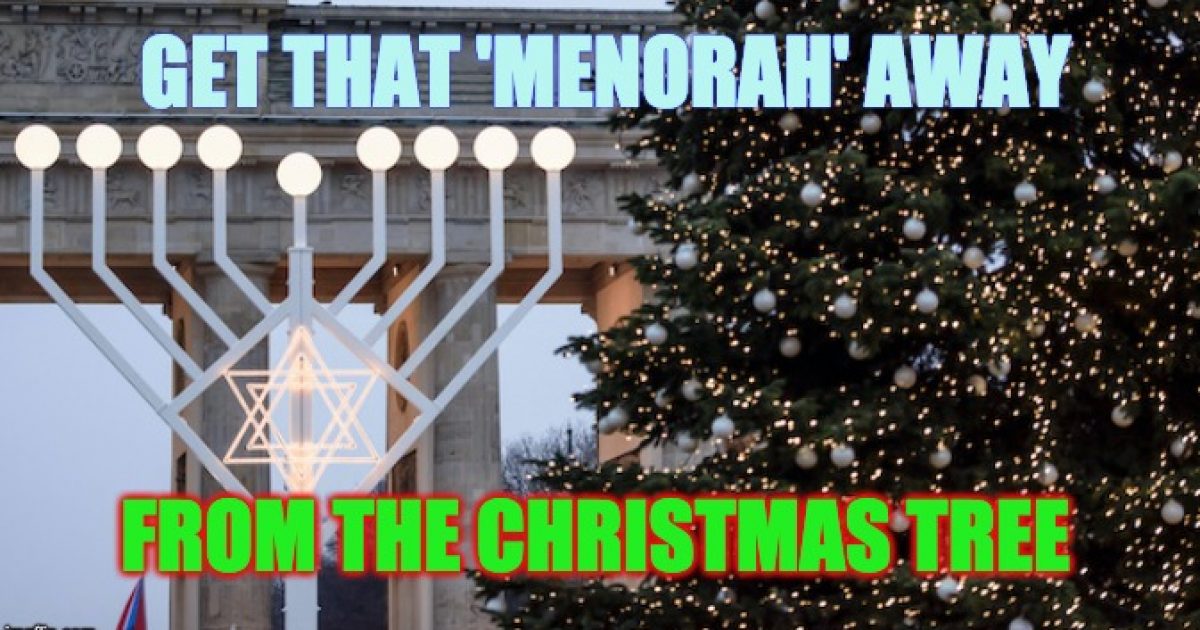 It happens every year at this time, the stupid politically correct holiday season. When a community puts up a Christmas tree, one of three things happens. Either there is a battle to take it down, rename it a ‘Holiday’ Tree or someone fights to get a Chanukkiyah (that’s its real name, not Menorah), Kwanzaa candles, or a symbol of some other religion’s holiday placed right next to it. Then the ACLU starts suing any town whose mayor even drove near a church, mosque, and/or synagogue, put up a tree in their town square or enjoyed a cup of egg nog.

Give it up liberals! America is a majority Christian country. The First Amendment isn’t supposed to stop Christians from celebrating their faith, it’s supposed to stop the majority from crapping on the other religions. And putting a Christmas tree in a town square does not hurt other beliefs. In fact, putting a Chanukiah next to a Christmas tree ruins the meaning of Hanukah

The idiocy is starting early this year.  In Wisconsin this year, the huge decorated evergreen put in the Capitol rotunda in November will not be a Christmas Tree, but a “holiday” tree per Governor Evers. Well, Governor, what holiday is the tree celebrating?

In Portsmith, New Hampshire  Leaders at the UNH & Seacoast Chabad Jewish Center requested that a 9-foot ‘menorah” be placed in Portsmouth’s Market Square during the eight days of Hanukkah this December (22nd-30th), which goes against the meaning of the holiday. In the nearby town of Durham, NH:

The Durham town council finds anything having to do with Christmas as too distracting. It has now banned the annual “holiday tree” lighting ceremony as well as Santa Claus’ grand entrance. Oh, the “holiday” tree will still be lit, but under the cover of darkness. And Santa might as well be the impeachment whistleblower. He will apparently just appear out of thin air, rather than be introduced. The council has also banished the wreaths that used to be displayed on town light poles. Why no wreaths? The council worries that they may be construed as being too close an association with Christmas. Oh, the horror.

Next year, explained town manager Todd Selig, the council will look to hang something from the poles — like a “non-descript star” — to “add light and festivus” to the season.

Last year Durham received a request from the Chabad to put a  Chanukiah next to their tree. They said no, that’s why they turned to “Festivus.’ And Portsmith probably won’t be far behind in celebrating Festivus.

Stop it!!! Chanukah is not the Jewish Christmas

It makes me crazy. People who see December as an opportune time for the celebration of politically correct multicultural nonsense have to stop! I understand that they are trying to be fair, but it’s idiotic and ruins the meaning of my holiday, Hanukkah (note Hanukah has many spellings, and I try to use them all). Even the Jewish organizations trying to push for a Chanukiah next to every Christmas tree do not comprehend the full meaning of Hanukkah.

Only one part of the story was the Maccabees fight for getting the Syrian-Greeks out of Israel, and the cleansing and dedication of the Temple. The Hanukkah Story about a civil war amongst the Jews. Judah Maccabee and the boys were fighting other Jews who had turned away from their faith by combining it with Greek/Hellenistic practices. The resulting assimilation caused a loss of Jewish faith and tradition, and eventually, the Hellenists laws against practicing Jewish rituals.

Let me suggest that if Matthias and his sons were alive today, they would be fighting every Jew who wanted a nine-foot menorah next to a Christmas tree, a star of David next to a cross, or even the massive multi-holiday Christmas, Chanukah, Kwanzaa, Festivus and Winter Solstice display.

I would also suggest that all Jewish people who celebrate both holidays “have a Christmas Tree for the kids,” a Hanukkah Bush, or talk about Hanukkah Harry are also missing the meaning of Chanukah. The Maccabees were horrified when an idol was placed in the holy Temple. Rather than trying to fit with “modern” culture, they wanted to make sure that the House of God was a Jewish household. To remember the Maccabees, we should do the same with ours.

As Jewish holidays go, Chanukah is among the least important, unlike the big ones–holidays” like Passover, Sukkot, or Shavuot, which were ordained in the Torah, on Hanukah which was created by Rabbis, you can work, drive, etc.

America is not supposed to be a melting-pot its more like a gumbo where all the elements are in the same pot, existing together, but maintaining its original form. As Americans, we are all different, and we must celebrate those differences, not merge them into one hodgepodge of progressive mediocrity celebrating everything at the same time because that is celebrating absolutely nothing.

The Rabbis tell us that we are not to use the Chanukah candles for reading or seeing, as we would with a regular candle or a light bulb. The Chanukkiyah is supposed to be placed near a window, so the light of God and his miracles will shine outward into the world. Mixing up Chanukah with other people’s traditions diminishes the light and message of Chanukah as well as those different traditions.

And to my Christian friends: Please don’t go get assimilated on me either. That tree in the mall, town square, or your living room is a Christmas tree, not a holiday tree. Santa is not a secular character; he is Saint Nick. You have a beautiful tradition. “Keep the Christ in Christmas.” Don’t try to make it politically correct by taking away its religious nature. And don’t take away the sacred nature of Hanukkah by shoving it down the collective throats of public Christmas displays.

America is a great country. It is great not because everyone celebrates the same, but because we can all celebrate our differences.