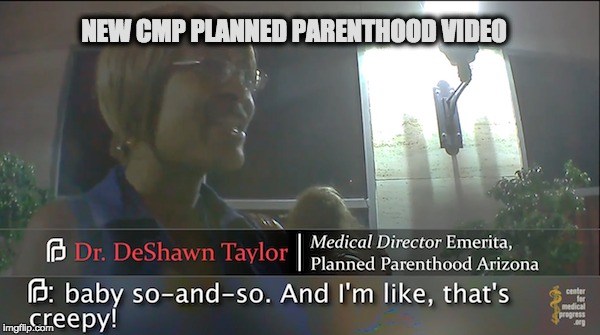 Perhaps as a reaction to being unfairly indicted in California CMP, the Center for Medical Progress released another undercover video reveling the truth about Planned Parenthood. In this video,Dr. DeShawn Taylor, who was Medical Director of Planned Parenthood of Arizona and previously an abortionist at Planned Parenthood Los Angeles,  describing how to deliver intact fetuses to harvest high-quality body parts, and what she does if the fetus is removed and still shows “signs of life.”

Dr. Taylor confirms she does elective abortions on healthy fetuses and pregnant women up to 24 weeks. When the investigators ask her about obtaining intact fetal organs. Taylor said its hard on her staff,

But it IS a baby!

“We have the people who do our paperwork for the fetal death certificates, they email us calling them ‘babies’. Baby this, baby that, baby so-and-so, and I’m like, that’s creepy!”

Well you can’t call them puppies, because if they were puppies, people would allow you to kill them.  They are babies, human babies, so liberals only see them as a bunch of cells.

Dr. Taylor explains to the investigators, “In Arizona, if the fetus comes out with any signs of life, we’re supposed to transport it. To the hospital.” When one investigator then asks, “Is there any standard procedure for verifying signs of of life?” Dr. Taylor replies, “Well, the thing is, I mean the key is, you need to pay attention to who’s in the room, right?”

Dr. Taylor then laughs as she repeats what the Arizona law requires, and says, “It’s a mess. It’s a mess.”

Dr. Taylor acknowledges that the feticidal chemical digoxin cannot be used in an abortion where fetal body parts will be harvested for sale, but she remarks that in a standard dismemberment dilation and evacuation abortion, “My biceps appreciate when the dig[oxin] works,” to kill the fetus before the procedure. “I remember when I was a [Family Planning] Fellow and I was training, I was like, Oh, I have to hit the gym for this,” she says, describing the force she feels in her biceps when performing a dismemberment abortion with forceps.

Gee, too bad her college had a football team, and basketball team, but didn’t have a killing babies team, her arms would be in better shape. Watch the video below: