This Is The Use Of Public Dollars To Restock A Major Democrat Election Slush Fund. 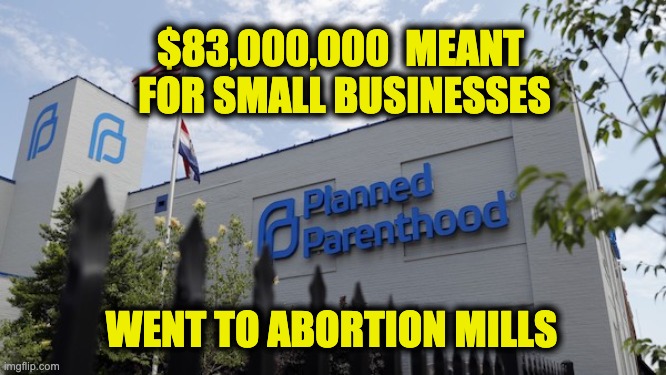 Why did Pelosi fight so hard to block smaller Trump-era bailouts that carefully targeted small businesses? Maybe because it didn’t include money for Planned Parenthood.  The Democrats wanted a massively bloated ‘bailout’ plan that could serve as a slush fund to reward all of their favorite special interest groups and prop up financially failing Democrat states and cities with the public purse.

And fewer groups are more beloved to the Democrats than Planned Parenthood, who — mysteriously — managed to rake in some $83 Million in taxpayer dollars despite being specifically ineligible for receiving any of this bailout money.

That’s $83M that could have gone a long way to rescuing, heaven alone knows how many, family businesses from financial ruin, not because they were running a bad business plan, but because the government forbade them from operating during the pandemic.

Fed up with Planned Parenthood affiliates continuing to receive coronavirus stimulus money “illegally,” several Senate Republicans, including Minority Leader Mitch McConnell, are demanding an investigation into why the Small Business Administration continues to write checks to the outfit.

In a letter to SBA Administrator Isabel Guzman, 25 GOP senators said that the affiliates have received $83 million and apparently continue to get money through the Paycheck Protection Program when the rules state they are ineligible.

What’s more, it said that the SBA is providing PPP money even after telling Planned Parenthood affiliates that they were not eligible for the money and demanded that it be returned. Only 7 of 38 affiliates have complied.

“It is unconscionable that SBA continues to approve PPP loans made to organizations which are clearly ineligible for funding,” read the letter about the money going to the women’s health and abortion clinics. “This is unacceptable,” it added in calling for an investigation into why the money continues to be provided.

If you’re wondering how in the hell Planned Parenthood managed to rake in tens of millions in funding they were specifically excluded from receiving, maybe this story will shed a little light on what’s really going on.

Planned Parenthood will spend $45 million on the 2020 elections, the nonprofit’s biggest electoral expenditure in its history, according to CBS News.

The money will go toward the presidential election as well as congressional and state House races, according to Planned Parenthood Votes Executive Director Jenny Lawson, who told CBS, “The stakes have never been higher.”

The Trump administration, she told CBS, “has managed to undo so much over the last three years … the fact that this summer the Supreme Court might gut Roe v. Wade is an indicator of their intention and they’ve never been so bold.”

The campaign will zero-in on nine states: Arizona, Colorado, Florida, Michigan, Minnesota, New Hampshire, North Carolina, Pennsylvania and Wisconsin, according to the network. The money will go into digital, TV and radio ads, canvassing, and mailers, according to CBS.

This isn’t helping meet medical needs in a COVID era. Not at all. This is the use of public dollars to restock a major Democrat election slush fund.