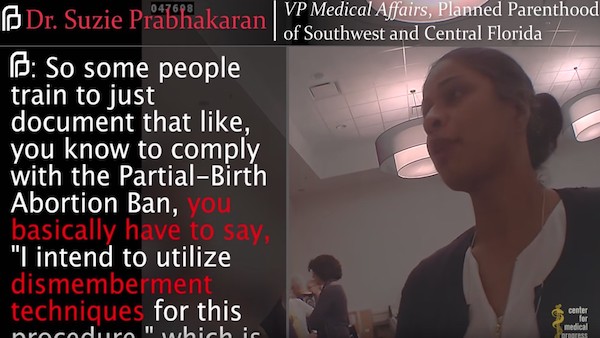 Dr. Prabhakaran, or the 2nd coming of Josef Mengele, explains how Planned Parenthood allows their doctors to lie to the government in an effort to get around the onerous rules put in place to respect the bodies of dead babies.

(Is it crazy that the government is okay with murdering the kids, but they’re not okay with selling their body parts? It’s crazy, right?)

From the Center for Medical Progress:

Prabhakaran discusses how Planned Parenthood allows their abortion doctors to certify compliance with the federal Partial-Birth Abortion Ban, which prohibits abortions in which a fetus is extracted alive up to certain anatomical landmarks (18 U.S.C. 1531).

According to Prabhakaran, Planned Parenthood abortion doctors can certify compliance with the law by using a feticide like digoxin to kill the fetus before the abortion, or they can simply “document” their “intent” to do a “dismemberment” abortion where the fetus is pulled apart with forceps rather than extracted intact.

Prabhakaran indicates she never uses digoxin to kill the fetus before the abortion, and relies entirely on the “checkbox” to “document” her intent in the abortion to certify compliance with the federal law: “I’m not doing digoxin, and we’re just going to document and there’s never been a problem.”

“The Federal [Partial-Birth] Abortion Ban is a law, and laws are up to interpretation. So there are some people who interpret it as it’s intent. So if I say on Day 1 I do not intend to do this, what ultimately happens doesn’t matter.”

Center for Medical Progress director David Daleiden explains that at Planned Parenthood everyone seems trained on just what they need to do to “skirt” our nation’s laws while maintaining an air of plausible deniability for the organization itself.

“Planned Parenthood medical directors and abortion doctors feign compliance with the federal partial-birth abortion law on paper, knowing full well that ‘what ultimately happens doesn’t matter’ so long as no one is scrutinizing what they actually do to women and children in the operating room. And the fact that Planned Parenthood has a ‘dismemberment’ ‘checkbox’ on their abortion forms should tell the public and policymakers everything they need to know about this barbaric abortion business. The Department of Justice should open an immediate investigation into Planned Parenthood’s late-term abortion practices, and the U.S. Congress must stop forcing taxpayers to subsidize Planned Parenthood’s brutal abortion empire.”

Basically, Planned Parenthood is one monstrous criminal organization that is constantly searching for new and better ways to surreptitiously break our laws, all while enacting the most terrible genocide our planet has ever seen.

The law breaking would be disgusting, if not for the fact that the organization was already doing something vastly more disturbing – murdering almost 1 million children around the planet every year. Honestly, who cares what laws they break once you realize that they’re murdering children and most of America doesn’t even care?

We live in a sad, sick world.

Video was originally seen at LidsVids.com