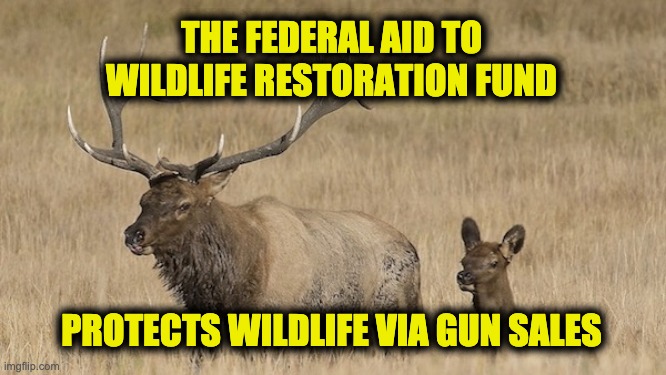 The Nevada Current this week noted something many Americans may not realize about wildlife conservation programs in the United States. “Taxpayers contribute only about two percent of the Department of Wildlife’s budget via the state’s general fund,” the newspaper accurately reported, while noting that “hunters and gun enthusiasts almost exclusively pay the tab for managing the state’s vast array of species.” “Pittman-Robertson Fund

Since the late 1930s, a program generically referred to as the “Pittman-Robertson Fund,” or by its formal name, the Federal Aid to Wildlife Restoration program has raised billions of dollars from special excise taxes on firearms and ammunition, and related products. All of this money is managed by the U.S. Fish & Wildlife Service and annually apportioned to the states to support their state-level wildlife management programs. The taxes are paid by manufacturers (10 percent on handguns and 11 percent on long guns), so like it or not, every time a citizen purchases an AR-15, also known as a modern sporting rifle, or some other firearm not popular with anti-gunners, that purchase goes to support wildlife.

As noted by the Nevada Current, “Animal activists and some conservationists argue only a fraction of firearms and ammo are used for hunting. People who purchase firearms for protection or target practice, they say, are subsidizing efforts aimed at appeasing hunters…But the Pittman-Robertson funds are tied to hunting licenses.”

According to the most recent data available from USFWS, during the last budget year, the federal agency apportioned a whopping $678,894,449 to the states.

So, what? If target shooters, including those who shoot trap and skeet, or participate in Sporting Clays, and competitors in 3-Gun or Cowboy Action or any of the other disciplines, support wildlife conservation efforts, where is the downside to that? Part of the money also is used for range development and hunter education activities which include a healthy focus on firearms safety in the field.

States must match the federal dollars a rate of 25 percent, the newspaper noted, “and revenue from the sale of hunting and fishing licenses must be directed to fish and wildlife restoration.”

What does all of this mean? All of those gun owners are doing their share, along with the gun and ammunition manufacturers, to conserve and enhance the nation’s wildlife populations. Without them, all wildlife would be in serious trouble, and wildlife benefits everyone, whether they be hunters, bird watchers, or somewhere in between.