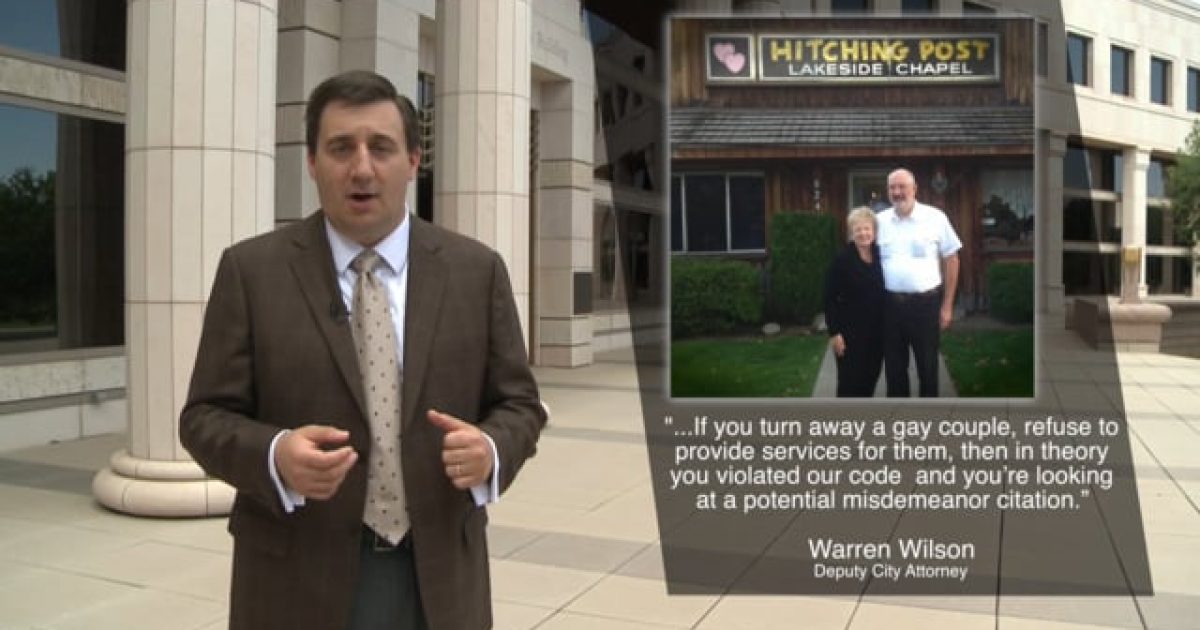 There are really two parts of the Gay marriage debate, the first is whether or not the courts/legislature has the right to legalize them. The second and IMHO the more important issue is whether government’s push to allow same-sex weddings should trample on the beliefs of those whose religion forbids them to participate in the same-sex weddings of others. In Phoenix, Arizona religious beliefs are trampled on and a pair of artists are fighting the law before they get charged.

It’s been crazy. Now things are getting downright surreal.

A case is unfolding in Phoenix, Arizona that seems ripped from the pages of some terrifying dystopian sci-fi novel from the last century. A pair of artists who live and work in Phoenix are fighting a legal battle against a city ordinance that would see them both serve time in prison. Phoenix has a so-called “non-discrimination” ordinance, which the city seems to believe can be used to force artists to create art that they find objectionable. Further, the ordinance:

“also prohibits businesses, including artists, from communicating any message publicly that would make someone feel “unwelcome” based upon the person’s sexual orientation, gender identity, or any one of a number of other characteristics, thus preventing many artists from explaining their position on marriage publicly without risking up to $2,500 fines and six months in jail for each day the artist violates the ordinance.”

While the city has not yet moved against these two artists or their studio, Brush & Nib, for their Christian beliefs, the threat they face is very real. Which is why they have filed a preliminary injunction in an effort to prove that the city ordinance is unconstitutional. Their legal team from the Alliance Defending Freedom (ADF) released a copy of the injunction to the media, here is some of what the brief contends:

Thus, whether public accommodations serve sandwiches or create custom art, Phoenix treats them exactly the same… By forcing Brush & Nib to create art for same-sex wedding ceremonies, [the ordinance] violates a cardinal free speech principle: speakers have the right to choose the content of their own message.

We simply value art too much to let Phoenix invade the artistic process as if Phoenix were regulating widgets… And make no mistake. Phoenix is playing favorites. It allows artists to speak and create in favor of same-sex marriage yet threatens to incarcerate artists if they speak or create only for opposite-sex marriage. We should all be concerned when the government tries to eradicate a particular idea by silencing adherents and forcing dissenters to profess orthodoxy. When the government manipulates the artistic marketplace and commandeers artists’ minds to squelch an idea, no idea is safe. Everyone eventually loses.”

Lid’s Note: Here’s the part I really don’t understand.  Why would anyone getting married, gay or straight, want to work with someone who wouldn’t want to work on their wedding. This case as is most of the cases making the news isn’t about a business refusing to serve someone who is gay (that should be illegal), it’s about a business refusing to work on a ceremony that conflicts with their religious beliefs.