It seems as though the embargo of aid to PA by the EU is like economic theory or a truce agreed to by the Palestinians. It looks good on paper, but doesn’t happen in real life. As if to prove that Hashem does miracles every day, the NY Times (yes THAT NY Times) reported today that aid to the Palestinians rose significantly since Hamas came to power and an embargo on aid was declared.

Salam Fayyad, the finance minister in the new Palestinian unity government, thinks the Palestinians received at least 250 percent more than that in direct support when cash from Iran and Arab nations is counted, as well as the amount smuggled in by Hamas officials after trips abroad.“I say the minimum for direct budgetary support was $880 million in 2006 compared to about $350 million the year before,” Mr. Fayyad said. He estimates total aid in 2006 was closer to $1.35 billion.

Wow someone must of told the NY Times that that information was a US state secret that would damage the war effort in Iraq. Any day now I am expecting a Rabbinical ruling that we need to change the Hagadda to say ” they lied about us, but with a strong arm you made them tell the truth—once.”

Aid to Palestinians Rose in ’06 Despite an Embargo 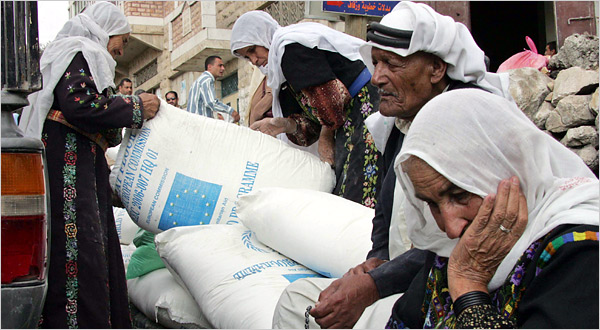 European food aid is delivered to Palestinians in Hebron. Europe alone is subsidizing a million people, a quarter of the Palestinian population.

By STEVEN ERLANGER
Published: March 21, 2007
JERUSALEM, March 20 — Despite the international embargo on aid to the Palestinian Authority since Hamas came to power a year ago, significantly more aid was delivered to the Palestinians in 2006 than in 2005, according to official figures from the United Nations, United States, European Union and International Monetary Fund.

Finance Minister Salam Fayyad estimates that the Palestinian Authority received more than twice the amount of budget support in 2006 than in 2005.

If The High Number Of Frontline Health Workers Rejecting The Vaccine Does Not Tell You The Truth Of The Matter, Nothing Will!
January 16th, 2021 Sons of Liberty Media