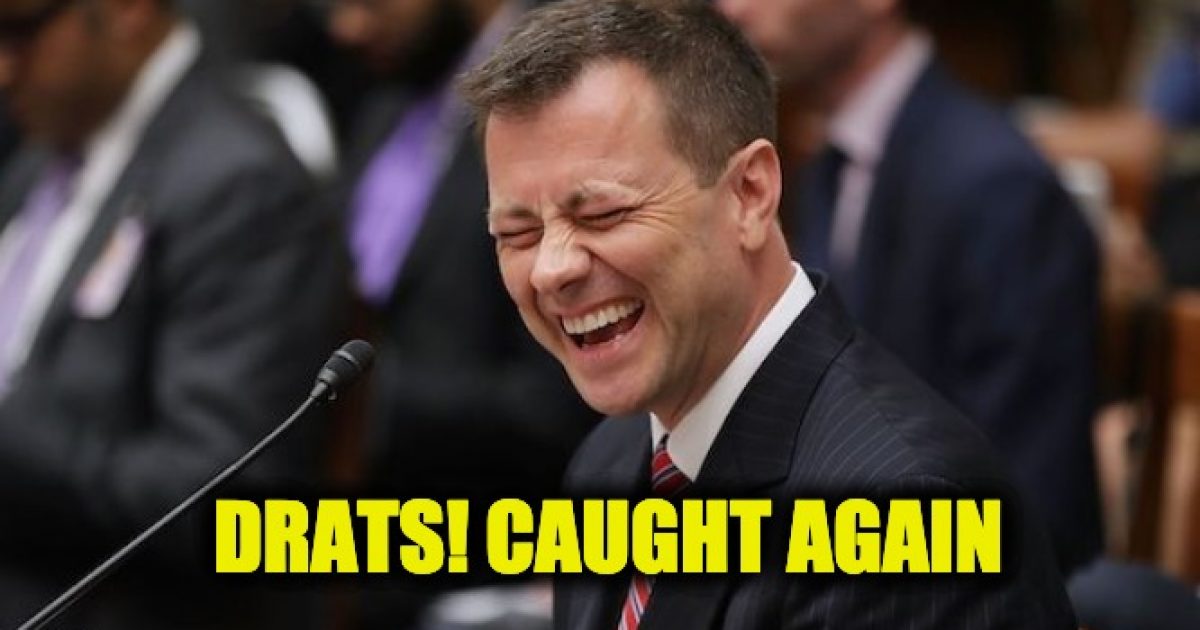 Fox News’ Catherine Herridge is reporting that a mid-August 2016 briefing given to the Trump Campaign by the FBI didn’t mention that two members of the campaign, Mike Flynn and George Papadopoulos were already under investigation.  Those briefings are specifically made to “warn the candidate and his team about national security threats.”

Rep John Ratcliffe (R-Tx) was on “America’s Newsroom,” Thursday morning and informed the network of the meeting, adding

And I can tell you what he wasn’t told: He wasn’t warned about a Russia investigation that Peter Strzok had opened 18 days earlier.”

Oh, and the person who was supposed to tell the campaign about the investigation was the FBI-lover boy himself Peter Strzok. Not only did Strzok lead the Trump-Russia investigation at its onset, but he was also led the Hillary Clinton mail server investigation.

A source familiar with sensitive records documenting the August briefing told Fox News that Strzok was in a unique — and apparently conflicted — position. Strzok opened the FBI investigation into Russian outreach to Trump campaign aides, while at the same time he was supposed to be warning the Trump campaign about Russian activities.

Strzok set up times to rehearse. In an Aug. 13 text to Page, Strzok said, “Im going to have (redacted) do his CI (counterintelligence) brief presentation for me and Jon and (redacted) on Mon afternoon.”

Sources tell Fox News the first redaction is believed to be FBI agent Joe Pientka, who interviewed then-National Security Adviser Mike Flynn along with Strzok in January 2017 and who is also believed to be the handler for Justice Department official Bruce Ohr.  After the FBI fired dossier author Christopher Steele for contact with reporters in the fall of 2017, Steele was able to maintain contact with the bureau through Ohr.

Two days after he sent those texts about the briefing practice sessions, Peter Strzok sent his scandalous “insurance policy” text to his lover Lisa Page.

“I want to believe the path you threw out for consideration in Andy’s office – that there’s no way he gets elected – but I’m afraid we can’t take that risk, it’s like an insurance policy in the unlikely event you die before you’re 40.”

Strzok also texted Page, “[expletive] Trump,” and called him a “[expletive] idiot.” At one point, Page suggested that his presence on the Trump investigation allowed him to “protect the country.”

“Maybe you’re meant to stay where you are because you’re meant to protect the country from that menace,” Page wrote. “I can protect our country at many levels, not sure if that helps,” Strzok replied.

The 300+ pages of text messages between the two lovers released to Congress were the first actual proof that the investigation of the Trump campaign was a witch hunt.

As Strzok and Page often wrote about their hatred for Trump in those texts referring to the future President as an “idiot” and “d*uche,” while fearing his potential victory as “terrifying.”

Hopefully, one of the ongoing investigations of the investigators will be able to prove that Strzok’s animosity toward Trump was the reason he didn’t tell the Trump campaign about the investigation as he was his responsibility. Or was he given that responsibility to make sure the campaign wouldn’t be told what was happening, as Rep Ratcliffe asked:

“Why would Peter Strzok, who would participate at [former FBI director] Jim Comey’s direction in a defensive briefing designed to protect and warn a candidate, be the same person who is in fact at that time already investigating the candidate’s campaign? That shouldn’t happen. There should be answers to those questions,” he said.

When America gets those answers, hopefully someone will be going to jail.