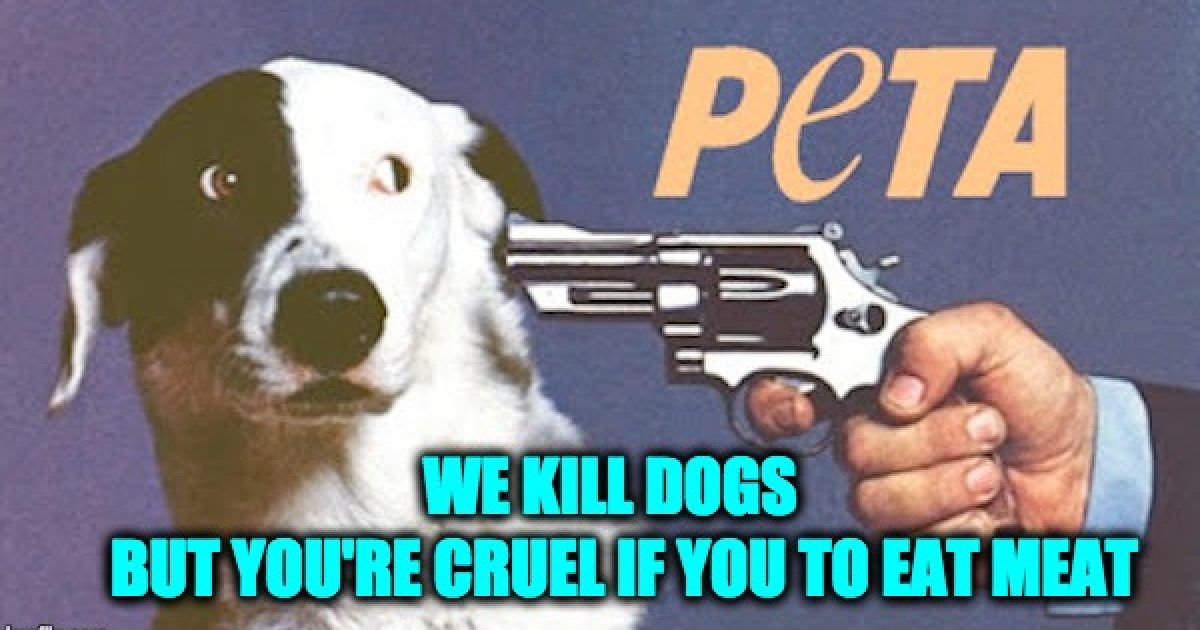 There are few things in this world that are as simultaneously annoying and hilarious as PETA, or, the People for The Ethical Treatment of Animals.

Much like the cults of Crossfit and veganism today, PETA began as a small but vocal number of heavily opinionated twerps who simply wouldn’t take “no” for an answer.  While this stubbornness is often considered a positive trait, especially in certain fields of work, when it comes to leisure activities and activism, this arrogance and self-assurance can be an enormous deterrent to the general population.

In PETA’s case, however, their tactics have been shown to be so incredibly vile that they are constantly being opposed by a vast majority of Americans.  Anti-PETA campaigns have sprung up around the nation in order to dam the river of rhetoric flowing forth from the organization.

The beef with PETA, (pun entirely intended), begins and ends with the group’s hypocritical stance on household pets in which the organization’s creed is in direct opposition to the rest of the world’s stance.  PETA, at its core, believes that animals should be wholly liberated from the human race, meaning that, in PETA’s ideal world, not only would be stop harvesting and farming animals for sustenance, but we would also end the practice of keeping animals as pets.

Further infuriating the opponents of the group is the fact that PETA does take in a number of stray cats and dogs in what they falsely claim is a “rescue effort”, only to euthanize well over 90% of their catch in order to keep them out of the hands of potential pet owners.  This is has been well-documented thanks to the group’s government-protected status and the requisite public filings that come with the distinction.

Now, PETA is back in the headlines, (their favorite place), with a new campaign meant to deter the world from consuming animals for nutrition.  This time, however, PETA isn’t coming for Fido and Fluffy.  Now the group wants all of the Franklins from your wallet.

“As reported by Bloomberg Law:

“Excise taxes on beef, pork, and chicken could be the next big thing in a state and local tax environment that’s already comfortable with ‘sin tax’ regimes aimed at cigarettes, alcoholic beverages, and gambling and is adapting quickly to special levies on sugar-sweetened beverages, greenhouse gases, and marijuana.

“While there are no current legislative proposals imposing state or local surcharges on meat, a growing number of public health, environmental, and animal rights advocates are bullish on tax schemes addressing the mounting social costs of meat production and consumption.

“’We have never been closer to a meat tax,’ said Ashley Byrne, associate director of campaigns for People for the Ethical Treatment of Animals (PETA). ‘We have seen people—including meat eaters—realizing that meat is bad for their health and meat is taking this incredible toll on the environment. People seem more open than ever to an excise tax on meat. If we are going to tax tobacco, if we are going to tax soda, it absolutely makes sense to have a similar tax on meat.’”

That’s right folks:  A meat tax brought to you by your friendly, neighborhood PETA twerps.

As if the group hadn’t already made an inexcusably poor impression on the world with their incessant slaughtering of dogs and cats, now they are looking to dig into your hard-earned paycheck every time you put dinner on the table.

If God did not intend for us to eat animals, then why did he make them out of meat?