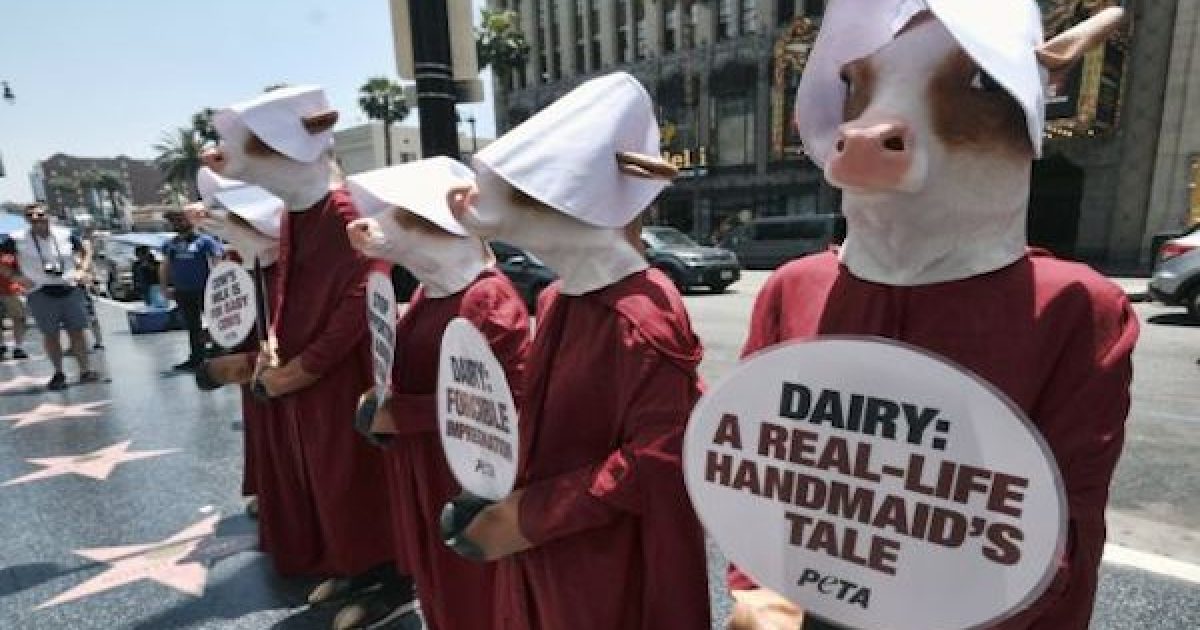 When I was a child, my Mom used to make me have a glass of milk before I left for school in the morning, and more at bedtime.  At the time she said it was healthy and built strong bones.  But according to PETA, she was turning me into a white supremacist.

For those of you who just did a Danny Thomas “spit take” of your milk, or who laughed a sip of milk through your nose, allow me to assure you this isn’t an attempt to milk some laughs for the site—it is true.

Cows’ milk has long been a symbol used by white supremacists.

White supremacists are guzzling cow milk in an effort to mock people of color who are lactose intolerant ???? https://t.co/HyCzd4wfjc

Wait a blooming second! People of color? Does PETA know that others suffer from intolerance to lactose? “Three-quarters of all Jews cannot digest this milk sugar, as compared to 90 percent of Asian-Americans” Is drinking milk and indication of Antisemitism? No Way! Voting for Democrats may be but not drinking milk.  And are Jews who drink milk self-hating? And if 90% of Asian-Americans are lactose intolerant, does that mean that people who drink milk hate Asian-Americans?  What of those self-hating Jews who drink milk, if they hate Asian-Americans where do they eat on Christmas Day when Jews go to Chinese restaurants?  And if we didn’t buy cartons of milk how would we know that there were missing children?

PETA points to a  press release from 2017 to make their anti-milk point:

“Aside from ‘lactose-tolerant’ white supremacists, cow’s milk really is the perfect drink of choice for all (even unwitting) supremacists, since the dairy industry inflicts extreme violence on other living beings,” the organization said in part.

“PETA is trying to wake people up to the implications of choosing this white beverage and suggesting that they choose something else pronto,” the statement continues.

(…) Some people might be surprised to learn that cows used by the dairy industry are slaughtered after about five years because their bodies are so spent from being kept constantly pregnant.

I think the term for cows being slaughtered after five years should be steak dinner.

But if you need more proof that the idea of milk being linked to white supremacy is simply idiocy, know that the NY Times agrees with PETA. In an article published on October 17 of this year called Why White Supremacists Are Chugging Milk (and Why Geneticists Are Alarmed), the Times wrote:

One slide Dr. Novembre has folded into his recent talks depicts a group of white nationalists chugging milk at a 2017 gathering to draw attention to a genetic trait known to be more common in white people than others — the ability to digest lactose as adults. It also shows a social media post from an account called “Enter The Milk Zone” with a map lifted from a scientific journal article on the trait’s evolutionary history.

In most of the world, the article explains, the gene that allows for the digestion of lactose switches off after childhood. But with the arrival of the first cattle herders in Europe some 5,000 years ago, a chance mutation that left it turned on provided enough of a nutritional leg up that nearly all of those who survived eventually carried it. In the post, the link is accompanied by a snippet of hate speech urging individuals of African ancestry to leave America. “If you can’t drink milk,” it says in part, “you have to go back.”

I know, just like the NY Times to jump on a radical leftist agenda.

But this is ridiculous! Just because a few white supremacist idiots drink milk doesn’t mean that everyone else drinking it is a supremacist. I don’t care what they say, dunking my chocolate chip cookies into a cold glass of milk is one of the true joys of this existence.

What happened to milk consumption being correlated to strong bones and healthy children? Where did the dairy industry’s marketing go wrong? Maybe this has nothing to do with the ‘got milk’ campaign at all.

Maybe, just maybe, animal rights activists have figured out there’s really nothing scary about how dairy farmers treat their animals.

All I know is that we live in a time of racial tension in America and animal rights activist groups like PETA will do whatever it takes to bash dairy farmers and keep Americans from drinking milk, even if that means slapping a racists label on the 90% of Americans who drink milk on a regular basis.

And to close out, there may be those of you who do not know what is a Danny Thomas “spit take,” please watch the  short video below: