Pence Slams CNN: Your Network Was ‘Wrong About a Lot’ Regarding Pandemic (WATCH) 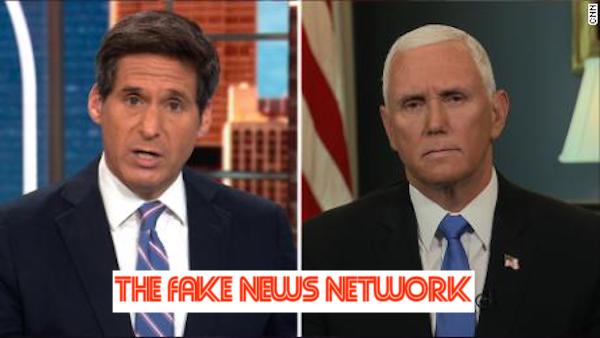 Vice President Mike Pence fired back at CNN interviewer John Berman during a tense exchange, noting the network was “wrong about a lot” regarding the coronavirus pandemic.  Pence slammed CNN

Berman spent a majority of the interview doing the bidding of the higher-ups. He repeatedly talked over Pence, hitting him with ridiculous gotcha questions, and treating him with a level of disrespect you will never, ever, ever see a CNN reporter dole out to Kamala Harris.

The “New Day” reporter first asked the Vice President to predict how many Americans will die from coronavirus – a question only God himself could answer.

And, we might add, a question in which any answer ranging from 1 to infinity would have made it easy for the biased national media to cast him and the President as murderers.

Over 1,000 people died from coronavirus on Thursday, according to Johns Hopkins University.
Vice President Mike Pence on US death toll: “Never been a day gone by we haven’t thought about families who have lost loved ones in the midst of this pandemic.”https://t.co/n0sp3k6CNc pic.twitter.com/e1cJNIQmXo

Pence, being smarter than that, pivoted to pointing out all of the measures the administration has taken to save lives.

“I truly believe that when President Trump suspended all travel from China before the end of January and stood up the White house coronavirus task force, and action that Joe Biden criticized as xenophobic, he actually said it was racist to suspend travel from China, the reality is, that bought us an invaluable amount of time to begin work on a vaccine,” Pence said.

Berman, though, wanted the low-information audience to know that he had asked his big gotcha question, bragging, “My question just so people know, was ‘How many more Americans will lose their lives by the end of the year?”

The reporter noted that Pence made comments in June claiming “the panic is overblown,” to which the Vice President explained that things change along the way.

“CNN was wrong about a lot early in the year as well, John,” Pence returned fire. “We’ve all been learning all along the way about this coronavirus.”

Mike Pence clashes with CNN anchor on COVID-19 response: Your network “was wrong about a lot” in early stages https://t.co/EqHnm73Jvu pic.twitter.com/XQMUywAJiF

Wrong About a Lot

The media, of course, downplayed the virus very early on, as did many Democrat politicians. But you won’t hear them accepting responsibility for – or even admitting – being wrong.

Berman, for instance, won’t be discussing CNN having declared that “racist assaults and ignorant attacks against Asians” were spreading faster than the pandemic.

The Washington Post said the flu is a “much bigger threat than coronavirus.”

The New York Times claimed that fear “spreads faster than the coronavirus itself.”

Pelosi, touring San Fran’s Chinatown Feb. 24: “We do want to say to people, come to Chinatown, here we are … come join us” pic.twitter.com/0FEOq9t4VM

Mayor Bill de Blasio told New York City residents to “get out on the town despite coronavirus.”

Newsweek hypocrites said rioting in the streets was okay despite the pandemic because “racism is a public health crisis too.”

The CDC, up until April, said the only people who need to wear a face mask are those who are sick or are caring for someone who is ill and unable to wear a mask.

It would seem nearly everybody was wrong about some facet of this pandemic over time. Good on Mr. Pence calling out CNN for their ridiculous holier than thou attitude as things have changed.