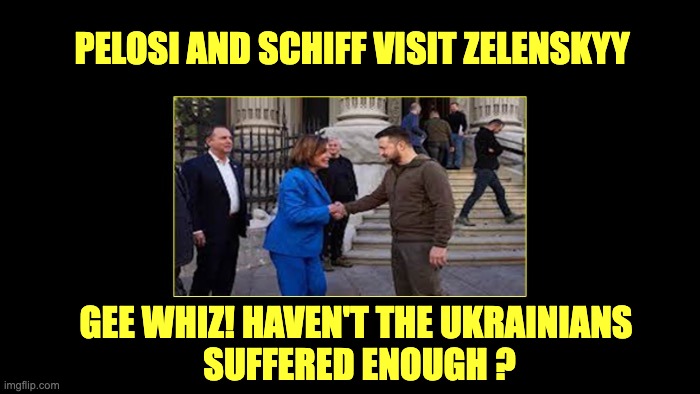 On an unannounced trip to Kyiv, Nancy Pelosi and a group of Democrats met with Ukraine President Zelensky. The Pelosi visit smacks of political grasping at straws in hopes of finding the slightest bit of positivity toward the elections in November. Zelensky asked for Biden. He got Pelosi. Pelosi? Gee whiz, haven’t the Ukrainians suffered enough? Maybe that was the better of the three choices, but the poll numbers are still underwater all the way around.

The Pelosi visit: reassurance and promises?

Accompanying Pelosi were Chairman Jim McGovern, Chairman Gregory Meeks, Chairman Adam Schiff, Congresswoman Barbara Lee, Congressman Bill Keating, and Congressman Jason Crow. (Note: It is not true that Schiff said he had evidence that Zelenskyy was a tool of Putin)

“Our delegation traveled to Kyiv to send an unmistakable and resounding message to the entire world: America stands firmly with Ukraine.  Our meeting with President Zelenskyy began with him thanking the United States for the substantial assistance that we have provided.  He conveyed the clear need for continued security, economic and humanitarian assistance from the United States to address the devastating human toll taken on the Ukrainian people by Putin’s diabolic invasion – and our delegation proudly delivered the message that additional American support is on the way, as we work to transform President Biden’s strong funding request into a legislative package.  Our delegation conveyed our respect and gratitude to President Zelenskyy for his leadership and our admiration of the Ukrainian people for their courage in the fight against Russia’s oppression.”

Nancy Pelosi statement Link to the press conference in Poland is here. 48 minutes.) All of the delegates spoke.

From Kyiv, the delegation headed to Warsaw and the southeast of Poland. They met with the Polish President, and hopefully, they didn’t giggle like “VP” Harris.

Secretary of Defence Austin and Secretary of State Blinken made the same excursion last weekend. Keep in mind with this group of Democrats, no matter who they are: the horrors of war are just that: horrors. There were no photographs of this delegation out in the streets of Kyiv, nor on the ground at any of the other places where atrocities were committed as there were with UK Prime Minister Boris Johnson. Of course, Pelosi was wearing heels, so walking over rubble would have been difficult anyway. Besides, she prefers to walk over American rights.

The intent of this trip was to show US support for Ukraine, and the Pelosi visit showed that. The US still needs to replenish our weapons supplies.