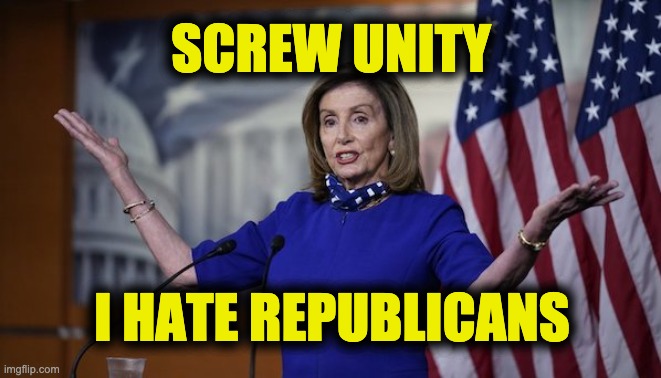 Out of one side of their mouths, Democrats say they want unity, but on the other side, they spew the same old hateful slurs about their political opponents. Thursday, House Speaker Nancy Pelosi, D-Calif., referred to Republican members of the House of Representatives as the “enemy within the House of Representatives” while speaking with reporters. Pelosi the enemy within.

“We will probably need a supplemental for more security for members when the enemy is within the House of Representatives…in addition to what is happening outside,” she said, according to CNN Politics and others.

After 30 members sent a letter asking to use congressional funds for security, Pelosi says, “We will probably need a supplemental for more security for members when the enemy is within the House of Representatives…in addition to what is happening outside” https://t.co/bM4co7aVpQ pic.twitter.com/mp4riI63Zc

Reporters asked her to clarify her remarks:

“So,” Breitbart’s Joel Pollack correctly tweeted, “if you exercise your 2nd Amendment rights after a deadly riot, you are an ‘enemy.’”

.@SpeakerPelosi referred to certain members of Congress as the "enemy within." When asked what she meant she said there are members who want to carry guns (like @RepBoebert who carries legally). So if you exercise your 2nd Amendment rights after a deadly riot, you are an "enemy."

Lauren Boebert (R-CO) is the co-chair of the House of Representative’s Second Amendment Caucus and has been outspoken about her commitment to carry a gun in D.C.

In a December 23, 2020, exclusive interview with Breitbart News, Boebert said, “I am my security.”

She added, “Washington, DC, like most Democrat-run cities, has a violent crime problem, so I certainly need a way to protect myself and I will be carrying each and every day.”

Following the January 6, 2021, Capitol riots Breitbart News reported that Rep. Thomas Massie (R-KY), the other co-chair of the Second Amendment Caucus, talked about how comforting it was to be armed when the rioters struck.

Massie said, “The next member who argues Congressmen shouldn’t be allowed to carry firearms at work needs to be laughed out of the Capitol.”

But it seems that Pelosi’s inflammatory rhetoric is much more disturbing than the idea of responsible House members exercising their rights under the Constitution.

Seems to me the Speaker calling members of Congress "enemies" is reason alone for them to carry.

In fact, it could be seen as inciting violence:

This rhetoric from @SpeakerPelosi could incite violence against members of the GOP in the House.

Impeach and remove her. https://t.co/aNwr3bDzh6

Empress Pelosi needs to get rid of the violent rhetoric.

Yes, she does.  And to think Trump was impeached for FAR less than this…

Rs should avoid baseball fields for the foreseeable future.

Indeed.  For those who may not understand the reference, simply Google “Steve Scalise.”

Scalise, by the way, was nearly killed by a deranged leftist.  That deranged leftist, for those who may not remember, was hailed as a hero by many on the left, including members of the liberal media.

So, will Pelosi ever face any official backlash for this?  Probably not, because as one person wryly noted on Twitter:

Democrats have no no-nos.

But it’s all in the interest of unifying the country, right?

Pelosi the enemy within.